Political ideologies in the United States 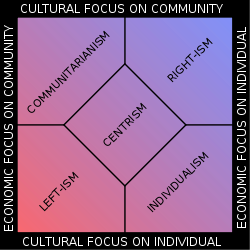 A multi-axis political spectrum chart; a variant of the Nolan chart

Political ideologies in the United States vary considerably. Persons in the U.S. generally classify themselves either as adhering to positions along the political spectrum as liberal-progressive, moderate, or conservative. Modern American liberalism aims at the preservation and extension of human, social and civil rights as well as the government guaranteed provision of positive rights. It combines social progressivism and to some extent, ordoliberalism and is highly similar to European social liberalism. American conservatism commonly refers to a combination of economic liberalism and libertarianism, and to an extent, social conservatism. It aims at protecting the concept of small government, while promoting traditional values on some social issues.

The ideological position a person or party takes may be explained in terms of social and economic policy. The ideological positions a person assumes on social and economic policy issues may differ in their position on the political spectrum. Milton Friedman, for example, was left-of-center on social issues but right-of-center on fiscal matters.[1] Several ideological demographics may be identified in addition to or as subgroups of liberals and conservatives with nearly every possible ideology being found in the general population.

In the United States, the major parties overlap heavily in terms of ideology, with the Democrats more to the left and the Republicans more to the right. Social scientists Theodore Caplow et al. argue, "the Democratic party, nationally, moved from left-center toward the center in the 1940s and 1950s, then moved further toward the right-center in the 1970s and 1980s."[2] Small parties such as the Libertarian Party play a minor role in American politics.

The size of ideological groups varies slightly depending on the poll. Gallup/USA Today polling in June 2010 revealed that 42% of those surveyed identify as conservative, 35% as moderate, and 20% as liberal.[3] In another polling in June 2010, 40% of American voters identify themselves as conservatives, 36% as moderates and 22% as liberals, with a strong majority of both liberals and conservatives describing themselves as closer to the center than to the extremes.[4] As of 2013, self-identified conservatives stand at 34%, moderates at 38%, and liberals at 23%.[5]

In a 2005 study, the Pew Research Center identified nine typological groups. Three groups were identified as part of each, "the left," "the middle," and "the right." In this categorization system, "the right" roughly represents the Republican base, those on "the left" the Democratic base and those in "the middle" independents. Within the left are the largely secular and anti-war "Liberals", the socially conservative but economically left "Conservative Democrats", and the economically "Disadvantaged Democrats" who favor extended government assistance to the needy.[6] In "the middle" are the optimistic and upwardly mobile "Upbeats", the discouraged and mistrusting "Disaffecteds," and the disenfranchised "Bystanders." The right compromises the highly pro-business "Enterprisers," the highly religious "Social Conservatives" (also known as the Christian right), and the "Pro-Government Conservatives" who are largely conservative on social issues but support government intervention to better their economic disposition.[6]

File:Typological gourps US copy.jpg
Typological groups according to the Pew Research Center.

Liberalism and conservatism are the most common ideologies in the U.S. apart from those who identify as moderate. Individuals embrace each ideology to widely varying extents. Liberals and progressives commonly advocate strong civil liberties, social progressivism, cultural pluralism, government ensuring of positive rights (education, health care, etc...) and a mixed economy.[7] Conservatives commonly defend the notional status quo of some point in the past, believing that the Nation has deviated significantly from it and advocating more traditional stands on social issues, protection of gun rights and much less government intervention.[6]

Moderates, who may be left or right leaning, incorporate different aspects from liberalism and conservatism into their personal perspective. According to recent polls moderates are commonly identified as the second largest group, closely trailing conservatives, constituting between 36% and 39% of the population.[8][9] Moderates are commonly defined through limiting the extent to which they adopt liberal and conservative ideas. CNN exit polls have found moderates to be rather evenly divided between the country's two main parties.[10][11][12]

In the United States modern conservatism coalesced in the latter half of the 20th century, responding over time to the political and social change associated with events such as the Great Depression, tension with the Soviet Union in the Cold War, the Civil Rights Movement, the counterculture of the 1960s, the deregulation of the economy in the late 1970s and early 1980s, the overthrow of the New Deal Coalition in the 1980s, and the terrorist threat of the 21st century. Some of the most supported political issues among conservatives are economic liberalism, fiscal conservatism, and a form of social conservatism that is more appealing to the Christian Right.

Roughly one third, 36%, to 42%[3] of the American public self-identify as "conservative." Conservatives commonly outnumber liberals in the general public with both ideological groupings being outnumbered by centrists.[8] The military-industrial complex in particular remains a conservative bastion.[15][16] A 2003 survey by the Military Times found that the "military considers itself clearly more conservative and Republican." In a December 2006 poll, 46% of active personnel identified as Republican, down from 60% in 2004.[17] In the 2000, 2004 and 2006 elections CNN exit polls found that roughly 80% of self-described conservatives voted Republican.[10][11][12]

A study by the Pew Research Center, where research assigned typological classifications based on responses to policy and ideological questions, found that a significant percentage of Democratic voters were social conservatives who only voted for the Democratic party due to their more left-leaning economic methods, as well as their longtime affiliation with the party especially among Dixiecrats and blacks. This study divided conservatives into four groups: Enterprisers, Social Conservatives, Pro-Government Conservatives, and Conservative Democrats. Of the conservative groups, Conservative Democrats were the most common typological group comprising 14% of respondents while Enterprisers and Pro-Government Conservatives were the least common among the conservative groups at 9%. Enterprisers had the second highest percentage of college graduates (46%) behind Liberals, and were tied with Liberals percentage wise on those who have household incomes of $75,000 or more (41%), while actually having a higher percentage of people who have household incomes of $50,000 or more (62%). All conservative demographics were religious with less than 10% of respondents identifying as "secular," compared to 22% among liberals.[6]

Liberalism in the U.S. is most commonly characterized by a mixture of social liberalism and progressivism, with a strong (if frequently unrecognized) ordoliberal streak. Less frequently it may also describe forms of classic and neoliberalism. Liberals in the United States advocate strong civil liberties and social progressivism according to which societal practices need to be changed whenever necessary for the greater good of society or the benefits of those who wish to engage in those social arrangements. They believe that government action is needed in order for people to be as free as possible. Government must thereby ensure the provision of positive rights, protect civil liberties and ensure equality. American liberals commonly reject both laissez-faire capitalism and socialism as means to distribute economic resources. A mixed economy, that is a capitalist free market economy with limited government regulation and intervention is seen as the ideal. Recently, there has been a strong movement among liberals against corporate welfare, which is generally favored by pro-government conservatives. Cultural pluralism is quite common among American liberals.[7]

According to the Pew Research Center liberals are particularly distinguished from any other typographic group by their socially progressive viewpoints. In 2004, liberals were the only group to advocate same sex marriage and euthanasia, policies regarded as left of the Democratic Party. Among the most prominent liberal periodicals are The Nation, The American Prospect, and The New Republic. The New Republic described its political standing, giving a brief overview of contemporary American liberalism, in a June 2006 editorial stating it was "very much against the Bush tax programs, against Bush Social Security 'reform,' against cutting the inheritance tax, for radical health care changes, passionate about Gore-type environmentalism, for a woman's entitlement to an abortion, for gay marriage, for an increase in the minimum wage, for pursuing aggressively alternatives to our present reliance on oil and our present tax preferences for gas-guzzling automobiles."[19]

Roughly 19% to 26% of the American public is liberal depending on survey and method.[8] Liberals vote mostly in favor of the Democratic Party, constituting roughly 43% of the Democratic base.[6][10][11][12] Liberalism tends to be most prominent in academia and among those with higher levels of education.[20] In 2004, 72% of full-time faculty members at four-year colleges identified as liberal.[21] In a 2004 survey of 1,000 economists, registered Democrats outnumbered registered Republicans by a 2.5 to 1 ratio. The majority of economists favored "safety regulations, gun control, redistribution, public schooling, and anti-discrimination laws", while opposing "tighter immigration controls, government ownership of enterprise and tariffs."[22] Among sociologists and anthropologists, Democrats outnumber Republicans 20 to 1.[23]

Over the past decades,[when?] the political outlook of Americans has become more progressive, with those below the age of thirty being considerably more liberal than the overall population. According to recent polls, 56% of those age 18 to 29 favor gay marriage, 68% state environmental protection to be as important as job creation, 52% "think immigrants 'strengthen the country with their hard work and talents,'" 62% favor a "tax financed, government-administrated universal health care" program and 74% "say 'people's will' should have more influence on U.S. laws than the Bible, compared to 37%, 49%, 38%, 47% and 58% among the general population.[24]

It is also shown by the Pew Research Center that conservatives tend to have stronger belief in personal empowerment than liberals. Among the wealthiest and most educated group of conservatives, the Enterprisers, 95% believed that most people can get ahead in life if they work hard. Despite having similar income and education levels, only 53% of Liberals agreed with Enterprisers on the issue while 39% disagreed and another 5% refused to answer.[25] Even among the poorest and least educated groups of both the conservatives (the Pro-Government Conservatives) and the left-wing (the Disadvantaged Democrats), these differences in opinion about personal empowerment are apparent. While 74% of Pro-Government Conservatives believed that people can get ahead with hard work, only 14% of Disadvantaged Democrats agreed while 79% disagreed and the other 7% refused to answer.[26]

Further information: Demography of the United States
File:Ideology US copy.jpg
Percent of all survey respondents, voters and college graduates by typological demographic.[18]

The socially progressive Liberals and staunchly conservative Enterprisers are tied as the two most affluent groups, while Liberals are the most educated. Liberals have a slightly higher percentage of college graduates than Enterprisers; 49% of versus 46% of Enterprisers. Bystanders, those who chose not to participate in the political process, have the least percentage of college graduates (11%) and are tied with Disadvantaged Democrats as the most financially distressed.[6]

Generally, education and affluence increase the chances of an individual to be politically active. The professional class, which is relatively evenly divided among Democrats and Republicans,[13] is among the most politically active,[27] while those in the lower class – the working poor and underclass – commonly abstain from taking part in the political process.[28] The working class has become less politically active, partially due to a decline in the prevalence of labor unions.[29] As a result, the American electorate is considerably more affluent and educated than the general population. In the 2006 mid-term elections, for example, those with graduate degrees, who constitute 9% of the general population age 25 or older, comprised 16% of the electorate.[12] All sizable socio-economic groups were relatively split between the two major parties in the 2000, 2004 and 2006 elections.[10][11][12]

Education, up to the undergraduate level, increased a person's chances of him or her voting Republican. The contradiction is explained through moderate voters who tend to become more conservative as they become more economically prosperous.[6] At the post-graduate level, liberals outnumber conservatives and a majority commonly votes Democratic.[10][11][12]

Ideological groups are distinguished by certain societal attributes, such as religion, marital status, education, and gun ownership, yet are relatively similar in terms of race and ethnicity. Generally liberals were more likely to be secular, single and in possession of a college degree, while less likely to own a gun.[citation needed] Conservatives, most of whom adhere to social as well as fiscal conservatism, tended to be far more religious and more likely to be married and own firearms.[citation needed]