Timeline of United States inventions (after 1991) 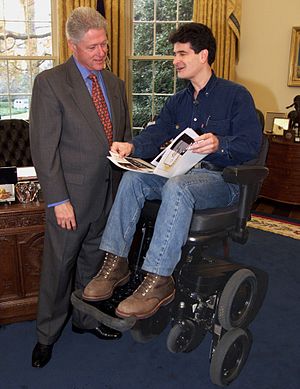 Dean Kamen (b. 1951) demonstrating his iBOT invention to President Bill Clinton in the Oval Office.

In 1641, the first patent in North America was issued to Samuel Winslow by the General Court of Massachusetts for a new method of making salt.[1][2][3] On April 10, 1790, President George Washington signed the Patent Act of 1790 (1 Stat. 109) into law which proclaimed that patents were to be authorized for "any useful art, manufacture, engine, machine, or device, or any improvement therein not before known or used."[4] On July 31, 1790, Samuel Hopkins of Pittsford, Vermont became the first person in the United States to file and to be granted a patent for an improved method of "Making Pot and Pearl Ashes."[5] The Patent Act of 1836 (Ch. 357, 5 Stat. 117) further clarified United States patent law to the extent of establishing a patent office where patent applications are filed, processed, and granted, contingent upon the language and scope of the claimant's invention, for a patent term of 14 years with an extension of up to an additional 7 years.[4] However, the Uruguay Round Agreements Act of 1994 (URAA) changed the patent term in the United States to a total of 20 years, effective for patent applications filed on or after June 8, 1995, thus bringing United States patent law further into conformity with international patent law.[6] The modern-day provisions of the law applied to inventions are laid out in Title 35 of the United States Code (Ch. 950, sec. 1, 66 Stat. 792).

From 1836 to 2011, the United States Patent and Trademark Office (USPTO) has granted a total of 7,861,317 patents[7] relating to several well-known inventions appearing throughout the timeline below.

A CMOS image sensor (complementary metal-oxide semiconductor) is an image sensor consisting of an integrated circuit containing an array of pixel sensors, each pixel containing a photodetector and an active amplifier. Starting at the same point, they have to convert light into electrons by using the CMOS process. CMOS image sensors can be found in digital SLR cameras, embedded web-cams, video cameras, automotive safety systems, swallowable-pill cameras, toys and video games, and wireless video-security networks. The renowned American physicist and engineer Eric Fossum invented the CMOS image sensor while working at NASA's Jet Propulsion Laboratory in Pasadena, California.[9][need quotation to verify] On January 28, 1994, Fossum filed U.S. patent #5,471,515, which was issued to him on November 28, 1995.[10]

DNA computing uses DNA, biochemistry and molecular biology, instead of the traditional silicon-based computer technologies. DNA computing, or, more generally, molecular computing, is a fast-developing interdisciplinary area.[citation needed] Research and development in this area concerns theory, experiments and applications of DNA computing. DNA computing is fundamentally similar to parallel computing in that it takes advantage of the many different molecules of DNA to try many different possibilities at once. Leonard Adleman of the University of Southern California initially pioneered this field in 1994. Adleman demonstrated a proof-of-concept use of DNA as a form of computation which solved the seven-point Hamiltonian path problem.[11]

File:PTtopview.jpg
A top-down view of a Segway PT

The Segway PT is a two-wheeled, self-balancing, zero-emission, electric vehicle used for "personal transport". Segways have had success in niche markets such as transportation for police departments, military bases, warehouses, corporate campuses or industrial sites, as well as in tourism. The earliest patent resembling the modern Segway PT, U.S. patent #6,357,544, was filed on May 27, 1994 and issued to Dean Kamen on December 30, 1997.[12] Kamen introduced his invention to the public in 2001.[13]

A quantum cascade laser is a sliver of semiconductor material about the size of a tick. Inside, electrons are constrained within layers of gallium and aluminum compounds, called quantum wells are[clarification needed] nanometers thick, much smaller than the thickness of a hair. Electrons jump from one energy level to another, rather than moving smoothly between levels and tunnel from one layer to the next going "through" rather than "over" energy barriers separating the wells. When the electrons jump, they emit photons of light. The quantum cascade laser was co-invented by Alfred Y. Cho, Claire F. Gmachl, Federico Capasso, Deborah Sivco, Albert Hutchinson, and Alessandro Tredicucci at Bell Laboratories in 1994.[14] On April 4, 1994, the Bell Labs team filed U.S. patent #5,457,709 that was issued on October 10, 1995.[15]

Slingshot is a portable water purification device powered by a stirling engine running on a combustible fuel source. The size of a dorm fridge, the Slingshot is claimed to be capable of turning any water source such as urine, saltwater, and arsenic into drinking water. Dean Kamen invented the Slingshot.[32] Kamen filed U.S. patent # 7,340,879 on November 13, 2003 for the device which was issued on March 11, 2008.[33]

A nanowire battery is a lithium-ion battery consisting of a stainless steel anode covered in silicon nanowires. Silicon, which stores ten times more lithium than graphite, allows a far greater energy density on a steel anode, thus reducing the mass of the battery. The high surface area further allows for fast charging and discharging. The practicality of nanowire batteries is reasoned that a laptop computer that runs on a regular lithium-ion battery for two hours could potentially operate up to 20 hours using a nanowire battery without recharging, which would be a considerable advantage for many people resulting in energy conservation and cost savings. The nanowire battery was co-invented in 2007 by Chinese-American Dr. Yi Cui, an assistant professor of materials science and engineering along with his colleagues at Stanford University.[34][35]

Trongs are gripping and lifting tools which are made up of three limbs, or finger-channels, each with teeth on the end of them. They are generally made of polypropylene and are dishwasher safe. Trongs are designed for eating finger food such as buffalo wings and barbecue ribs so that the user doesn't get his or her fingers messy. They are used in pairs so that the user has one for each hand. Trongs were co-invented in 2007 by two New Yorkers, Eric Zimmermann and Dan Ferrara Jr.[39] Zimmermann and Ferrara filed U.S. patent #12,682,890 on August 8, 2008 which was issued on February 24, 2011.[40]