Agriculture in the United States 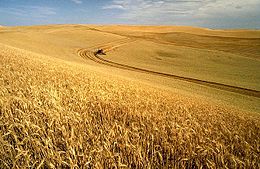 A wheat harvest in Idaho 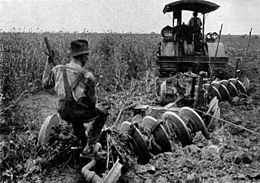 This photo from a 1921 encyclopedia shows a tractor ploughing a crop field.

Agriculture is a major industry in the United States, which is a net exporter of food.[1] As of the 2007 census of agriculture, there were 2.2 million farms, covering an area of 922 million acres (3,730,000 km2), an average of 418 acres (1.69 km2) per farm.[2] Although agricultural activity occurs in most states, it is particularly concentrated in the Great Plains, a vast expanse of flat, arable land in the center of the United States and in the region around the Great Lakes known as the Corn Belt.[3] The United States was a leader in seed improvement i.e. hybridization and in expanding uses for crops from the work of George Washington Carver to the development of bioplastics and biofuels. The mechanization of farming, intensive farming, has been a major theme in U.S. history, including John Deere's steel plow, Cyrus McCormick's mechanical reaper, Eli Whitney's cotton gin to the widespread success of the Fordson tractor and the combine harvesters first made from them. Modern agriculture in the U.S. ranges from the common hobby farms, small-scale producers to large commercial farming covering thousands of acres of cropland or rangeland. 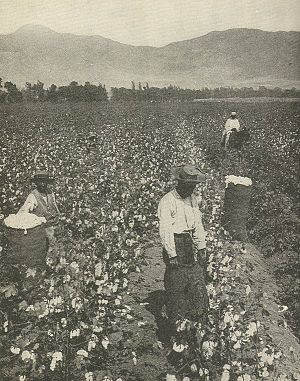 Cotton farming on a Southern plantation in 1921

Corn, turkeys, tomatoes, potatoes, peanuts, and sunflower seeds constitute some of the major holdovers from the agricultural endowment of the Americas.

European agricultural practices greatly affected the New England landscape. Colonists brought livestock over from Europe which caused many changes to the land. Grazing animals required a lot of land and food and the act of grazing itself destroyed native grasses, which were being replaced by European species. New species of weeds were introduced and began to thrive as they were capable of withstanding the grazing of animals, whereas native species could not.[4]

The practices associated with keeping livestock also contributed to the deterioration of the forests and fields. Colonists would cut down the trees and then allow their cattle and livestock to graze freely in the forest and never plant more trees. The animals trampled and tore up the ground so much as to cause long-term destruction and damage.[4]

Soil exhaustion was a huge problem in New England agriculture. Farming with oxen did allow the colonist to farm more land but it increased erosion and decreased soil fertility. This was due to deeper plow cuts in the soil that allowed the soil more contact with oxygen causing nutrient depletion. In grazing fields, the large number of cattle in the New England, the soil was being compacted by the cattle and this did not give the soil enough oxygen to sustain life.[4]

In the United States, farms spread from the colonies westward along with the settlers. In cooler regions, wheat was often the crop of choice when lands were newly settled, leading to a "wheat frontier" that moved westward over the course of years. Also very common in the antebellum Midwest was farming corn while raising hogs, complementing each other especially since it was difficult to get grain to market before the canals and railroads. After the "wheat frontier" had passed through an area, more diversified farms including dairy cattle generally took its place. Warmer regions saw plantings of cotton and herds of beef cattle. In the early colonial south, raising tobacco and cotton was common, especially through the use of slave labor until the Civil War. In the northeast, slaves were used in agriculture until the early 19th century.[citation needed] In the Midwest, slavery was prohibited by the Freedom Ordinance of 1787.

The introduction and broad adoption of scientific agriculture since the mid-19th century contributed to economic growth in the United States. This development was facilitated by the Morrill Act and the Hatch Act of 1887 which established in each state a land-grant university (with a mission to teach and study agriculture) and a federally funded system of agricultural experiment stations and cooperative extension networks which place extension agents in each state.

Significant areas of farmland were abandoned during the Great Depression and incorporated into nascent national forests. Later, "Sodbuster" and "Swampbuster" restrictions written into federal farm programs starting in the 1970s reversed a decades-long trend of habitat destruction that began in 1942 when farmers were encouraged to plant all possible land in support of the war effort. In the United States, federal programs administered through local Soil and Water Conservation Districts provide technical assistance and partial funding to farmers who wish to implement management practices to conserve soil and limit erosion and floods. 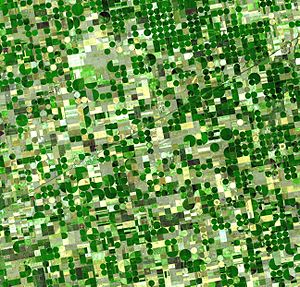 Satellite image of circular crop fields characteristic of center pivot irrigation in Kansas (June 2001). Healthy, growing crops are green. Corn would be growing into leafy stalks by late June. Sorghum, which resembles corn, grows more slowly and would be much smaller and therefore, possibly paler. Wheat is a brilliant gold as harvest occurs in June. Fields of brown have been recently harvested and plowed under or lie fallow for the year.

Tonnes of United States agriculture production, as reported by the FAO in 2003 and 2013 (ranked roughly in order of value):[6]

The only other crops to ever appear in the top 20 in the last 40 years were, commonly: tobacco, barley, and oats, and, rarely: peanuts, almonds, and sunflower seeds. Alfalfa and hay would both be in the top ten in 2003 if they were tracked by FAO.

Note alfalfa and hay are not tracked by the FAO and the production of tobacco in the United States has fallen 60% between 1997 and 2003.

U.S. agriculture has a high yield relative to other countries. As of 2004:[9]

File:US cattle density 2007.jpg
Density of cattle and calves by county in 2007.

The major livestock industries in the United States:

Farm type is based on which commodities are the majority crops grown on a farm. Nine common types include:[13][14][15] 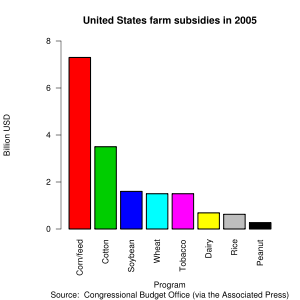 Agriculture in the United States is primarily governed by periodically renewed U.S. farm bills. Governance is both a federal and a local responsibility with the United States Department of Agriculture being the federal department responsible. Government aid includes research into crop types and regional suitability as well as many kinds of subsidies, some price supports and loan programs. U.S. farmers are not subject to production quotas and some laws are different for farms compared to other workplaces.

A large part of the U.S. farm workforce is made up of migrant and seasonal workers, many of them recent immigrants from Latin America or aliens working under work permits. Additional laws apply to these workers and their housing which is often provided by the farmer.

In 2012, there were 3.2 million farmers,[19] ranchers and other agricultural managers and an estimated 757,900 agricultural workers were legally employed in the US. Animal breeders accounted for 11,500 of those workers with the rest categorized as miscellaneous agricultural workers. The median pay was $9.12 per hour or $18,970 per year.[20] In 2009, about 519,000 people under age 20 worked on farms owned by their family. In addition to the youth who lived on family farms, an additional 230,000 youth were employed in agriculture.[21] In 2004, women made up approximately 24% of farmers; that year, there were 580,000 women employed in agriculture, forestry, and fishing.[22]

Agriculture ranks among the most hazardous industries due to the use of chemicals and risk of injury.[23][24] Farmers are at high risk for fatal and nonfatal injuries (general traumatic injury and musculoskeletal injury), work-related lung diseases, noise-induced hearing loss, skin diseases, chemical-related illnesses, and certain cancers associated with chemical use and prolonged sun exposure.[24][25][26] In an average year, 516 workers die doing farm work in the U.S. (1992–2005). Every day, about 243 agricultural workers suffer lost-work-time injuries, and about 5% of these result in permanent impairment.[27] Tractor overturns are the leading cause of agriculture-related fatal injuries, and account for over 90 deaths every year. The National Institute of Occupational Safety and Health recommends the use of roll over protection structures on tractors to reduce the risk of overturn-related fatal injuries.[27]

Farming is one of the few industries in which families (who often share the work and live on the premises) are also at risk for injuries, illness, and death. Agriculture is the most dangerous industry for young workers, accounting for 42% of all work-related fatalities of young workers in the U.S. between 1992 and 2000. In 2011, 108 youth, less than 20 years of age, died from farm-related injuries.[21] Unlike other industries, half the young victims in agriculture were under age 15.[28] For young agricultural workers aged 15–17, the risk of fatal injury is four times the risk for young workers in other workplaces[29] Agricultural work exposes young workers to safety hazards such as machinery, confined spaces, work at elevations, and work around livestock. The most common causes of fatal farm-related youth injuries involve machinery, motor vehicles, or drowning. Together these three causes comprise more than half of all fatal injuries to youth on U.S. farms.[30] Women in agriculture (including the related industries of forestry and fishing) numbered 556,000 in 2011.[24]

Agriculture in the US makes up approximately 75% of the country's pesticide use. Agricultural workers are at high risk for being exposed to dangerous levels of pesticides, whether or not they are directly working with the chemicals.[26]

Some US research centers are focused on the topic of health and safety in agricultural practices. These centers not only conduct research on the subject of occupational disease and injury prevention, but also promote agricultural health and safety through educational outreach programs. Most of these groups are funded by the National Institute for Occupational Safety and Health, the US Department of Agriculture, or other state agencies.[31] Centers include:

Women who work in agriculture face different occupational hazards than men. Women in agriculture are poisoned by pesticides at twice the rate of their male counterparts. Exposure to pesticides can also affect fertility; women exposed to pesticides take longer to conceive (men are unaffected). Women are also at risk for bronchitis from exposure to grain, pesticides, and dust.[26]