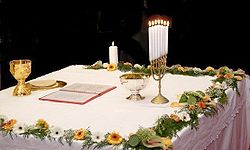 An altar cloth is used by various religious groups to cover an altar. It may be used as a sign of respect towards the holiness of the altar, as in the Catholic Church. Because many altars are made of wood and are often ornate and unique, cloth may then be used to protect the altar surface. In other cases, the cloth serves to beautify a rather mundane construction underneath. 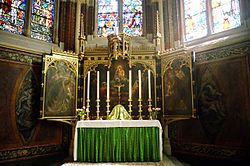 The High Altar at St. John the Divine, Kennington, London.

Special cloths (not necessarily made of linen) cover the altar in many Christian churches during services and celebrations, and are often left on the altar when it is not in use. At the turn of the 20th century the Roman Catholic Church considered only linen or hemp to be acceptable as material for altar cloths, although in earlier centuries silk or cloth of gold or silver were used.[1] The Anglican Communion had similar rules in that period.[2]

At that time, the Roman Rite required the use of three altar cloths, to which a cere cloth, not classified as an altar cloth, was generally added. This was a piece of heavy linen treated with wax (cera, from which "cere" is derived, is the Latin word for "wax") to protect the altar linens from the dampness of a stone altar, and also to prevent the altar from being stained by any wine that may be spilled. It was exactly the same size as the mensa (the flat rectangular top of the altar).

Above this were placed two linen cloths. Like the cere cloth, they were made of heavy linen exactly the same size as the mensa of the altar. They acted as a cushion and, with the cere cloth, prevented the altar from being dented by heavy vases or communion vessels placed on top. Instead of two cloths, a single long cloth folded so that each half covered the whole mensa was acceptable.

The topmost cloth was the fair linen, a long white linen cloth laid over the two linen cloths. It had the same depth as the mensa of the altar, but was longer, generally hanging over the edges to within a few inches of the floor or, according to some authorities, it should hang 18 inches over the ends of the mensa. On an altar without antependium and consisting of the mensa resting on columns or made after the fashion of a tomb the topmost linen did not have to overhang the edges at the sides. It could be trimmed with lace on the ends and could be ornamented with figures of chalices, hosts and the like. Five small crosses might be embroidered on the fair linen - one to fall at each corner of the mensa, and one in the middle of the front edge. These symbolised the five wounds of Jesus. The fair linen should be left on the altar at all times. When removed for replacement, it should be rolled, not folded. It symbolized the shroud in which Jesus was wrapped for burial.

The present rules of the Roman Rite are much less detailed, stating only:

Out of reverence for the celebration of the memorial of the Lord and for the banquet in which the Body and Blood of the Lord are offered, there should be, on an altar where this is celebrated, at least one cloth, white in colour, whose shape, size, and decoration are in keeping with the altar's structure.[3] 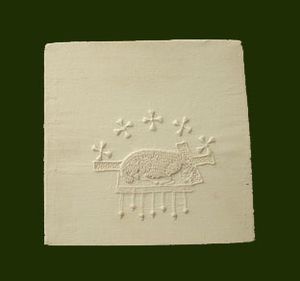 A pall, embroidered with the Agnus Dei
File:Kelkvelum.jpg
A chalice veil laid over the holy vessels
File:Bursa used in church.jpg
A burse

There are also special linens which pertain to the Eucharist:

In the Roman Catholic Church and the Anglican Communion all of the linen cloths are white, including their decoration. Other more decorative cloths sometimes used to decorate the front and back of the altar are:

Previously, all Christian Churches used altar cloths. However, today some use no cloths on the altar or only the fair linen. Several variants of the above cloths and linens are also in use. Some Churches use a frontlet and no frontal, especially where the altar is richly decorated and a frontal would hide it. Where only a frontlet is used, in many cases the frontlet is permanently attached to the linen cloth, and so the linen cloth must be replaced with the frontlet. Many Churches dispense with the cere cloth and the coverlet.

Many churches of the Anglican Communion follow the tradition of the Latin Church in preparing the altar for the Eucharist. There are varying practices in the Episcopal Church; some do not use the elaborate altar dressing previously laid down for the Roman Catholic Church and usually use only a white fair linen cloth to cover the top of the altar. According to a glossary found on an Episcopal parish's website, the altar cloth they use "... covers the top of the altar and hangs down the sides almost to the floor." [9] Lutherans also use a single fair linen on their altar, though many use the coloured frontlet or frontal as well.[10][11] 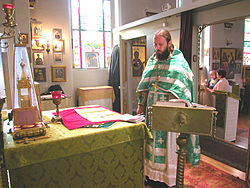 A Russian Orthodox priest celebrating Divine Liturgy. On the Holy Table (altar) is a green indítia, and the Antimens (gold) with its eileton (red) has been opened.

In the Eastern Orthodox and Eastern Catholic Churches of Byzantine Rite, the altar is referred to as the Holy Table or Throne (Church Slavonic: Prestol). Although there are variations, normally it will be completely covered on all four sides with three clothes.

The Antimension (Church Slavonic: Antimens) is similar to the Western corporal, though it serves a function similar to an altar stone. It is a piece of silk or linen which has an icon of the Deposition from the Cross depicted on it, and relics of a martyr sewn into it. Unlike the Western corporal, the Antimension is not removed from the Holy Table after the Eucharist is over, but is kept in the center of the Holy Table, covered by the Gospel Book.

The Antimension is wrapped in a slightly larger cloth, called the Eiliton to protect it. The Eiliton is often red. 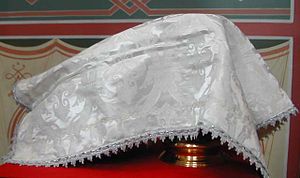 The diskos and chalice covered by the Aër at the conclusion of the Proskomedie.

There are usually one or two communion cloths (houselling cloths) kept on the Holy Table. These are made of cotton or some similar material that can be easily washed and are often dyed red. They are used like the Western purificator to wipe the lips of the communicants and to dry the chalice and other sacred vessels after the ablutions.

A dust cover is frequently used, either to cover only the Gospel Book or the entire top of the Holy Table. This cover is not, strictly speaking, a liturgical object, but is purely utilitarian. Because it will rest upon the Holy Table, it is usually made of a fair material, but not normally as rich as the inditia.

Towels are used to dry the hands after lavabo, though their design and use are not as fixed as formerly in the West. When a bishop washes his hands, a larger and more ornate towel is used to dry his hands.

The Jews traditionally used colour, "And of the blue, and purple, and scarlet, they made cloths of service..." which were to be used by the priests inside the tabernacle. Since all of the other items made from fabric for use in the tabernacle were made from fine linen it is reasonable to assume that the cloths of service were also made from linen.(Exodus 39:1) Unfortunately, Exodus does not give the dimensions of the cloths, nor does it indicate how or when the cloths were to be used.

The practice of using altar cloths disappeared when the Temple in Jerusalem was destroyed in AD 70. The focus of worship turned towards the synagogue and the need for an altar disappeared. There is a table where the Torah scrolls are laid for reading, called a bimah, and another lower table called an amud, that is, a lectern. The lectern is covered with an embroidered cloth covering the area on which the Torah scroll will rest during the parashah (lection—see Torah reading). The Ark in the synagogue is covered with a cloth called the parokhet to recall the veil which covered the entrance to the Holy of Holies.