Peter John Collins (6 November 1931 – 3 August 1958) was a British racing driver from England. Debuting on 18 May 1952, he participated in 35 World Championship Grands Prix, winning three races with nine podiums, and scored a total of 47 championship points.

Collins was born on 6 November 1931. He grew up in Mustow Green, Kidderminster, Worcestershire, England. The son of a motor garage owner and haulage merchant, Collins became interested in motor vehicles at a young age. He was expelled from school at 16 due to spending time at a local fairground during school hours. He became an apprentice in his father's garage and began competing in local trials races.

In common with many British drivers of the time, Collins began racing in the 500 cc category (adopted as Formula 3 at the end of 1950), when his parents bought him a Cooper 500 from the fledgling Cooper Car Company. These small vehicles, powered by Norton motorcycle engines, were also the proving ground of many of Collins' F1 contemporaries including Stirling Moss. 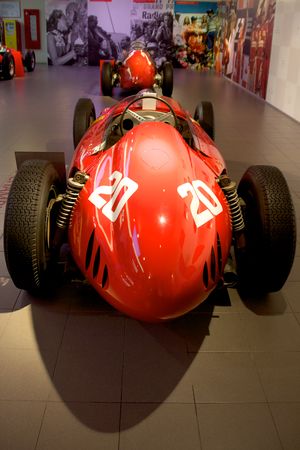 Tested in October 1957 by Peter Collins at the Modena Autodrome, this car's engine, which was derived from the Dino V6, offered a nicely balance between a 4-cylinder and the 8-cylinder designed by Vittorio Jano. Soon-to-be world champion Mike Hawthorn won the French Grand Prix in the 246 F1 while Peter Collins delivered victory in the British Grand Prix.

Collins joined the Aston Martin sports car team in 1952, and scored a sensational victory at the 1952 Goodwood Nine Hours race. The following year, he took the Aston Martin DB3S he shared with Pat Griffith to victory in the Tourist Trophy at Dundrod.

Collins got his Formula One break in 1952, driving for the HWM team, replacing Stirling Moss. Results did not come the team's way, and Collins left after the 1953 season. Following spells driving for Vanwall and Maserati, together with a brief outing in a BRM which ended with a crash in qualifying, Collins signed with Ferrari for the 1956 F1 season.

Collins' 1956 season with Ferrari proved to be a turning point, with a solid second-place finish behind Moss at the Monaco Grand Prix, and wins at the Belgian and French Grands Prix. Indeed, Collins was on the verge of becoming Britain's first F1 World Champion when he handed his Lancia-Ferrari D50 over to team leader Juan Manuel Fangio after the latter suffered a steering-arm failure toward the end of the Italian Grand Prix at Monza. Collins eventually finished second, but the advantage handed to Moss, and the extra points gained by Fangio's finish, demoted Collins to third place in the championship. Collins' selfless act gained him respect from Enzo Ferrari and high praise from Fangio: "I was moved almost to tears by the gesture... Peter was one of the finest and greatest gentlemen I ever met in my racing career."[1]

In 1956, Collins moved to Monaco to avoid compulsory military service in the British Army and thus continue his racing career.[2]

In January 1957 Collins married American actress Louise King, daughter of the executive assistant to UN Secretary General Dag Hammarskjold, [3] and the couple took up residence on a yacht in Monaco harbour. In the same year, Collins was joined at Ferrari by Mike Hawthorn. The two became very close friends, even arranging to split their winnings between each other, and together engaged in a fierce rivalry with fellow Ferrari driver Luigi Musso.[4] However, despite a third-place finish at the Nürburgring, Ferrari were disadvantaged for much of the season as the 801 model (an evolution of the 1954 Lancia D50) was overweight and underpowered.

1958 saw the introduction of the new, improved Ferrari Dino 246 and results started to improve for Scuderia Ferrari. Although achieving few results in the first half of the season, Collins improved and won the non-championship International Trophy. However Enzo Ferrari felt Collins was distracted by his supposed playboy lifestyle. The Monaco yacht where he lived was considered a perpetual party by Ferrari who thought Collins was distracted and no longer focused on driving and developing sports cars.

Collins was sacked by Ferrari after deliberately damaging the clutch in his car, which he shared with Mike Hawthorn during the Le Mans 24 hours rather than race in a rainstorm, and was found drinking in a pub in England before the end of the race.

Ferrari relented and allowed Collins to drive an F2 car until the end of the season. At Reims, Hawthorn refused to start unless Collins was allowed to start in a F1 car. He did, and finished fifth. Ferrari immediately sacked Collins again. Hawthorn responded by flying to Italy and storming the Ferrari headquarters in Modena. Having smashed down locked doors, Mike Hawthorn told Enzo Ferrari he would not drive for him again unless Collins was given his Formula One seat again. Ferrari relented.

At Silverstone during the British Grand Prix, Collins achieved perhaps his greatest drive. Under team orders and desiring to help his friend Hawthorn win the Championship, Collins led from the start, running flat out in an effort to beat the Vanwall of Moss. Although in an inferior car to the main contenders, by driving on the limit for 45 laps Collins gradually pulled away from Moss until his Vanwall expired and Collins won.[5]

The Ferrari team management decided not to slow Collins down and flag Hawthorn through to the win after Collins' great drive. Moss' future patron, Rob Walker, told Collins after the race, that he found Collins' drive frightening and he should never drive like that again. It was his third and final career victory. That season he also took a third place at Monaco.

During the 1958 German Grand Prix at the Nürburgring, whilst chasing Tony Brooks' Vanwall, Collins had a fatal crash. After pushing hard to keep pace, Collins went into the Pflanzgarten section of the circuit too quickly causing his Ferrari to run wide, encountering a ditch. Collins lost control, flipped into the air and landed upside down. In Tony Brooks' autobiography he recalled that he drove harder in the 1958 German Grand Prix, in the duel with Collins and Hawthorn, than ever in his life, but similar to previously when duelling with Fangio, the Ferrari pair were passing and repassing only on the safer North and South curves.[6] When the car somersaulted, Collins was thrown and he struck a tree, sustaining critical head injuries. Despite hospital treatment Collins died later in the afternoon. His death was almost identical to the fate which his Ferrari team mate Luigi Musso suffered. Team mate Mike Hawthorn was so disturbed by Collins' death that he retired from racing immediately after winning the 1958 Driver's Championship. Hawthorn himself died during the following year after an automobile accident on the A3 bypass near Guildford, Surrey, England.

Many years after the death of Peter Collins, Fiamma Breschi, Luigi Musso's girlfriend at the time of his death, revealed in a television documentary entitled The Secret Life of Enzo Ferrari the rivalry between team-mates Collins, Hawthorn and Musso. Breschi recalled that the antagonism between Musso and the two English drivers encouraged all three to take risks:

"The Englishmen (Hawthorn and Collins) had an agreement," she says. "Whichever of them won, they would share the winnings equally. It was the two of them against Luigi, who was not part of the agreement. Strength comes in numbers, and they were united against him. This antagonism was actually favourable rather than damaging to Ferrari. The faster the drivers went, the more likely it was that a Ferrari would win."[4]