The Kingdom of France was organized into provinces until March 4, 1790, when the establishment of the department (French: département) system superseded provinces. The provinces of France were roughly equivalent to the historic counties of England. They came into their final form over the course of many hundreds of years, as many dozens of semi-independent fiefs and former independent countries came to be incorporated into the French royal domain. Because of the haphazard manner in which the provinces evolved, each had its own sets of feudal traditions, laws, taxation systems, courts, etc., and the system represented an impediment to effective administration of the entire country from Paris. During the early years of the French Revolution, in an attempt to centralize the administration of the whole country, and to remove the influence of the French nobility over the country, the entirety of the province system was abolished and replaced by the system of departments in use today.

In some cases, several modern regions or departments share names with the historic provinces, and their borders may cover roughly the same territory.

The list below shows the major provinces of France at the time of their dissolution during the French Revolution. Capital cities are shown in parentheses. Bold indicates a city that was also the seat of a judicial and quasi-legislative body called either a parlement (not to be confused with a parliament) or a conseil souverain (sovereign council). In some cases, this body met in a different city than the capital. 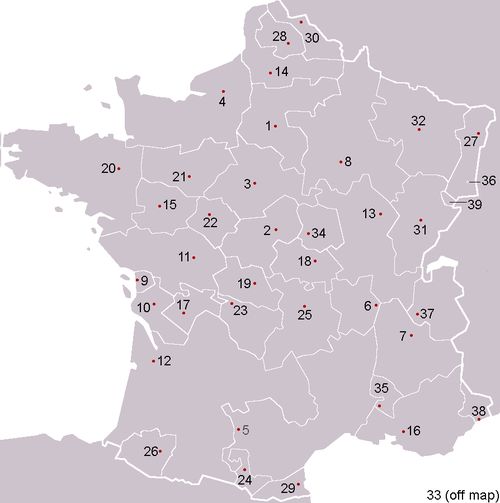 Provinces of France in 1789 relative to the modern borders of France
Note: The Comtat Venaissin (annexed 1791), Mulhouse (annexed 1798), Montbéliard (annexed 1816), Savoy and Nice (annexed 1860), and small portions of other provinces were not part of the Kingdom of France. 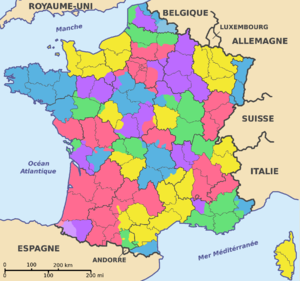 Areas that were not parts of the Kingdom of France, though they are currently parts of Metropolitan France

Coat of Arms of the Provinces of France