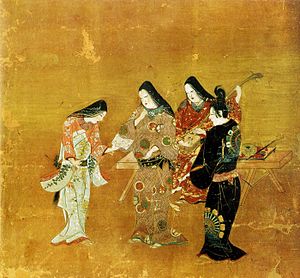 Senhime or Lady Sen (千姫?) (May 26,[1] 1597 – March 11,[2] 1666) was the eldest daughter of the shogun Tokugawa Hidetada and his wife Oeyo. She was born during the Warring-States period of Japanese history. Her paternal grandfather was the founder of the Tokugawa shogunate, Tokugawa Ieyasu; her maternal grandfather was Azai Nagamasa; her grandmother was Oichi, whose brother was Oda Nobunaga. When she was six or seven, her grandfather married her off to Toyotomi Hideyori, who was the son of Toyotomi Hideyoshi.

In 1603, when Senhime was seven years old, she married the successor to the Toyotomi clan, Toyotomi Hideyori and lived with him in Osaka Castle along with his mother, Lady Yodo, who was a sister of Oeyo. Little is known about their life together, but it didn't last long, as her grandfather, Ieyasu, besieged the castle in 1615, when she was just nineteen. When Osaka castle fell, Hideyori was forced to commit suicide along with his mother and his child by Senhime. Senhime was luckier and had been rescued from the castle before it fell.

In 1616, Ieyasu remarried Senhime to Honda Tadatoki, a grandson of Honda Tadakatsu, and in few years she moved to Himeji.

A famous legend tells that a certain Sakazaki Naomori planned to capture Senhime just before her remarriage, wishing to marry her himself. However his plan was revealed and Naomori was either killed or forced to commit suicide. It was long believed that Naomori was the one who saved Senhime out from the Osaka Castle, believing the words of Tokugawa Ieyasu that he would give Senhime to whoever rescued her, though recently this has been doubted. Stories tell that Senhime refused to marry Naomori, whose face was ill-favored because of the burn he got when he saved her, and rather preferred handsome Tadatoki.

Senhime and Tadatoki had an amicable marriage and had two children together: a daughter, Katsuhime (勝姫?), and a son, Kōchiyo (幸千代?). However tragedy struck when her son died at the age of three, and five years later in 1626, her husband died of tuberculosis. His mother and Oeyo (then known as Sūgen'in) died in the same year. As was the tradition for a widow at that time, Senhime cut her hair short and became a Buddhist nun, taking the name Tenjuin (天樹院?), moved back to Edo and spent the rest of her life there. 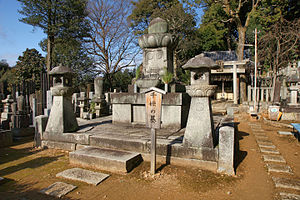 The dramatic life of Senhime produced many legends. Some legends talk about her tenderness, such as how she saved a daughter between her husband Hideyori and another wife of him at the Siege of Osaka. Some other tell her lecherousness during her later days at Edo. Today, Senhime figures prominently in jidaigeki and taiga dorama (period dramas) in Japan.

Senhime is also a beloved figure in Himeji. Shortly after her marriage to Honda Tadatoki, they moved to Himeji Castle, a present-day world heritage site whose west wing was mostly constructed at that time. Most of the west wing is lost now, but a tower called keshō yagura (Dressing Tower) remains, where it is believed that she actually groomed herself.

Senhime appeared in the concluding storyline of the semi-fictional video game Kessen. In the final cutscene she laments to Ieyasu about the tragedy of war and the death of Hideyori, Ieyasu comforts her and replies that the people of Japan will once again live in peace and praises Hideyori for his duty as a samurai by committing seppuku.

Senhime also appeared in a 1962 movie Senhime to Hideyori, starring Hibari Misora as Senhime. The film begins from the siege and fall of Osaka castle and tells the fictionalized story of Senhime's later years after the death of Hideyori till her final confinement to the Buddhist temple. A more historical film about Senhime and the siege of Osaka Castle appeared in the mid-1950s entitled Princess Senhime, with Kyo Machiko in the title role.