From Infogalactic: the planetary knowledge core
Jump to: navigation, search
"Ganryu" redirects here. For the sumo wrestler in the Tekken video game series, see List of characters in the Tekken series § Ganryu.
In this Japanese name, the family name is Sasaki.

Sasaki Kojirō (佐々木 小次郎?, also known as Sasaki Ganryū) (1585? – April 13, 1612), often anglicised to Kojirō Sasaki, was a prominent Japanese swordsman widely considered a master of his craft, born in Fukui Prefecture. He lived during the Sengoku and early Edo periods and is most remembered for his death while battling Miyamoto Musashi in 1612.

Sasaki went by the fighting name of Ganryū (巌流?, lit. "Large Rock style"), which was also the name of the kenjutsu school he had founded. It is said that Sasaki studied the Chūjō-ryu of sword fighting from either Kanemaki Jisai or Toda Seigen. Toda Seigen was a master of the kodachi. If Sasaki had indeed learned Chūjō-ryu from Seigen, he would have been his master's sparring partner. Due to his master's use of the kodachi, Sasaki used a nodachi, or a long katana, against him, therefore eventually excelling in its use. It was after defeating his master's younger brother that he left and founded the Ganryū. The first reliable account of his life states that in 1610, because of the fame of his school and his many successful duels, including once when he fended off three opponents with a tessen, Sasaki was honored by Lord Hosokawa Tadaoki as the chief weapons master of the Hosokawa fief north of Kyūshū. Sasaki later became skilled in wielding a nodachi, and used one he called "Monohoshizao" ("The Laundry-Drying Pole") as his main weapon.

Sasaki Kojiro (right) engages Miyamoto Musashi on the shores of Ganryū Island. Note that in this rendering, Musashi is using two bokken.

Sasaki Kojirō was a long-time rival of Miyamoto Musashi, and is considered the most challenging opponent Miyamoto ever faced. There are a number of accounts of the duel, varying in most details except the essentials, such as Sasaki's defeat. The age of Sasaki is especially uncertain – the Nitenki says that during his childhood, he

…received the instruction of Toda Seigen, a master of the school of the short sword, and having been the partner of his master, he excelled him in the wielding of the long sword. After having defeated his master's younger brother he left him to travel in various provinces. There he founded his own school, which was called Ganryu.

The Nitenki’s account initially seems trustworthy, until it goes on to give the age of Sasaki at the time of the duel as 18 years old; it is known that two years earlier he had been a head weapons master for a fief – but then that would imply he had reached such a position at the age of 16, which is extremely improbable. A further complication is that Toda Seigen died in the 1590s. This unreliability of the sources means Sasaki's age could have varied anywhere from his 20s to as late as his 50s. Even worse, a number of scholars contend that identifying Seigen as Sasaki's teacher is a mistake, and that he was actually trained by a student of Seigen's, Kanemaki Jisai.

Apparently, the young Miyamoto, at the time, around 29 years old, heard of Sasaki's fame and asked Lord Hosokawa Tadaoki, through the intermediary of Nagaoka Sado Okinaga, a principal vassal of Hosokawa, to arrange a duel. Hosokawa assented, and set the time and place as 13 April 1612, on the comparatively remote island of Ganryujima of Funashima, the strait between Honshū and Kyūshū. The match was probably set in such a remote place because by this time Sasaki had acquired many students and disciples, and were Sasaki to have lost, they would probably have attempted to kill Miyamoto.

According to the legend, Miyamoto arrived more than three hours late, and goaded Sasaki by taunting him. When Sasaki attacked, his blow came as close as to sever Miyamoto's chonmage. He came close to victory several times until, supposedly blinded by the sunset behind Miyamoto, Miyamoto struck him on the skull with his oversized bokken, or wooden sword, which was 110 centimeters long. Miyamoto supposedly fashioned the long bokken, a type called a suburitō due to its above-average length, by shaving down the spare oar of the boat in which he arrived at the duel with his wakizashi. Miyamoto had been late for the duel on purpose in order to psychologically unnerve his opponent, a tactic he used on previous occasions, such as during his series of duels with the Yoshioka swordsmen.

Another version of the legend recounts that when Miyamoto finally arrived, Sasaki shouted insults at him, but Miyamoto just smiled. Angered even further, Sasaki leapt into combat, blinded by rage. Sasaki attempted his famous "swallow's blade" or "swallow cut," but Miyamoto's oversized bokken hit Sasaki first, causing him to fall down; before Sasaki could finish his swallow cut, Miyamoto smashed Sasaki's left rib, puncturing his lungs and killing him. Miyamoto then hastily retreated to his boat and sailed away. This was Miyamoto's last fatal duel.

Among other things, this conventional account, drawn from the Nitenki, Kensetsu, and Yoshida Seiken's account, has some problems. Kenji Tokitsu discusses a number of obscurities and counterintuitive claims that have been identified in the account by him and previous scholars. Would Miyamoto only prepare his bokuto while going to the duel site? Could he even have prepared it in time, working the hard wood with his wakizashi? Would that work not have tired him as well? Further, why was the island then renamed after Sasaki, and not Miyamoto? Other texts completely omit the "late arrival" portion of the story, or change the sequence of actions altogether. Harada Mukashi and a few other scholars believe that Sasaki was actually assassinated by Miyamoto and his students – the Sasaki clan apparently was a political obstacle to Lord Hosokawa, and defeating Sasaki would be a political setback to his religious and political foes.

The debate still rages today as to whether or not Miyamoto cheated in order to win that fateful duel or merely used the environment to his advantage. Another theory is that Miyamoto timed the hour of his arrival to match the turning of the tide. He expected to be pursued by Sasaki's supporters in the event of a victory. The tide carried him to the island then it turned by the time the fight ended. Miyamoto immediately jumped back in his boat and his flight was thus helped by the tide.

Sasaki's favored weapon during combat was a straight-edged nodachi with a blade-length of over 90 cm (2 feet, 11.5 inches). As a comparison, the average blade-length of the regular katana are usually 70 cm (2 feet, 3 inches) but rarely longer. It was called the "Monohoshi Zao" (Clothes/Laundry-Drying Pole, 物干し竿, often translated into English as "The Drying Pole"). Despite the sword's length and weight, Sasaki's strikes with the weapon were unusually quick and precise. 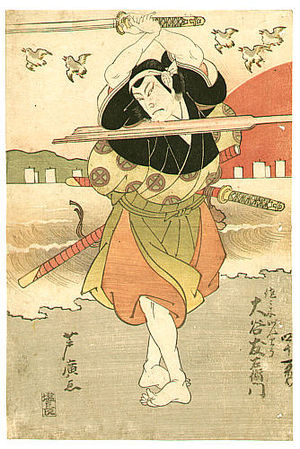 His favorite technique was both respected and feared throughout feudal Japan. It was called the "Turning Swallow Cut" or "Tsubame Gaeshi" (燕返し lit. "Swallow Reversal / Return"), and was so named because it mimicked the motion of a swallow's tail during flight as observed at Kintaibashi Bridge in Iwakuni. This cut was reputedly so quick and precise that it could strike down a bird in mid-flight. There are no direct descriptions of the technique, but it was compared to two other techniques current at the time: the Ittō-ryū's Kinshi Cho Ohken and the Ganryū Kosetsu To; respectively the two involved fierce and swift cuts downward and then immediately upwards. Hence, the "Turning Swallow Cut" has been reconstructed as a technique involving striking downward from above and then instantly striking again in an upward motion from below. The strike's second phase could be from below toward the rear and then upward at an angle, like an eagle climbing again after swooping down on its prey. Sasaki created this technique around 1605.

Sasaki Kojiro has appeared in many forms in pop culture in Japan. He features in a lot of the films about the life of Miyamoto Musashi, most prominently in Samurai III: Duel at Ganryu Island.

In the manga Vagabond, Sasaki Kojiro is portrayed as a deaf man raised by a retired samurai after he is found in the ocean clinging to a long sword.

He appears as a cultured and soft speaking psychopath with a white painted face in Samurai Warriors 2.

In the PlayStation 1 video game Brave Fencer Musashi, Sasaki appears as a result of a second "hero summoning" to save the princess of the Allucaneet Kingdom.

Sasaki Kojiro also appeared as the Heroic Spirit 'Assassin' in the visual novel Fate/Stay Night And In Fate/Stay Night: Unlimited Blade Works the anime he is assassin who is guarding the stairway of Ryuudou Temple, and fights Saber in the series.

His technique, the "Tsubame Gaeshi", resurfaced as a boxing move in the Hajime no Ippo TV special, Champion Road.

In the video game series Dark Souls, a possible reference to Sasaki's sword is the "Washing Pole", which is a very long Katana.