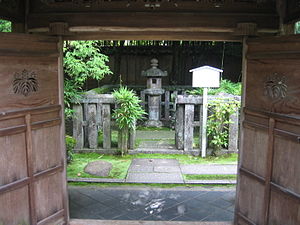 The grave of Hosokawa Gracia and Hosokawa Tadaoki, Kōtō-in, Daitoku-ji, Kyoto.
In this Japanese name, the family name is Hosokawa.

Hosokawa Tama (細川玉?), usually referred to as Hosokawa Garasha (細川ガラシャ?), (1563 – 25 August 1600) was a Japanese samurai woman.[1] She is known for being the daughter of Akechi Mitsuhide, the wife of Hosokawa Tadaoki, and a Christian convert.

She was named Tama at birth; Garasha, the name by which she is known in history, is based upon her Catholic baptismal name, Gracia.

She married Hosokawa Tadaoki at the age of sixteen; the couple had five or six children. In the Sixth Month of 1582, her father Akechi Mitsuhide betrayed and killed his lord, Oda Nobunaga, making the teenage Tama a traitor's daughter. Not wishing to divorce her, Tadaoki sent her to the hamlet of Midono in the mountains of the Tango Peninsula (now in Kyoto Prefecture), where she remained hidden until 1584. Tadaoki then took Tama to the Hosokawa mansion in Osaka, where she remained in confinement.

Tama's maid was from a Catholic family, and her husband repeated to her conversations with his Christian friend Takayama Ukon. In the spring of 1587 Tama managed to secretly visit the Osaka church; a few months later, when she heard that Toyotomi Hideyoshi had issued a proclamation against Christianity, she was determined to be baptized immediately. As she could not leave the house, she was baptized by her maid and received the Christian name "Gracia".

In 1595 Tadaoki's life was in danger because of his friendship with Toyotomi Hidetsugu, and he told Gracia that if he should die she must kill herself. When she wrote asking the priests about the plan, they informed her that suicide was a grave sin. However, the danger passed. 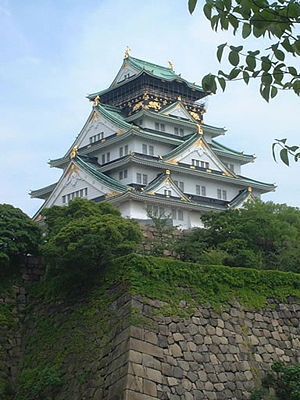 Reconstruction of Hideyoshi's Osaka Castle. (The Hosokawa mansion was just south of the castle.)

The death of Hideyoshi in 1598 left a power vacuum with two rival factions forming: Tokugawa Ieyasu in the east and Ishida Mitsunari in the west. When Ieyasu went to the east in 1600 leading a large army, including Tadaoki, his rival Ishida took over the impregnable castle in Osaka, the city where the families of many of Hideyoshi's generals resided. Ishida devised a plan to take the family members hostage, thus forcing the rival generals either to ally with him or at least not to attack him.

However, when Ishida attempted to take Gracia hostage, the family retainer Ogasawara Shōsai killed her[citation needed]; he and the rest of the household then committed seppuku and burned the mansion down. The outrage over her death was so great that Ishida was forced to abandon his plans. Most Japanese accounts state that it was Gracia's idea to order Ogasawara to kill her. But according to the Jesuit account written right after her death, whenever Tadaoki left the mansion he would tell his retainers that if his wife's honor were ever in danger, they should kill her and then themselves. They decided that this was such a situation; Gracia had anticipated her death and accepted it.

A Catholic priest had Gracia's remains gathered from the Hosokawa mansion and buried them in a cemetery in Sakai. Later, Tadaoki moved the remains to Suizen-ji, a temple in Osaka.

Gracia frequently appears as a character in Japanese historical fiction, both novels and drama. One website lists her as a character in over 40 stage dramas, movies, TV dramas, etc., from 1887 to 2006.[citation needed] She is also frequently referred to in popular writing or talks on the history of the period. A work that has been translated into English is Ayako Miura's novel, Hosokawa Garasha Fujin (English title: Lady Gracia: a Samurai Wife's Love, Strife and Faith), which follows history fairly closely.

James Clavell used Gracia as the model for the character of Mariko Buntarou in his novel Shōgun. Additionally Clavell gave the Japanese wife of Vasco Rodrigues (whose Japanese name was Nyan-nyan) the baptismal name Gracia. This book was later adapted for television as a miniseries. Elements of Mariko's story follow Gracia's quite closely, although the manner of her death is different (Mariko threatens to commits suicide if she is not allowed to leave Osaka Castle and is then embarrassingly and accidentally killed in a raid on her compound, thereby her death served the original purpose as her threatened suicide, enraging the other hostages) and the two characters do not fundamentally have anything in common.

Hosokawa Gracia (her name wasn't announced) is the one of the main antiheroine of the 1991 movie Shogun Mayeda.

The emblem (mon) of the Hosokawa clan