The Blockade of Africa began in 1807 when Britain outlawed the Atlantic slave trade, making it illegal for British ships to transport slaves. The Royal Navy immediately established a presence off Africa to enforce the ban, called the West Africa Squadron. Although the ban initially applied only to British ships, Britain negotiated treaties with other countries to give the Royal Navy the right to intercept and search their ships for slaves.[1] A notable exception was the United States, which refused such permission. An 1807 Act of Congress technically abolished the intercontinental slave trade in the United States but the ban was not widely enforced and many of the slave ships which escaped the blockade were destined for the southern United States. Some effort by the United States Navy was made to prevent the slave trade. This mostly consisted of patrols of the shores of the Americas and in the mid-Atlantic, the latter being largely unsuccessful due to the difficulty of intercepting ships in mid-ocean. As part of the Webster–Ashburton Treaty of 1842 it was agreed that both countries would work together on the abolition of the slave trade, which was deemed piracy, and to continue the blockade of Africa.

Following the Slave Trade Act of 1807 the Royal Navy set up the West Africa Squadron. Initially it consisted of two ships operating from Portsmouth. By 1818 the squadron had grown to six ships with a naval station established in 1819 at what is now Freetown and a supply base at Ascension Island, later moved to Cape Town in 1832.

The United States Constitution of 1787 had protected the importation of slaves for twenty years. The Pennsylvania Abolition Society held its first meeting at the temporary Capital, Philadelphia, Pennsylvania, in 1794. On 7 April 1798, the fifth Congress passed an Act that imposed a three-hundred dollars per slave penalty on persons convicted of performing the illegal importation of slaves. It was an indication of the type of behaviour and course of events soon to become commonplace in the Congress.

On Thursday, 12 December 1805, in the ninth Congress, Senator Stephen Roe Bradley of the State of Vermont gave notice that he should, on Monday next, move for leave to bring in a bill to prohibit the importation of certain persons therein described "into any port or place within the jurisdiction of the United States, from and after the first day of January," which will be "in the year of our Lord 1808." His words would be repeated many times by the legislators in the ninth Congress. The certain persons were described as being slaves on Monday, 16 December 1805.

Wary of offending the slaveholders to the least degree, the Senate amended the proposed Senatorial Act, then passed it to the House of Representatives whereat it became meticulously scrutinised and, figuratively, poked and prodded. Cautiously, ever mindful of not inciting the wrath of slaveholders, members of the House produced a bill which would explain the Senatorial Act. The two measures were bound together, with the House bill being called H R 77 and the Senate Act being called An Act to prohibit the importation of slaves into any port or place within the jurisdiction of the United States, from and after the first day of January, in the year of our Lord, 1808. The bound measure also regulated the coastwise slave trade. The bound measure was placed before President Thomas Jefferson on 2 March 1807 for his approbation.

The 1807 Act of Congress was modified and supplemented by the fifteenth Congress. The importation of slaves into the United States was called "piracy" by an Act of Congress that punctuated the era of good feeling in 1819. Any citizen of the United States found guilty of such "piracy" might be given the death penalty. The role of the Navy was expanded to include patrols off the coasts of Cuba and South America. The naval activities in the western Atlantic bore the name of The African Slave Trade Patrol of 1820–61. The blockade of Africa was still being performed in the eastern Atlantic at the same time. 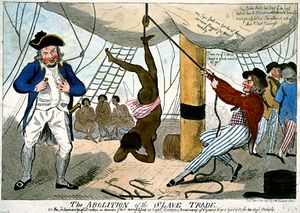 "The Abolition of the Slave Trade or the inhumanity of dealers in human flesh exemplified in Captn. Kimber's treatment of a young Negro girl of 15 for her virjen (sic) modesty." by Isaac Cruikshank, 1792. Shows an incident of an enslaved African girl whipped to death for refusing to dance naked on the deck of the slave ship; Captain John Kimber was denounced before the House of Commons by William Wilberforce over the alleged incident.
Main article: Africa Squadron

American naval officer Matthew Calbraith Perry was the executive officer aboard Cyane in 1819, which had escorted the Elizabeth, whose passengers included former slaves moving from the United States to Africa. In 1821, Perry commanded Shark in the Africa Squadron. Alligator under the command of Lieutenant Robert F. Stockton was also in the African Squadron in 1821 and captured several slavers. Lieutenant Stockton also convinced the local African chief to relinquish land around Cape Mesurado about which Liberia grew. Stockton became the commander of the US Navy's first screw-propelled steamer, the Princeton, in 1843.

On 26 and 27 November 1842, aboard the Somers in the African Squadron, commander Alexander Slidell Mackenzie ordered the arrest of three crewmen who were plotting to take control of the ship. The three crewmen were convicted; they were hanged on 1 December. This is the only occurrence of Maritime Mutiny at Law in the history of the United States Navy.[citation needed]

Commodore Perry was placed in command of the African Squadron in 1843. Ships which captured slavers while deployed with the African Squadron include Yorktown, Constellation, and the second Constellation, which captured Cora on 26 September 1860, with 705 Africans on board. The first San Jacinto captured the brig Storm King on 8 August 1860, off the mouth of the Congo River, with 616 Africans on board. In her final act, Constitution captured H.N. Gambrill in 1853.

The Navy attempted to intercept slave ships from 1808 (or 1809) to 1866. A small number of ships were intercepted; some of those ships were carrying Africans destined to be sold into slavery, while other suspected ships which had none on board were captured and escorted away from the coast of Africa. 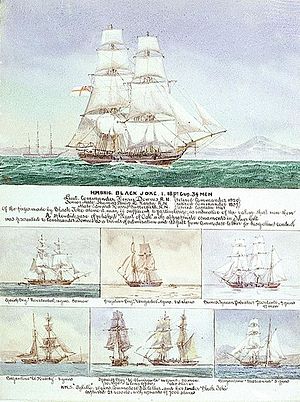 HMS Black Joke and the prizes she captured during the blockade.

The Louisiana Purchase in 1803 created a great demand for more slaves to work in the vast new area. Jean Lafitte was a pirate who brought many slaves to the United States and sold them through an organised system established at New Orleans that included many very respectable merchants from the vicinity. After he helped Andrew Jackson during the War of 1812, President James Madison issued a proclamation early in 1815 granting him and his men pardons for their misdeeds.

The United States Navy Africa Squadron, Brazil Squadron and the Home Squadron was assigned the task of intercepting the ships which were bringing kidnapped Africans across the Atlantic Ocean to the slave markets where black ivory found numerous customers. Since the War for Independence had been costly, the federal government constructed no new ships in from 1783 to 1795. The Navy Department was created on 30 April 1798, four years after President George Washington had communicated with Congress and expressed his alarm at the outrageous behaviour of Algeria. On 27 March 1794, following communication with President Washington, Congress authorised the purchase or construction of six frigates. These ships included the first Constellation, launched 7 September 1797 and Constitution, a ship that would be briefly employed in the African Squadron. Few new ships were built in the United States after 1801 until Guerriere was launched on 20 June 1814. It proved to be an effective warship in the War with the Barbary Pirates in 1815.

In its early efforts to enforce the law, the Navy used the ports of Charleston, SC and Savannah, GA from 1808 or 1809 to 1812 as home ports for several ships patrolling the Atlantic ocean in that area; however, USS Chesapeake sailed off the west coast of Africa early in 1813. The Navy created the African Squadron for the purpose of intercepting ships with "black ivory" on board; however, very few ships were operating together at any one time, which meant that the "blockade of Africa" was ineffective. More important tasks such as the War of 1812, the ongoing troubles with the Barbary Pirates, the extermination of the pirates in the West Indies from 1819 to 1827, the protection of American shipping in the Pacific Ocean off the coast of Peru in the 1830s, the War with Mexico in the 1840s, the voyages to Japan in the 1850s, and transporting of diplomats to other nations left little capability available for use in the African Squadron. Nevertheless, some noteworthy events involving ships while they were assigned to the African Squadron did occur.