From Infogalactic: the planetary knowledge core
Jump to: navigation, search
For other uses, see Brest.

Brest (French pronunciation: ​[bʁɛst]; Breton: [bʀest][1]) is a city in the Finistère département in Brittany in northwestern France. Located in a sheltered position not far from the western tip of the Breton peninsula, and the western extremity of metropolitan France, Brest is an important harbour and the second French military port after Toulon. The city is located on the western edge of continental Europe. With 142,722 inhabitants in a 2007 census, Brest is at the centre of Western Brittany's largest metropolitan area (with a population of 300,300 in total), ranking third behind only Nantes and Rennes in the whole of historic Brittany, and the 22nd most populous city in France; moreover, Brest provides services to the one million inhabitants of Western Brittany.[2] Although Brest is by far the largest city in Finistère, the préfecture (regional capital) of the department is the much smaller Quimper.

During the Middle Ages, the history of Brest was the history of its castle. Then Richelieu made it a military harbour. Brest grew around its arsenal, until the second part of the 20th century. Heavily damaged by the Allies' bombing raids during World War II, the city centre was completely rebuilt after the war. At the end of the 20th century and the beginning of the 21st century, the deindustrialization of the city was followed by the development of the service sector. Nowadays, Brest is an important university town with 23,000 students.[3] Besides a multidisciplinary university, the University of Western Brittany, Brest and its surrounding area possess several prestigious French elite schools such as École Navale (the French Naval Academy), Télécom Bretagne and the Superior National School of Advanced Techniques of Brittany (ENSTA Bretagne, formerly ENSIETA). Brest is also an important research centre, mainly focused on the sea, with among others the largest Ifremer (French Research Institute for Exploitation of the Sea) centre, le Cedre (Centre of Documentation, Research and Experimentation on Accidental Water Pollution) and the French Polar Institute.

Brest’s history has always been linked to the sea: the Académie de Marine (Naval Academy) was founded in 1752 in this city as well as the aircraft carrier Charles-de-Gaulle was built there. Every four years, Brest hosts the international festival of the sea, boats and sailors: it is a meeting of old riggings from around the world (Les Tonnerres de Brest). 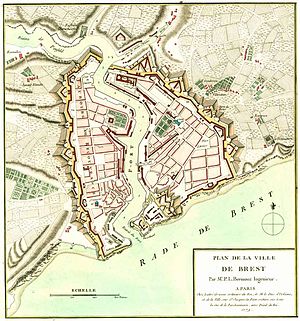 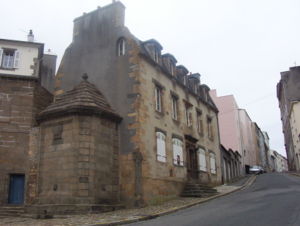 The Maison de la Fontaine in Recouvrance, one of the oldest houses of Brest (end of the 17th century, beginning of the 18th century).

Nothing definite is known of Brest before about 1240[dubious – discuss], when a count of Léon ceded it to John I, Duke of Brittany. In 1342, John IV, Duke of Brittany, surrendered Brest to the English, in whose possession it was to remain until 1397. The importance of Brest in medieval times was great enough to give rise to the saying, "He is not the Duke of Brittany who is not the Lord of Brest". With the marriage of Francis I of France to Claude, the daughter of Anne of Brittany, the definitive overlordship of Brest – together with the rest of the duchy – passed to the French crown.

The advantages of Brest's situation as a seaport town were first recognized by Cardinal Richelieu, who in 1631 constructed a harbor with wooden wharves. This soon became a base for the French Navy. Jean-Baptiste Colbert, finance minister under Louis XIV, rebuilt the wharves in masonry and otherwise improved the harbour. Fortifications by Vauban (1633–1707) followed in 1680–1688. These fortifications, and with them the naval importance of the town, were to continue to develop throughout the 18th century.

In 1694, an English squadron under Lord Berkeley, was soundly defeated in its attack on Brest.

In 1917, during the First World War, Brest was used as the disembarking port for many of the troops coming from the United States. Thousands of such men came through the port on their way to the front lines. The United States Navy established a naval air station on 13 February 1918 to operate seaplanes. The base closed shortly after the First Armistice at Compiègne.[4]

In the Second World War, the Germans maintained a large U-boat submarine base at Brest. In 1944, after the Allied invasion of Normandy, the city was almost totally destroyed during the Battle for Brest, with only a tiny number of buildings left standing. After the war, the West German government paid several billion Deutschmarks in reparations to the homeless and destitute civilians of Brest in compensation for the destruction of their city. Large parts of today's rebuilt city consist of utilitarian granite and concrete buildings. The French naval base now houses the Brest Naval Training Centre. A wartime German navy memorandum suggested that the town should perhaps serve as a German enclave after the war.[5]

In 1972, the French Navy opened its nuclear weapon-submarine (deterrence) base at Île Longue in the Rade de Brest (Brest roadstead). This continues to be an important base for the French nuclear-armed ballistic missile submarines.

The meaning of the coat of arms of Brest is half France (the three fleurs-de-lis of the former kingdom of France), half Brittany (semé d'hermine of Brittany). These arms were used for the first time in a register of deliberations of the city council dated the 15 July 1683.[6] 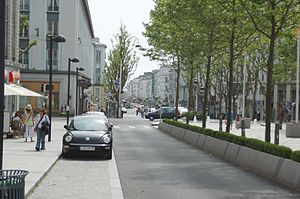 Brest is best known for its Pont de Recouvrance (Recouvrance Bridge, a massive drawbridge 64 m/210 ft high), the military arsenal and the rue de Siam (Siam Street). The castle and the Tanguy tower are the oldest monuments of Brest.

The Musée de la Tour Tanguy, in the Tanguy tower, houses a collection of dioramas that depict the city of Brest on the eve of World War II. The Musée national de la Marine de Brest, housed in the ancient castle, contains exhibits which outline Brest's maritime tradition, as well as an aquarium, the Océanopolis marine centre. The city also has a notable botanical garden specializing in endangered species, the Conservatoire botanique national de Brest, as well as the Jardin botanique de l'Hôpital d'Instruction des Armées Clermont-Tonnerre.

The city of Brest does not have much remaining historical architecture, apart from a few select monuments such as the castle and the Tanguy tower. This is due to heavy bombing by the Allies during World War II, in an attempt to destroy the submarine base the Germans had built in the harbour. In the 1950s, the town was hastily rebuilt using a large amount of concrete. In Recouvrance, the west bank of the town, there remains an authentic street of the 17th century, Saint-Malo Street.

A few kilometres out of town, there are more impressive landscapes, from sandy beaches to grottos to tall granite cliffs. Sunbathing, windsurfing, yachting and fishing are enjoyed in the area. Brest was an important warship-producing port during the Napoleonic wars. The naval port, which is in great part excavated in the rock, extends along both banks of the Penfeld river. 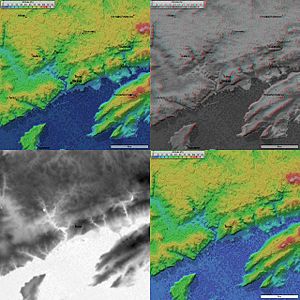 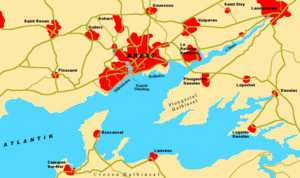 Brest and its surrounding area

Brest is located amidst a dramatic landscape near the entrance of the natural rade de Brest (Brest roadstead), at the west end of Brittany.

It is situated to the north of a magnificent landlocked bay, and occupies the slopes of two hills divided by the river Penfeld. The part of the town on the left bank is regarded as Brest proper, while the part on the right is known as Recouvrance. There are also extensive suburbs to the east of the town. The hillsides are in some places so steep that the ascent from the lower to the upper town has to be effected by flights of steps and the second or third storey of one house is often on a level with the ground storey of the next. 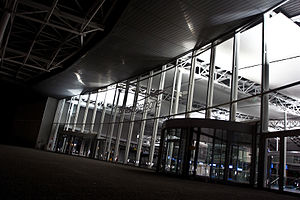 Brest Bretagne Airport, main airport of the region of Brittany

The harbour of Brest

The railway station of Brest, Gare de Brest, is linked to Rennes and Paris as well as services to Brittany. TGV trains to Paris take approximately four and a half hours to reach the capital.

Brest international airport, Brest Bretagne Airport, is mainly linked to Paris, London, Nice, Lyon, Dublin. The primarily operator is Air France (via its subsidiary HOP!). Brest international airport is the main airport of the region of Brittany in terms passager traffic with 45% of this traffic of the region, representing 919,404 passengers in 2010.[12] A new terminal has been in service since 12 December 2007 and can accommodate up to 1.8 million passengers annually.[13]

The harbour of Brest is mainly dedicated to bulk, hydrocarbon and freight containers. The harbour's facilities can accommodate the largest modern ships. 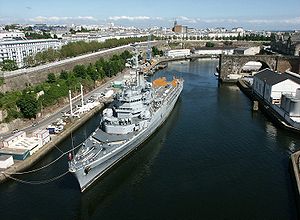 The Penfeld river, historic centre of the arsenal of Brest

Due to its location, Brest is regarded as the first French port that can be accessed from the Americas. Shipping is big business, although Nantes and Saint-Nazaire offer much larger docks and attract more of the larger vessels. Brest has the 9th French commercial harbour including ship repairs and maintenance. The protected location of Brest means that its harbor is ideal to receive any type of ship, from the smallest dinghy to the biggest aircraft carrier (the USS Nimitz has visited a few times). Naval construction is also an important activity: for example, the French aircraft carrier Charles de Gaulle (R91) was built by Direction des Constructions Navales (DCN) in Brest.

Despite its image of an industrialised city whose activity depends mainly on military order, the service sector represents 75% of the economic activity.[14] The importance of service sector is still increasing while the industrialised activity decaying, explaining the unchanged rate of working-class in Brest. Brest also hosts headquarters for many subsidiaries like the banking group Arkéa... Research and conception is taking an increasing importance. Brest claims to be the largest European centre for sciences and techniques linked to the sea: 60% of the French research in the maritime field is based in Brest.[15] 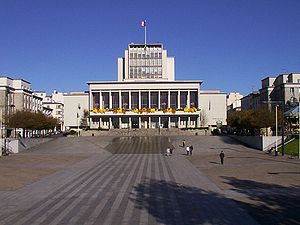 Breton is not commonly spoken in the city of Brest, which was the only French-speaking city in western Brittany before the 1789 French Revolution, despite the surrounding countryside being fully Breton-speaking at that time. Like other French minority languages, Breton does not have any official language status in France.

The municipality launched a linguistic plan to revive Breton as a language through Ya d'ar brezhoneg on 16 June 2006. In 2008, 1.94% of primary-school children attended French-Breton bilingual Diwan schools.[16] Besides bilingual schools, the Breton language is also taught in some schools and universities. 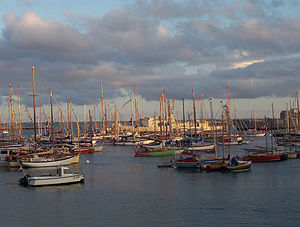 The city is host to several events to celebrate its long maritime history. The largest is held every four years, when the town organises a tall ship meeting. The last such tall ship event is "Les Tonnerres de Brest 2012" .

Brittany's most famous local delicacy, the Breton crêpe, is the main culinary feature apart from seafood. There are many crêpe restaurants (called crêperies). Breton apple cider is often featured.

Traditional biscuits include Traou Mad, which is a full-fat butter biscuit, similar to Scottish shortbread.

Since 1901 Brest has served as the midpoint for the 1,200 km (750 mi) bicycle endurance event, Paris–Brest–Paris. Brest is home to Stade Brestois 29, a football team in Ligue 2.

Brest is also home to Les Albatros, an ice hockey team in Ligue Magnus, and 2 league titles in the 90's. 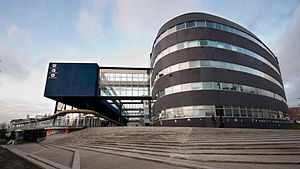 Primarily research centre of western Brittany, Brest and its surrounding area is the home of several research and elite educational establishments:

Brest was the birthplace of: 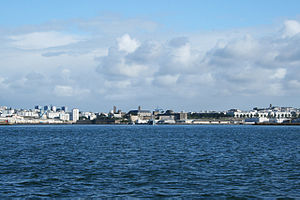 The entrance of the harbour of Brest
See also: List of twin towns and sister cities in France

Denver Sister Cities International takes a trip with Delegates from Denver, Colorado to their Sister City Brest, France every summer.

The trip is called Séjour and more information can be found at frenchsejour.com

Brest has an official friendly relationship (protocole d'amitié) with:[20]

Panorama from the Recouvrance bridge of the castle and the Tanguy tower.