From Infogalactic: the planetary knowledge core
Jump to: navigation, search
For the town, see Dingy, West Virginia.
Distinguish from the adjective dingy. 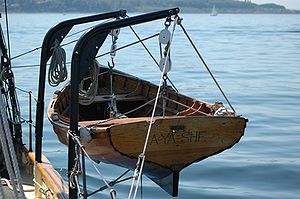 Dinghy of the schooner Adventuress 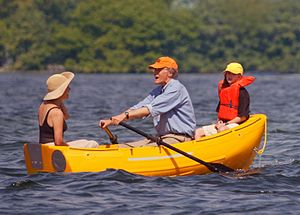 A dinghy (or dingey) is a type of small boat, often carried or towed for use as a ship's boat by a larger vessel. The term is a loanword from the Bengali ḍiṅgi, Urdu ḍīngī & Hindi ḍieṁgī.[1][Note 1] Utility dinghies are usually rowboats or have an outboard motor, but while some are rigged for sailing, they are not to be confused with sailing dinghies which are designed first and foremost for this purpose.

Dinghies usually range in length from about 2 to 6 m (6 to 20 ft). Larger auxiliary vessels are generally called tenders, pinnaces or lifeboats. Folding and take-down multi-piece (nesting) dinghies are used where space is limited. Some newer dinghies have much greater buoyancy, giving them more carrying capacity than older boats of the same size.

Dinghy is also a term given to a small car, truck or suv towed behind a motor home.[citation needed] 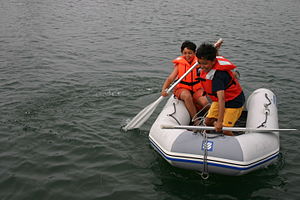 On yachts shorter than 10 m (33 ft), there is usually not enough room for a reasonably sized dinghy. A dinghy is useful to avoid the need for expensive dock or slip space, so owners of small yachts compromise by carrying a small rigid dinghy or deflated inflatable, or by towing a larger dinghy. Space can be saved by storing items in containers or bags that are tied to the dinghy. Dinghies are sometimes used as lifeboats; recently self-rescue dinghies have come back into use as proactive lifeboats that can be sailed to safety.

Rigid dinghies for small yachts are very small, about 2 m (6 9⁄16 ft), usually with a pram (blunt) bow to get more beam (width) in a shorter length. Larger dinghies are towed and should have reserve buoyancy, an automatic bailer, and a cover to prevent them from being lost at sea. Most masters prefer a tow cable long enough to put the dinghy on the back side of the swell to prevent the dinghy from ramming the transom of the yacht.

Inflatables are inconvenient to tow and take extra time to inflate but are very compact and fit easily into place while at sea. Space can also be saved by using a sectional two-piece rigid dinghy that is towed while in harbour and disassembled into two nesting pieces while off-shore; typically the bow section fits inside the stern and is stored upside down on deck. There are several types of collapsible rigid dinghy that dismantle into a series of flat panels for easy stowage. 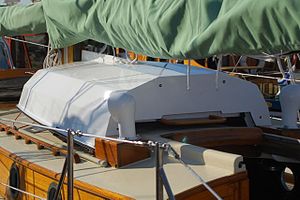 Inflatable tubes can be fitted to an existing hard dinghy, increasing buoyancy and stability.

A dinghy should have a strong ring on the bow. The ring secures the painter (the line that anchors the boat to a dock), and is used for towing and anchoring. Ideally, the dinghy should also have two other rings (one on each side of the stern transom) which, with the bow ring, are used for lifting and securing the dinghy for stowage.

The only other essential pieces of hardware are rowlocks (also known as oarlocks). Conventionally, a dinghy will have an oar on each side. A single sculling oarlock or notch on the transom is less common, but requires less space; and is used with a single sculling oar moving back and forth, never leaving the water, as used on a sampan.

Many modern dinghies are made of synthetic materials. These require minimal care and do not rot but can suffer from fibre glass pox which is caused by the ingress of saltwater through the gel coat. Inflatable dinghies can be made of fabrics coated with Hypalon, neoprene or PVC.[3] Rigid dinghies can be made of glass-fibre reinforced plastic (GRP) but injection-moulded one-piece hulls are also available. Other materials for modern rigid dinghies include aluminium, marine plywood which tends to be much lighter than most types and, with the advent of sturdy, UV resistant polyurethane varnishes, wood. Some wooden dinghies (especially of classic or historical form) are built using the carvel or clinker methods. Favoured woods, in order of rot-resistance, are White oak, Black locust, species of cedar and pine, true as well as African and Asian mahoganies, fir and spruce. Rot resistance depends on paint as well as protection from rainwater . Plastic hardware is sometimes used, but bronze and stainless steel are good corrosion-resistant materials for hardware, although stainless steel can be subject to crevice corrosion after many years especially in a boat using an outboard or other motor and must be inspected. Stainless steel should never be used for fittings permanently in the water. Owners should check that the correct grade of stainless steel is used in a fitting .Working boats may use lower-cost galvanized steel, but the hardware may need to be re-galvanized or replaced eventually.

The dinghy is generally carried inverted amidships on yachts,on top of the coachroof where there is the most space. It is useful for a dinghy carried this way to have handholds built into the bottom, making launching easier and providing handholds on deck.

Most yachts launch their dinghies by hand or with a simple lifting tackle rigged from the main mast. Davits over the transom is convenient and elegant, but sailing in a heavy following sea could cause the loss of a dinghy. If a dinghy is towed, an extra line with a loop in the end (known as a lazy painter) can be attached to a dinghy so that if the towing line breaks, there is a line to grab with a boat hook. This makes retrieval easier at sea, especially if the boat is partially swamped.

In some countries dinghies have names or registration numbers. On hard dinghies these are usually on the bow, on inflatables on the inside of the transom. 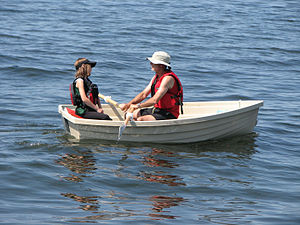 Operating a dinghy with oars

Small dinghies under 3.7 m (12 ft) are usually powered by rowing with one set of oars. Beyond 5 m (16 ft) it is feasible to have 2 or even 3 rowers, normally using a pair of oars. In some models, sliding thwarts allow far more powerful rowing while in others, a removable thwart can permit standing rowing. Some self-rescue dinghy/yacht tender dinghies have two sets of oarlocks(rowlocks) and an adjustable middle seat to allow for ergonomically efficient rowing positions. A single sculling oar with an oarlock on the rear transom can be a compact emergency oar. Inflatable dinghies without a rigid bottom are difficult to row more than a short distance, and are usually powered with an outboard motor, or, if necessary, paddled. 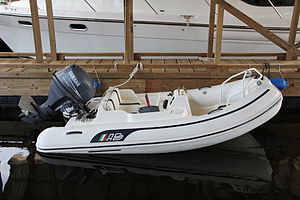 A motorized dinghy with seats and a console

Another option is an outboard motor. Two horsepower per meter can reach hull speed. Ten horsepower per metre will put a flat-bottomed dinghy on plane. A 3-metre (10 ft) dinghy with a hard V-bottom hull and a fifteen-horsepower outboard can reach speeds of 25 mph (40 km/h; 22 kn). The gas tank is usually placed under the rear thwart. Engines always swing up so the dinghy can be grounded without damage. Since the transom may need to be cut down for the engine to fit properly, an engine well should be used to prevent low waves from splashing over the transom and flooding the boat. 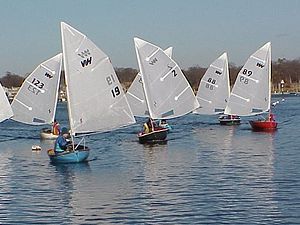 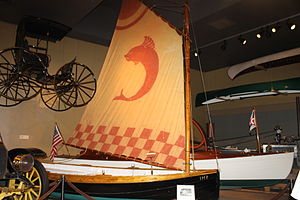 A typical sailing rig for a dinghy is a gunter with a two-piece folding mast stepped through a thwart and resting on the keel. It is raised by pulling a rope called a halyard. A single-sailed rig is usually preferred over a marconi or Bermudan (with a triangular mainsail and jib) because this rig is simpler, with no stays to attach. Sprit rigs also have no boom, and the advantage that the sail can be brailed up out of the way against the mast when rowing or motoring. Lug rigs are another common single sail type used in small dinghies, both standing and balanced (with some area forward of the mast), and usable with or without a boom.

Traditional working dinghies have a lee board that can be hooked over the side. This does not split the cargo space. A sailing rudder is usually tied or clipped to a simple pair of pintles (hinge pins) on the transom with the bottom pintle being longer so that the rudder can be mounted one pintle at a time. The rope keeps the rudder from floating off in a wave. Both rudders and lee boards have swiveling tips so the dinghy can be landed. Rudders are often arranged so the tiller folds against the rudder to make a compact package. 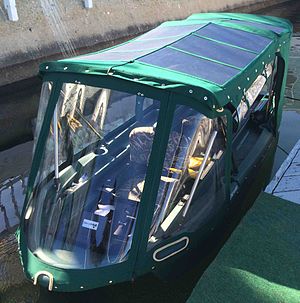 This solar dinghy was created by Leonard Holmberg. Based on Freedom Electric's X10 hull. One of the only tri-power small boats in the world, Solar, Propane, Lithium "SPL"

Racing dinghies usually have a daggerboard or centreboard to better sail upwind. The trunk is in the middle of what would otherwise be cargo area. A self-rescue dinghy intended to be used as a proactive lifeboat has leeboards on either side, to allow for maximum open cockpit area. 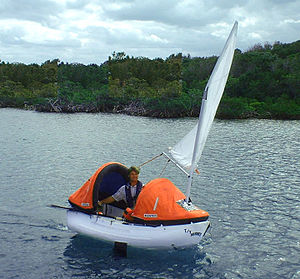 Additional equipment that is generally considered necessary or legally required[citation needed] on a dinghy includes:

This equipment should be in a bag made of water-resistant materials and tied to a thwart or stowed inside a locker.

Andersen-style self-bailers are also useful for engine-driven and sailing dinghies. These slot-shaped seacocks project into the stream below the hull and open when submerged and moving rapidly using the venturi effect. The downside of this solution is that if the boat is beached in sand, it can clog the self-bailers until the boat is inverted and the sand removed. These devices do not replace a hand-bailer as they are only useful if the vessel is moving.

A small anchor can be used to allow the crew of the dinghy to fish or rest. Dinghy anchors are usually either a mushroom shape, a small folding grapple hook or the more modern and efficient Danforth type, with floating rope that will avoid being cut by snags on the bottom. The mushroom is used in locations where the bottom is very muddy, while the grapple works better in rocks. Some persons prefer a small Danforth or plow,because of their superior holding power in all but rocks, but these have sharp edges, and need to be set with a little care. Even a dinghy should have a length of chain attached to the anchor - the same length as the dinghy. The warp then attaches to the short chain with a wired shackle. This gives added weight and help in setting an anchor. It also stops the warp fraying on sharp rocks when the dinghy swings to and fro with the tide. Generally an anchor warp should be 4 times the depth of the water. In strong winds this can be extended to 8 times the depth but most dinghies are not seaworthy enough to be anchored securely in such storm conditions.

A dinghy should not be able to scratch the mother-boat's paint; therefore a fender made from a length of heavy rope (or a strip of polyurethane) can be tied loosely to the outside of the bulwarks. This also provides a handhold for launching, or for people overboard to climb into the boat. Many modern dinghies have a molded ridge of plastic to replace the rope. A fitted acrylic canvas cover can shed seas or act as a shade or storage cover. Traditionally it toggles to the fender-rope or is suspended from the gunter (small folding mast) but can also be tied to a few points and secured with snaps or Velcro. Depending on the design there may be a large locker under a thwart.