Claude of France (13 October 1499 – 20 July 1524), daughter of Louis XII, inherited the Duchy of Brittany from her mother, Anne, and became Queen of France as the first wife of Francis I.

Claude was born on 13 October 1499 in Romorantin-Lanthenay[1] as the eldest daughter of Louis XII of France and Anne of Brittany. She was named after Claudius of Besançon, a saint her mother had invoked during a pilgrimage so she could give birth to a living child: during her two marriages, Queen Anne had at least fourteen pregnancies, of whom, only two children survived to adulthood: Claude and her youngest sister Renée, born in 1510.

Because her mother had no surviving sons, Claude became heiress to the Duchy of Brittany. The crown of France, however, could pass only to and through male heirs, according to Salic Law. Eager to keep Brittany separated from the French crown, Queen Anne, with help of Cardinal Georges d'Amboise, promoted a solution for this problem. The Cardinal essentially began a dispute with the Pierre de Rohan-Gié, the Marshal of Gié, who fervently supported the idea of a marriage between the princess and the Duke of Valois, the heir of the French throne after Louis XII, and thus kept Brittany united to France.[2]

On 10 August 1501 at Lyon was signed the marriage contract between Claude and the future Holy Roman Emperor Charles V by François de Busleyden, Archbishop of Besançon, William de Croÿ, Nicolas de Rutter and Pierre Lesseman, all ambassadors of Duke Philip of Burgundy, Charles' father. A part of the contract promised the inheritance of Brittany to the young prince, already the next in line to thrones of Castile and Aragon, Austria and the Burgundian Estates. In addition, the first Treaty of Blois, signed in 1504, gave Claude an considerable dowry in the -likely- case of Louis XII's death without male heirs: besides Brittany, Claude also received the Duchies of Milan and Burgundy, the Counties of Blois and Asti[3] and the territory of the Republic of Genoa, then occupied by France.[4] Thus, all the causes of the future rivalry between Charles V and Francis I have been decided even before the succession of the two princes.

In 1505, Louis XII, very sick, fearing for his life and not wishing to threaten the reign of his only heir, cancelled the engagement in the Estates Generals of Tours, in favor of the young Duke of Valois, the future Francis I. Indeed, previously Louise of Savoy obtained from the king a secret promise that Claude could be married to her son.[5] Anne of Brittany, furious to see the triumph of Marshal of Gié, exerted all her influence to obtain his conviction for treason before the Parliament of Paris.[6] 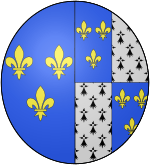 Coat of arms of Queen Claude.

On 9 January 1514, when her mother died, Claude became Duchess of Brittany; and four months later, on 18 May, she married her cousin Francis at Saint-Germain-en-Laye. With this union, it was secured that Brittany would remain united to the French crown, if the third marriage of Louis XII with Mary of England (celebrated on 9 October 1514) would not produce the long-waited heir. However, the union was short-lived and childless: Louis XII died less than three months later, on 1 January 1515, reputedly worn out by his exertions in the bedchamber.[7] Francis and Claude became king and queen, the third time in history that the Duchess of Brittany became Queen of France. 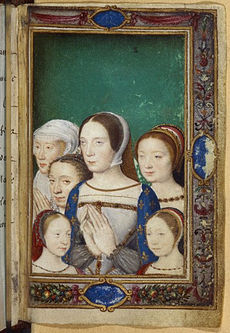 Claude surrounded by her daughters (Charlotte, Madeleine and Marguerite), her sister Renée (or her deceased older daughter Louise) and her husband's second wife Eleanor of Austria, in the Livre d'heures de Catherine de Medicis, 1550. Currently in the Bibliothèque nationale de France.

As Queen, Claude was eclipsed at court by her mother-in-law, Louise of Savoy, and her sister-in-law, the literary Navarrese queen Margaret of Angoulême. She never ruled over Brittany; in 1515 she gave the government of her domains to her husband in perpetuity. Unlike her younger sister Renée, she seems to have never showed any interest in her maternal inheritance nor had any disposition to politics, as she preferred to devote herself to religion under the influence, according to some sources, of Christopher Numar of Forli, who was the confessor of her mother-in-law. Gabriel Miron repeated his functions under Anne of Brittany and remained as Chancellor of Queen Claude and first doctor; he wrote a book entitled de Regimine infantium tractatus tres.[8]

After Francis became king in 1515, Anne Boleyn stayed as a member of Claude's household. It's assumed that Anne served as Claude's translator whenever there were English visitors, such as in 1520, at the Field of Cloth of Gold. Anne Boleyn returned to England in late 1521, where she eventually became Queen of England as the second wife of Henry VIII. Diane de Poitiers, another of Claude's ladies, was a principal inspiration of the School of Fontainebleau of the French Renaissance, and became the lifelong mistress of Claude's son, Henry II.

Claude was crowned Queen of France at St. Denis Basilica on 10 May 1517 by Cardinal Philippe de Luxembourg (also known as Cardinal du Mans), who "anointed her in the breast and forehead".[9]

She spent almost all her marriage in an endless round of annual pregnancies. Her husband had many mistresses, but was usually relatively discreet. Claude imposed a strict moral code on her own household, which only a few chose to flout.

About Claude, the historian Brantôme wrote:

I must speak about madame Claude of France, who was very good and very charitable, and very sweet to everyone and never showed displeasure to anybody in her court or of her domains. She was deeply loved by the King Louis and the Queen Anne, her father and mother, and she was always a good daughter to them; after the King took the peaceful Duke of Milan, he made him declare and proclaim her in the Parliament of Paris the Duchess of the two most beautiful Duchies of Christendom, Milan and Brittany, one from the father and the other from the mother. What an heiress! if you please. Both Duchies joined in all good deed to our beautiful kingdom.[10]

The pawn of so much dynastic maneuvering, Claude was short in stature and afflicted with scoliosis, which gave her a hunched back, while her husband was bigger and athletic. The successive pregnancies made her appear continuously plump, which drew mockeries at Court. Foreign ambassadors noted her "corpulence", claudication, the strabismus affecting her left eye, her small size, and her ugliness, but they acknowledged her good qualities.[11] She was little loved at court after the death of her parents. Brantôme testified:

That the king, her husband gave her the pox, which shortened her days. And madame the Regent [Louise of Savoy] bullied her constantly (...).

The king's will imposed the omnipresence of his mistress, Françoise de Foix.

Claude and Francis I had seven children, two of whom lived past the age of thirty: 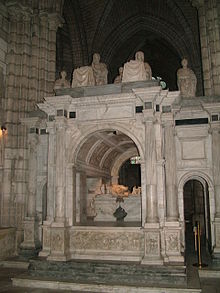 Tomb of Francis I and Claude of France at St. Denis Basilica.

Claude died on 20 July 1524 at the Château de Blois, aged twenty-four. The exact cause of her death was disputed among sources and historians: while some alleged that she died in childbirth or after a miscarriage,[12] others believed that she died for exhaustion after her many pregnancies or after suffering from bone tuberculosis (like her mother) and finally some believed that she died by the syphilis caught from her husband.[13][14] She was buried at St. Denis Basilica.

She was initially succeeded as ruler of Brittany by her eldest son, the Dauphin Francis, who became Duke Francis III, with Claude's widower King Francis I as guardian. After the Dauphin's death in 1536, Claude's second son, Henry, Duke of Orleans, became Dauphin and Duke of Brittany. He later became King of France as Henry II.

Claude's widowed husband himself remarried several years after Claude's death, to Eleanor of Austria, the sister of Emperor Charles V. The atmosphere at court became considerably more debauched, and there were rumours that King Francis's death in 1547 was due to syphilis.

The Prayer Book of Queen Claude

The prayer book of Claude of France, is a tiny, jewel-like manuscript that was made for Claude around 1517, the year she was crowned queen of France. Her coat of arms appears on three different folios. The book is richly illustrated: the borders of each leaf are painted, front and back, with 132 scenes from the lives of Christ, the Virgin Mary, and numerous saints. The manuscript and a companion Book of Hours also made for the queen (in a Paris private collection) were illuminated by an artist who was given the nickname Master of Claude de France after these two volumes. It was donated to The Morgan Library & Museum in New York City in 2008 by the widow of Alexandre Paul Rosenberg in memory of her husband.[15]

Claude is remembered in a classic small plum, the size of a walnut, pale green with a glaucous bloom. It is still called "Reine Claude" (literally, "Queen Claude") in France and is known in England as a "greengage".

Queen Claude of France is played by Gabriella Wright in season one of the Showtime series The Tudors.