Leo I the Thracian

Ruling the Eastern Empire for nearly 20 years, Leo proved to be a capable ruler. He oversaw many ambitious political and military plans, aimed mostly for the aid of the faltering Western Roman Empire and recovering its former territories. He is notable for being the first Eastern Emperor to legislate in Greek rather than Latin.[2]

He is commemorated as a Saint in the Orthodox Church, with his feast day on January 20.[3][4] 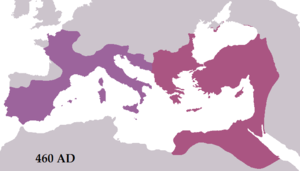 The Roman Empire in 460 during the reign of Leo

He was born Leo Marcellus in Thracia or in Dacia Aureliana province in the year 401 to a Thraco-Roman family.[5] His Dacian origin[6] is mentioned by Candidus Isaurus,[7][8] while John Malalas believes that he was of Bessian stock.[7][9] He served in the Roman army, rising to the rank of comes. Leo was the last of a series of emperors placed on the throne by Aspar, the Alan serving as commander-in-chief of the army, who thought Leo would be an easy puppet ruler. Instead, Leo became more and more independent from Aspar, causing tension that would culminate in the assassination of the latter.

Leo's coronation as emperor on 7 February 457,[10][1] was the first known to involve the Patriarch of Constantinople.[11] Leo I made an alliance with the Isaurians and was thus able to eliminate Aspar. The price of the alliance was the marriage of Leo's daughter to Tarasicodissa, leader of the Isaurians who, as Zeno, became emperor in 474. In 469, Aspar attempted to assassinate Zeno[12] and very nearly succeeded. Finally, in 471, Aspar's son Ardabur was implicated in a plot against Leo and both were killed by palace eunuchs acting on Leo's orders.[13]

Leo overestimated his capacities and he made some errors that menaced the internal order of the Empire. The Balkans were ravaged by the Ostrogoths, after a disagreement between the Emperor and the young chief Theodoric the Great who had been raised at Leo's court in Constantinople, where he was steeped in Roman government and military tactics. There were also some raids by the Huns. However, these attackers were unable to take Constantinople thanks to the walls, which had been rebuilt and reinforced in the reign of Theodosius II and against which they possessed no suitable siege engines.

Leo's reign was also noteworthy for his influence in the Western Roman Empire, marked by his appointment of Anthemius as Western Roman Emperor in 467. He attempted to build on this political achievement with an expedition against the Vandals in 468, which was defeated due to the arrogance of Leo's brother-in-law Basiliscus. This disaster drained the Empire of men and money. The expedition, which cost 130,000 pounds of gold and 700 pounds of silver,[citation needed] consisted of 1,113 ships carrying 100,000 men, but in the end lost 600 ships. After this defeat, Vandals raided Greek coasts until a costly peace agreement was signed between Leo and Genseric.

Leo became very unpopular in his last days as Emperor for abolishing any non-religious celebration or event on Sundays.[citation needed]

Leo and Verina had three children. Their eldest daughter Ariadne was born prior to the death of Marcian (reigned 450 – 457).[14] Ariadne had a younger sister, Leontia. Leontia was first betrothed to Patricius, a son of Aspar, but their engagement was probably annulled when Aspar and another of his sons, Ardabur, were assassinated in 471.[citation needed] Leontia then married Marcian, a son of Emperor Anthemius and Marcia Euphemia. The couple led a failed revolt against Zeno in 478–479. They were exiled to Isauria following their defeat.[15]

An unknown son was born in 463. He died five months following his birth. The only sources about him are a horoscope by Rhetorius and a hagiography of Daniel the Stylite.[15]

The Georgian Chronicle, a 13th-century compilation drawing from earlier sources, reports a marriage of Vakhtang I of Iberia to Princess Helena of Byzantium, identifying her as a daughter of the predecessor of Zeno.[16] This predecessor was probably Leo I, the tale attributing a third daughter to Leo. Cyril Toumanoff identified two children of this marriage: Mithridates of Iberia; and Leo of Iberia. This younger Leo was father of Guaram I of Iberia. The accuracy of the descent is unknown.