Strasserism (German: Strasserismus or Straßerismus) was the strand of Nazism that called for a more radical, mass-action and worker-based form of National Socialism, hostile to Jews not from a racial, ethnic, or religious perspective, but from an anti-capitalist basis, to achieve a national rebirth. It derives its name from Gregor and Otto Strasser, the two Nazi brothers initially associated with this position.

Opposed on strategic views to Adolf Hitler, Otto Strasser was expelled from the Nazi Party (NSDAP) in 1930 and went into exile in Czechoslovakia, while Gregor Strasser was killed in Germany on June 30, 1934 during the so-called Night of the Long Knives. Strasserism remains an active position within strands of neo-Nazism. 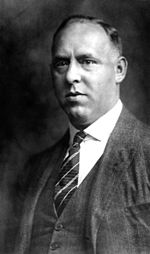 Gregor Strasser (1892–1934) began his career in ultranationalist politics by joining Freikorps after serving in World War I. Involved in the Kapp Putsch he formed his own völkischer Wehrverband ("popular defense union") which he merged into the NSDAP in 1921. Initially a loyal supporter of Adolf Hitler, he took part in the Beer Hall Putsch and held a number of high positions in the Nazi Party. Soon however, Strasser became a strong advocate of the socialist wing of the party, arguing that the national revolution should also include strong action to tackle poverty and should seek to build working class support. After Hitler's rise to power, Ernst Röhm, who headed the SA, then the most important paramilitary wing of the Nazi party, called for a "second revolution," aimed at removing the elites from control. This was opposed by the conservative movement, as well as by some Nazis who preferred an ordered authoritarian regime to the radical and disruptive program proposed by the Party's left wing.

Otto Strasser (1897–1974) had also been a member of the Freikorps, but joined the Social Democratic Party (SPD) and fought against the Kapp putsch. However he joined the Nazi Party in 1925, but nonetheless retained his ideas about the importance of socialism. Considered more of a radical than his brother, Otto Strasser was expelled by the Nazi Party in 1930 and set up his own dissident group, the Black Front, which called for a specifically German nationalist form of socialist revolution. He fled Germany in 1933 to live in Czechoslovakia and Canada before returning to West Germany in later life, all the while writing prolifically about Hitler and what he saw as his betrayal of national socialist ideals. 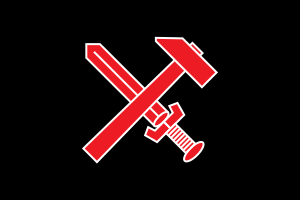 Flag of the Black Front.

The name Strasserism came to be applied to this form of Nazism that developed around the brothers. Although they had been involved in the creation of the National Socialist Program of 1920, both called on the party to commit to 'breaking the shackles of finance capital'.[1] This opposition to "Jewish finance capitalism", which they contrasted to "productive capitalism," was shared by Adolf Hitler himself, who borrowed it from Gottfried Feder.[2]

This populist and antisemitic form of anti-capitalism was further developed in 1925 when Otto Strasser published the Nationalsozialistische Briefe, which discussed notions of class conflict, wealth redistribution and a possible alliance with the Soviet Union. His 1930 follow-up Ministersessel oder Revolution ('Cabinet Seat or Revolution') went further by attacking Hitler's betrayal of the socialist aspect of Nazism, as well as criticizing the notion of Führerprinzip.[3] Whilst Gregor Strasser echoed many of the calls of his brother, his influence on the ideology is less, due to his remaining in the Nazi Party longer and to his early death. Otto, meanwhile, continued to expand his argument, calling for the break-up of large estates and the development of something akin to a guild system and the related establishment of a Reich cooperative chamber to take a leading role in economic planning.[4]

Strasserism, therefore, became a distinct strand of Nazism that, whilst holding on to previous Nazi ideals such as palingenetic ultranationalism and anti-Semitism, added a strong critique of capitalism and framed this in the demand for a more "socialist-based" approach to economics.

It is disputed, however, whether Strasserism effectively represented a distinct form of Nazism. According to historian Ian Kershaw, "the leaders of the SA [which included Gregor Strasser] did not have another vision of the future of Germany or another politic to propose." But they advocated the radicalization of the Nazi regime, and the toppling of the German elites, calling Hitler's rise to power a "half-revolution," which needed to be completed.[5]

During the 1970s the ideas of Strasserism began to be referred to more strongly in European far-right groups as younger members with no concrete ties to Hitler and a stronger sense of anti-capitalism came to the fore.

Strasserite thought in Germany began to emerge as a tendency within the National Democratic Party (NPD) during the late 1960s. These Strasserites played a leading role in securing the removal of Adolf von Thadden from the leadership and following his departure the party became stronger in condemning Hitler for what it saw as his move away from socialism in order to court business and army leaders.[6]

Although initially adopted by the NPD, Strasserism soon became associated with more peripheral extremist figures, notably Michael Kühnen who produced a 1982 pamphlet Farewell to Hitler, which included a strong endorsement of the idea. The People's Socialist Movement of Germany/Labour Party, a minor extremist movement that was outlawed in 1982 adopted the policy, while its successor movement, the Nationalist Front, did likewise, with its ten point programme calling for an 'anti-materialist cultural revolution' and an 'anti-capitalist social revolution' to underline its support for the idea.[7] The Free German Workers' Party also moved towards these ideas under the leadership of Friedhelm Busse in the late 1980s.[8]

Strasserism in the UK

Strasserism emerged in the United Kingdom in the early 1970s and centred on the National Front publication Britain First, the main writers of which were David McCalden, Richard Lawson and Denis Pirie. Opposing the leadership of John Tyndall, they formed an alliance with John Kingsley Read and ultimately followed him into the National Party.[9] The NP called for British workers to "seize the right to work" and offered a fairly Strasserite economic policy.[10] Nonetheless, the NP failed to last for very long. Due in part to Read's lack of enthusiasm for Strasserism, the main exponents of the idea drifted away.[citation needed]

The idea was reintroduced to the NF by Andrew Brons in the early 1980s when he decided to make the party's ideology clearer.[11] However Strasserism was soon to become the province of the radicals in the Official National Front, with Richard Lawson brought in a behind the scenes role to help direct policy.[12] Ultimately this Political Soldier wing opted for the indigenous alternative of distributism, but nonetheless their strong anti-capitalist rhetoric, as well as that of their International Third Position successor, demonstrated influences of Strasserism. From this background Troy Southgate emerged, whose own ideology and those of related groups such as the English Nationalist Movement and National Revolutionary Faction were influenced by Strasserism.

Third Position groups, whose inspiration is generally more Italian in derivation, have often looked to Strasserism due to their strong opposition to capitalism. This was noted strongly in France where the student group Groupe Union Défense and the more recent Renouveau français both extolled Strasserite economic platforms.[13]

Attempts to reinterpret Nazism as having a left-wing base have also been heavily influenced by this school of thought, notably through the work of Povl Riis-Knudsen, who produced the Strasser-influenced work National Socialism: A Left-Wing Movement in 1984.

The Strasser brothers and Strasserite thought in general has been claimed as belonging to National Bolshevism, which has been influential in Russia and to a lesser extent Germany.

In the United States, Tom Metzger also flirted with Strasserism, having been influenced by Kühnen's pamphlet.[15]