Born in 1892 in Bavaria, Strasser served in World War I in an artillery regiment, rising to the rank of first lieutenant. He joined the Nazi Party (NSDAP) in 1920 and quickly became an influential and important figure. He took part in the abortive putsch in Munich in 1923 and was imprisoned, but released early on for political reasons.

Strasser joined a revived NSDAP in 1925 and once again established himself as a powerful and dominant member, hugely increasing the party's membership and reputation in northern Germany. Personal and political conflicts with Adolf Hitler led to his death in 1934 during the Night of the Long Knives.

Gregor Strasser was born on 31 May 1892 into the family of a Catholic judicial officer who lived in the Upper Bavarian market town of Geisenfeld.[1][2] He grew up alongside his younger brother Otto Strasser who was considered the more intellectual of the two.[3] He attended the local Gymnasium and after his final examinations, served an apprenticeship as a pharmacist in the Lower Bavarian village of Frontenhausen from 1910 until 1914.[2]

When war broke out in Europe in 1914, Strasser suspended his studies at Ludwig Maximilians University of Munich to enlist as a volunteer in the German Imperial Army. He served in the 1st Bavarian Field Artillery Regiment, rising to the rank of First Lieutenant and winning the Iron Cross of both classes for bravery.[2][4] In 1918, he resumed his studies at Friedrich-Alexander-University, Erlangen-Nuremberg. He passed his state examination in 1919 and in 1920 started work as a pharmacist in Landshut.[1]

In 1919, Strasser and his brother joined the right-wing Freikorps led by Franz Ritter von Epp. The aim of the group was to suppress Communism in Bavaria. He established and commanded the Sturmbataillon Niederbayern ("Storm Battalion Lower Bavaria"), with the young Heinrich Himmler employed as his adjutant.[2] By March 1920, Strasser's Freikorps was ready to participate in the failed Kapp Putsch, whereas his brother Otto had turned to the left of the political spectrum and helped combat this right-wing coup d'état.[2]

File:Hitler 1928 crop.jpg
Hitler and other top SA officials at a party rally, 1928

By 1920, Strasser, and his paramilitary group, had joined forces with Adolf Hitler's Nazi Party, the National-Socialist German Workers Party (NSDAP), another far-right political party seated in Munich.[1][4] During the autumn of 1922, Strasser officially became a member of the Nazi Party and the SA.[3] Strasser's leadership qualities were soon recognized and he was appointed as regional head of the Sturmabteilung ("Storm Detachment"; SA) in Lower Bavaria.[5] In November 1923, he took an active part in the unsuccessful Beer Hall Putsch, an attempt by Hitler and his party to seize control of Munich. He was tried for high treason and in April 1924 was sentenced to five years' imprisonment at Landsberg Prison.[6]

After a few weeks on 4 May 1924, Strasser was released because he had been elected a member of the Bavarian Landtag for the Nazi-associated "Völkischer Block".[7][8]

Because Strasser led up to 2,000 men in Landshut and was overworked, he began looking for an assistant.[9] Heinrich Himmler, who obtained the job, was tasked with expanding the organization in Lower Bavaria.[10]

On 7 December 1924, Strasser won a seat in the Reichstag of the Weimar Republic for the Deutschvölkische Freiheitspartei ("German-Völkisch Freedom Party"; DVF).[8][11] In both elections, Strasser could not run for the NSDAP, which was banned after the abortive coup.[12] Strasser remained a member of the Reichstag until December 1932.[11] 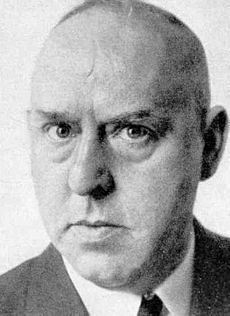 In January 1925, Strasser became leader of the NSDAP's national organisation. He reorganised the party's structure, both in its regional formation and its vertical management hierarchy.[15] The party became a strictly centralist organization with the party's own control machinery and high capability for propaganda.[14][16] Through much of 1925 Strasser took full advantage of his liberties as a member of the Reichstag, traveling extensively throughout northern and western Germany appointing Gauleiters, setting up party branches and delivering numerous public speeches.[17]

After 1925, Strasser's organizational skills helped the NSDAP make a big step from a marginal south German splinter party to a nationwide mass party, appealing to the lower classes and their tendency towards nationalism.[14][16] Its membership increased from about 27,000 in 1925 to more than 800,000 by 1931.[16] Strasser established the NSDAP in northern and western Germany as a strong political association which quickly attained a higher membership than Hitler's southern party section.[14][16] The party's own foreign organization was formed on Strasser's initiative.[18] Together with his brother Otto, Strasser founded the Berlin Kampf-Verlag ("Combat Publishing") in March 1926, which went on to publish, among others, the left leaning weekly newspaper the Berliner Arbeiterzeitung ("Berlin Workers Newspaper").[14][19]

The Strasser brothers ruled the Berlin party organization unchallenged and developed an independent ideological profile from the south German party wing around Hitler.[14][16] They advocated an anti-capitalist social revolutionary course for the NSDAP which at the same time was also strongly antisemitic and anti-communist.[16]

In the mid 1920s, support for the Nazi Party was dropping as hyperinflation ended and the economy improved. Strasser believed the party could regain their popularity if the movement was led in a less dictatorial way. He put forward his ideas to Hitler at the Bamberg Conference in 1926. There was, however, to be no debate; Hitler just spoke for an hour, repudiating Strasser's proposals and was then cheered by his supporters.[12]

The Great Depression greatly impacted Germany and by 1930 there was a dramatic increase in unemployment. During this time, the Strasser brothers started publishing a new daily newspaper in Berlin, the Nationaler Sozialist.[20] Like their other publications, it conveyed the brothers' own brand of Nazism, including nationalism, anti-capitalism, social reform, and anti-Westernism.[21] Goebbels complained vehemently about the rival Strasser newspapers to Hitler, and admitted that their success was causing his own Berlin newspapers to be "pushed to the wall".[22] In late April 1930, Hitler publicly and firmly announced his opposition to Gregor Strasser and appointed Goebbels to replace him as Reich leader of NSDAP propaganda. One of Goebbels' first acts was to ban the evening edition of the Nationaler Sozialist.[23]

The ideological and personal rivalry with Hitler worsened dramatically when Chancellor Kurt von Schleicher offered Strasser the offices of Vice-Chancellor of Germany and prime minister of Prussia in 1932. Schleicher hoped to disunite the Nazi Party with Strasser's help and to pull the left wing of the Nazi Party over to his "national conservative" side, so as to prevent a revolution or takeover by Hitler.[14] Hitler was furious and demanded that Strasser refuse Schleicher's offer.[14]

In December 1932, Hitler was offered the job of vice-chancellor by President Paul von Hindenburg, but he refused to take it.[12] While many in his inner circle, like Goebbels, saw his resistance as heroic, Strasser was frustrated and believed Hitler was wrong to hold out for the Chancellorship, declaring:

He should realize he's being consistently refused this position by everyone! I'm not going to wait for the Führer to be appointed Chancellor, because by then our movement would have collapsed. I therefore resign from the party and am now going to recuperate in the mountains.[12]

Hitler seized upon his resignation to remove all party officials whose first loyalty was to Strasser. All new or continuing NSDAP officials were then required to swear an oath of loyalty to the Führer; this prevented any other influential Nazis from leading a break-away faction.[12]

Strasser continued acting as a publicist, as he did before his fall from power. From June 1931 until its ban in February 1933, he published the weekly newspaper Die Schwarze Front ("The Black Front"), named after Otto's Black Front political organisation, which had little impact on contemporaries because of its small circulation.[24]

Having achieved national power in January 1933, Hitler and the NSDAP began eliminating all forms of opposition in Germany. A "death list" of people regarded as dangerous to the survival of the regime was composed.[12][25] While the list mostly contained the names of known anti-Nazis and rivals, Hitler also used the opportunity to settle old scores.[25] So as not to arouse suspicion, Hitler awarded Strasser the Golden Party Badge and rumors emerged that he would be named Interior Minister.[26]

In what became known as the Night of the Long Knives, selected men of the Schutzstaffel ("Protection Squadron"; SS) arrested and eventually killed at least 85 people from 30 June to 2 July 1934.[25] Among these were Strasser, who had been included in the purge on Hitler's order.[12][25] He was shot once in his main artery from behind in his cell, but did not die immediately. On the orders of SS general Reinhard Heydrich, Strasser was left to bleed to death which took almost an hour.[27] His brother Otto, who had left the NSDAP in July 1930, managed to avoid the Nazi purge and survived World War II.[28][29]