The 1824 United States presidential election was the tenth quadrennial presidential election. It was held from Tuesday, October 26 to Wednesday, December 1, 1824. No candidate won a majority of the electoral vote, becoming the only election to require a contingent election in the House of Representatives under the provisions of the 12th Amendment. On February 9, 1825, the House chose John Quincy Adams as president. It was the first election in which the winner did not achieve at least a plurality of the national popular vote.

The Democratic-Republican Party had won six consecutive presidential elections and was the only national political party. The Congressional caucus nominated Treasury Secretary William H. Crawford for president. Senator Andrew Jackson, House Speaker Henry Clay, and Secretary of State Adams all joined Crawford in seeking the presidency, highlighting factionalism within the party and an end to the Era of Good Feelings. A fifth candidate, John C. Calhoun, withdrew, instead choosing to run for vice president.

Adams won New England, Jackson and Adams split the mid-Atlantic states, Jackson and Clay split the Western states, and Jackson and Crawford split the Southern states. Jackson finished with a plurality of the electoral and popular vote, while the other three candidates each finished with a significant share of the votes. Calhoun became the de facto running mate of Adams and Jackson and as such was elected with a comfortable majority of the vice presidential vote in the Electoral College on 1 December 1824. Clay, who was not a top three finisher, was constitutionally eliminated. Influential within the contingent election, Clay threw his support behind Adams, who shared many of his positions on the major issues. With Clay's backing, Adams won the contingent election on the first ballot.

The Era of Good Feelings associated with the administration of President James Monroe was a time of reduced emphasis on political party identity.[2] With the Federalists discredited, Democratic-Republicans adopted some key Federalist economic programs and institutions.[3][4] The economic nationalism of the Era of Good Feelings that would authorize the Tariff of 1816 and incorporate the Second Bank of the United States portended abandonment of the Jeffersonian political formula for strict construction of the Constitution, limited central government, and primacy of Southern agrarian interests.[5][6][7]

An unintended consequence of wide single-party identification was reduced party discipline. Rather than political harmony, factions arose within the party.[8] Monroe attempted to improve discipline by appointing leading statesmen to his Cabinet, including Secretary of State John Quincy Adams of Massachusetts, Secretary of the Treasury William H. Crawford of Georgia, and Secretary of War John C. Calhoun of South Carolina. General Andrew Jackson of Tennessee led high-profile military missions. Only House Speaker Henry Clay of Kentucky held political power independent of Monroe. He refused to join the cabinet and remained critical of the administration.

Two key events, the Panic of 1819 and the Missouri crisis of 1820, influenced and reshaped politics.[9] The economic downturn broadly harmed workers, the sectional disputes over slavery expansion raised tensions, and both events plus other factors drove demand for increased democratic control.[10] Social disaffection would help motivate revival of rivalrous political parties in the near future, though these had not yet formed at the time of the 1824 election.[11]

The previous competition between the Federalist Party and the Democratic-Republican Party collapsed after the War of 1812 due to the disintegration of the Federalists's popular appeal. President James Monroe of the Democratic-Republicans was able to run without opposition in the election of 1820. Like previous presidents who had been elected to two terms, Monroe declined to seek re-nomination for a third term.[12] Vice President Daniel D. Tompkins was considered unelectable due to his overwhelming unpopularity and major health problems. The presidential nomination was thus left wide open within the Democratic-Republican Party, the only major national political entity remaining in the United States.

The Congressional caucus nominated Crawford for president and Albert Gallatin for vice president, but it was sparsely attended and was widely attacked as undemocratic. Gallatin had not sought the nomination and soon withdrew at Crawford's request. Gallatin was also dissatisfied with repeated attacks on his credibility made by the other candidates. He was replaced by North Carolina Senator Nathaniel Macon. State legislatures also convened state caucuses to nominate candidates.[13]

Candidates who withdrew before election

All four candidates were nominated by at least one state legislature.[14] Andrew Jackson was recruited to run for the office of the president by the state legislature of Tennessee. Jackson did not seek the task of running for president. Instead, he wished to retire to his estate on the outskirts of Nashville called the Hermitage. However, Jackson was not one to decline such a request.[15][better source needed]

Candidates drew voter support by different states and sections. Adams dominated the popular vote in New England and won some support elsewhere, Clay dominated his home state of Kentucky and won pluralities in two neighboring states, and Crawford won the Virginia vote overwhelmingly and polled well in North Carolina. Jackson had geographically the broadest support, though there were heavy vote concentrations in his home state of Tennessee and in Pennsylvania and populous areas where even he ran poorly.

Policy played a reduced role in the election, though positions on tariffs and internal improvements did create significant disagreements. Both Adams and Jackson supporters backed Secretary of War John C. Calhoun of South Carolina for vice president. He easily secured the majority of electoral votes for that office. In reality, Calhoun was vehemently opposed to nearly all of Adams's policies, but he did nothing to dissuade Adams supporters from voting for him for vice president.

The campaigning for presidential election of 1824 took many forms. Contrafacta, or well known songs and tunes whose lyrics have been altered, were used to promote political agendas and presidential candidates. Below can be found a sound clip featuring "Hunters of Kentucky", a tune written by Samuel Woodsworth in 1815 under the title "The Unfortunate Miss Bailey". Contrafacta such as this one, which promoted Andrew Jackson as a national hero, have been a long-standing tradition in presidential elections. Another form of campaigning during this election was through newsprint. Political cartoons and partisan writings were best circulated among the voting public through newspapers. Presidential candidate John C. Calhoun was one of the candidates most directly involved through his participation in the publishing of the newspaper The Patriot as a member of the editorial staff. This was a sure way to promote his own political agendas and campaign. In contrast, most candidates involved in early 19th century elections did not run their own political campaigns. Instead it was left to volunteer citizens and partisans to speak on their behalf.[16][17][18][19]

The 1824 presidential election marked the final collapse of the Republican-Federalist political framework. The electoral map confirmed the candidates' sectional support, with Adams winning in New England, Jackson having wide voter appeal, Clay attracting votes from the West, and Crawford attracting votes from the eastern South. Jackson earned only a plurality of electoral votes. Thus, the election was decided by the House of Representatives. John C. Calhoun, supported by Adams and Jackson, easily won the vice presidency.

With no electoral vote majority, a contingent election took place in the U.S. House of Representatives.

Following the provisions of the 12th Amendment, the top three candidates by electoral votes were admitted as candidates in the House: Andrew Jackson, John Quincy Adams, and William Crawford, with Speaker of the House Henry Clay, who had finished fourth, being eliminated.

Clay detested Jackson and had said of him, "I cannot believe that killing 2,500 Englishmen at New Orleans qualifies for the various, difficult, and complicated duties of the Chief Magistracy."[22] Moreover, Clay's American System was closer to Adams's position on tariffs and internal improvements than Jackson's. Even if Clay had wished to align with Crawford over Jackson, which was highly unlikely in any event since Clay's policy differences with Crawford were even deeper, especially on matters of the tariff, and the fact Crawford had been in poor health, no path to victory was evident.

Ignoring the nonbinding directive of the Kentucky legislature that its House delegation choose Jackson, Clay used his political influence in the House to motivate House delegations in states where he had won at least a voting plurality to vote for Adams.[23] Thus, Adams was elected president on February 9, 1825, on the first ballot,[24][25] with 13 states, followed by Jackson with seven, and Crawford with four.

Balloting in the contingent election

Adams' victory shocked Jackson, who, as the winner of a plurality of both the popular and electoral votes, expected the House to choose him. Not long before the contingent House election, an anonymous statement appeared in a Philadelphia paper, called the Columbian Observer.

The statement, said to be from a member of Congress, essentially accused Clay of selling Adams his support for the office of Secretary of State. No formal investigation was conducted, so the matter was neither confirmed nor denied. When Clay was indeed offered the position after Adams was victorious, he opted to accept and continue to support the administration he voted for, knowing that declining the position would not have helped to dispel the rumors brought against him.[29] By appointing Clay his Secretary of State, President Adams essentially declared him heir to the presidency, as Adams and his three predecessors had all served as Secretary of State.

Jackson and his followers accused Adams and Clay of striking a "corrupt bargain", and the Jacksonians would campaign on this claim for the next four years, ultimately helping Jackson defeat Adams in 1828. 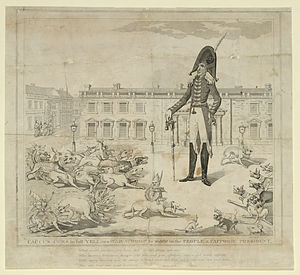 Caucus curs in full yell, by James Akin, 1824 (critique of "the press's treatment of Andrew Jackson, and on the practice of nominating candidates by caucus")[30]