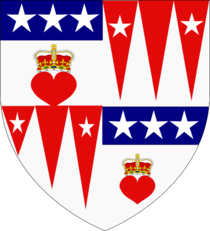 Undifferenced arms of the Earl of Morton from 1533

The title Earl of Morton was created in the Peerage of Scotland in 1458 for James Douglas of Dalkeith. Along with it, the title Lord Aberdour was granted. This latter title is the courtesy title for the eldest son and heir to the Earl of Morton.

The Douglases of Dalkeith are descended from Andrew Douglas of Hermiston (or Herdmanston) (d.b. 1277), younger son of Archibald I, Lord of Douglas (fl. c. 1198–1238). He was succeeded by his son William Douglas of Hermiston, a signatory of the Ragman Roll in 1296. William of Hermiston's son, James Douglas of Lothian succeeded his father and produced two sons, Sir William Douglas and Sir John Douglas. Sir William Douglas, known as the Knight of Liddesdale or the Flower of Chivalry obtained the privileges of the barony of Dalkeith, in Midlothian, in 1341, and the barony of Aberdour, in Fife, in 1342. Following his murder at the hands of his godson William Douglas, 1st Earl of Douglas, both baronies passed to his nephew, James Douglas, 1st Lord Dalkeith. James Douglas was confirmed in this position when his title was ratified by the Earl of Douglas prior to 1370. The lands of Dalkeith, and Aberdour, in Fife, were combined as a single barony in 1386, with the principal seat at Dalkeith Castle, and a secondary residence at Aberdour Castle.[1] James was the brother of Nicholas Douglas, 1st Lord of Mains.[2]

The 4th Lord Dalkeith succeeded to his estates upon the resignation of his father c. 1457 and in 1458 was raised to the peerage as Earl of Morton, prior to his marriage to Joanna, the deaf and dumb daughter of King James I.[1] Lord Dalkeith was then a subsidiary title held by the Earls of Morton, and used as a courtesy title for the eldest son and heir, until the title and estates of Dalkeith were sold to the Earl of Buccleuch by the 7th Earl in 1642. When in 1458, James Douglas, lord Dalkeith, was to receive the name 'Morton' for his intended earldom, a protest was presented against this creation, asserting correctly that the lands of Mortoun belonged heritably to his step-grandmother, Janet Borthwick, widow of Sir James Douglas, known as 1st Lord of Dalkeith, and to her son William Douglas (progenitor of the Whittingehame branch of the Douglases), to which the Chancellor answered that "Lord Dalkeith was not to receive his title in the Earldom for the lands of Mortoun lying in the Lordship of Niddisdale but for the lands of Mortoun in the territory of Caldercleir".

In 1538, James V summoned the 3rd Earl before the Privy Council for non-payment of his feudal dues,[1] and in 1540 the Earl was banished to Inverness.[3] Morton reached Brechin, in Angus, where he signed a deed resigning his lands to his kinsman Robert Douglas of Lochleven, who was then compelled to resign the lands in turn to James V.[3] After James V's death in late 1542, George Douglas of Pittendreich and the Earl of Arran assisted Morton in reclaiming his lands, including Aberdour. In return their sons were to marry two of Morton's three daughters. Pittendreich's son James (1525–1581) married the heiress, Elizabeth, and succeeded to the earldom in 1553.[3]

Historical residences of the Earl of Morton include: