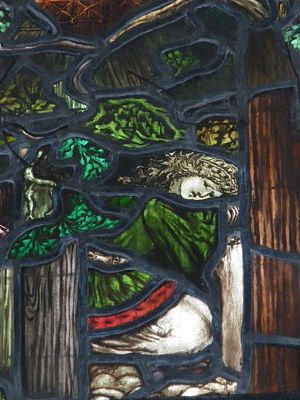 Frithuswith hiding with swine. From a stained glass in the Lady Chapel At Gloucester Cathedral. 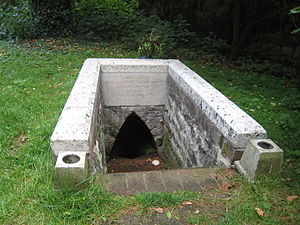 Saint Frithuswith[1] (c. 650 – 19 October 727; Old English: Friðuswīþ; also known as Frideswide, Frideswith, Fritheswithe, Frevisse, or simply Fris) was an English princess and abbess. She is credited with establishing a religious site later incorporated into Christ Church in Oxford — Frithuswith was the first abbess of this Oxford double monastery.[2] Frithuswith was the daughter of a Mercian sub-king named Dida of Eynsham, whose lands occupied western Oxfordshire and the upper reaches of the River Thames.[3] Dida is known to have endowed churches in Bampton and Oxford.

Two twelfth-century Latin texts (edited by John Blair)[4] were adapted into two Middle English accounts of the Life of Saint Frithuswith, which are included in the South English Legendary.[5] The accounts differ slightly in their story. The shorter tale recounts that Frithuswith was born to Didan (an Anglo-Saxon sub-king) and his wife Safrida around AD 650. With the help of her father, Frithuswith founded a priory (St Frideswide's Priory) while still young, but even though Fritheswith was bound to celibacy, Algar (that is, Æthelbald), a Mercian king, sought to marry her. When Frithuswith refused him, Algar tried to abduct her.

A longer tale is attributed to Robert of Cricklade, then prior of Oxford, and was later recorded by William of Malmsbury.[2] According to this account (recorded in the South English Legendary), Fritheswith flees to Oxford. There she finds a ship sent by God which takes her to Bampton. Meanwhile the King searches for her in Oxford, but the people refuse to tell him where she is. When he has searched the whole town but cannot find her, he becomes blind.[6] In the shorter version, Frithuswith hides in a forest outside Oxford, but when Algar comes to look for her, she sneaks back into the town. The king follows her, but just outside the Oxford city gates he falls off his horse and breaks his neck.[7]

In the longer life, the nuns in Binsey complain of having to fetch water from the distant River Thames, so Frideswide prays to God and a well springs up. The well water has healing properties and many people come to seek it out. This well can still be found today at the Church of St Margaret in Binsey, a few miles upriver from Oxford.

Frithuswith remained abbess of the Oxford monastery until her death in about 727, where she was later buried.

St Frideswide's Priory, a medieval Augustinian house (some of the buildings of which were incorporated into Christ Church, Oxford following the dissolution of the monasteries) is claimed to be the site of her abbey and relics. From early times the abbey appears to have been an important landowner in the area. However, it was destroyed in 1002 during the events of the St. Brice's Day massacre.[2] A shrine was kept at the abbey in Frithuswith's honour; later a monastery was built there for Augustinian canons. The authority on the subject, Dr. John Blair of Queen's College, Oxford, believes that Christ Church Cathedral is built on the site of her Saxon church.

In 1180, the Archbishop of Canterbury translated Frithuswith's remains to a new shrine in the monastery church, an event that was attended by King Henry II of England. The later history of the monastery was chequered, and the shrine was repeatedly vandalised during the Dissolution of the Monasteries and beyond. In 1546 the monastery church became (and still remains) the cathedral church for the diocese of Oxford. Her shrine was reinstated by Queen Mary in 1558, but was later desecrated by James Calfhill, the Calvinist canon of the church, who was intent on suppressing her cult. As a result, Frithuswith's remains were mixed with those of Catherine Dammartin, wife of Peter Martyr Vermigli, and they remain so to this day.[2]

Frithuswith is the patron saint of Oxford. She is also patron saint of Oxford University, which was declared by the Archbishop of Canterbury in 1440. Her feast day is 19 October, the traditional day of her death; the date of her translation is also commemorated on 12 February.[8] In art, she is depicted holding the pastoral staff of an abbess, a fountain springing up near her and an ox at her feet. The fountain probably represents the holy well at Binsey. She appears in medieval stained glass, and in Pre-Raphaelite stained glass by Edward Burne-Jones in Christ Church Cathedral, Oxford, in the chapel where her shrine is also located.