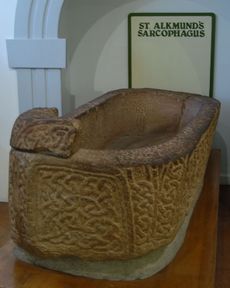 Alcmund of Derby or of Lilleshall, also spelt Ealhmund, Alhmund, Alkmund, or Alchmund (d. c. 800) was son of Alhred of Northumbria. After more than twenty years in exile among the Picts as a result of Northumbrian dynastic struggles, he returned with an army. He was killed in about 800, for which King Eardwulf of Northumbria was held responsible. Whatever the exact circumstances, his death was regarded as a martyrdom, and Alcmund as a saint.[1] 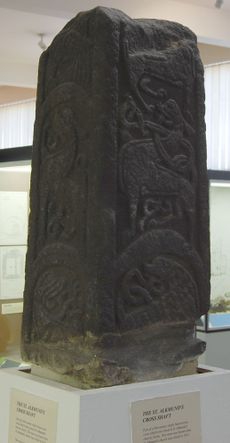 Alcmund was buried at Lilleshall in Shropshire, where miracles were reported at the tomb. Due to Danish raids, his body was translated to Derby. St Alkmund's Church, Derby and the nearby St Alkmund's Church, Duffield in Derbyshire were dedicated to him. When the Derby church was demolished in the 20th century, several earlier churches were revealed, stretching back to the 9th century. Artefacts found included the stone sarcophagus.[3]