From Infogalactic: the planetary knowledge core
Jump to: navigation, search
Not to be confused with Guido Sarducci.

Giosuè Alessandro Giuseppe Carducci (Italian: [dʒozuˈɛ kkarˈduttʃi]; also Giosue Carducci [ˈdʒɔːzu.e karˈduttʃi] in later years;[1] 27 July 1835 – 16 February 1907) was an Italian poet, teacher and Master Mason. He was very influential[2] and was regarded as the official national poet of modern Italy.[3] In 1906 he became the first Italian to receive the Nobel Prize in Literature[4] "not only in consideration of his deep learning and critical research, but above all as a tribute to the creative energy, freshness of style, and lyrical force which characterize his poetic masterpieces".[5]

He was born in Valdicastello (part of Pietrasanta), a small town in the Province of Lucca in the northwest corner of the region of Tuscany. His father, a doctor, was an advocate of the unification of Italy and was involved with the Carbonari. Because of his politics, the family was forced to move several times during Carducci's childhood, eventually settling for a few years in Florence.[6]

From the time he was in college, he was fascinated with the restrained style of Greek and Roman Antiquity, and his mature work reflects a restrained classical style, often using the classical meters of such Latin poets as Horace and Virgil. He translated Book 9 of Homer's Iliad into Italian.

He graduated in 1856 from the Scuola Normale Superiore di Pisa and began teaching school. The following year, he published his first collection of poems, Rime. These were difficult years for Carducci: his father died, and his brother committed suicide.

In 1859, he married Elvira Menicucci, and they had four children. He briefly taught Greek at a high school in Pistoia, and then was appointed Italian professor at the university in Bologna. Here, one of his students was Giovanni Pascoli, who became a poet himself and later succeeded him at the university.
Initiated in 1861 at the regular Scottish Rite Masonic Lodge «Galvani» in Bologna[7] and in 1886 he was designated with the 33th degree by the Italian Great Master Adriano Lemmi, initiated in the Masonic Lodge Propaganda in Rome. Therefore, in 1881 Carducci published his neoclassical poem dedicated to Satan. Carducci was a popular lecturer and a fierce critic of literature and society. He was an atheist,[8] whose political views were vehemently hostile to Christianity generally and the Catholic Church in particular.

I know neither truth of God nor peace with the Vatican or any priests. They are the real and unaltering enemies of Italy.

he said in his later years.[9]

This anti-clerical revolutionary vehemence is prominently showcased in one famous poem, the deliberately blasphemous and provocative "Inno a Satana" (or "Hymn to Satan".) The poem was composed in 1863 as a dinner party toast, published in 1865, then republished in 1869 by Bologna's radical newspaper, Il Popolo, as a provocation timed to coincide with the First Vatican Council, a time when revolutionary fervor directed against the papacy was running high as republicans pressed both politically and militarily for an end of the Vatican’s domination over the papal states.[10] 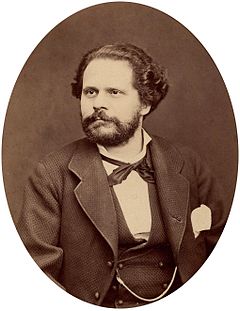 In 1890 he met future writer and poet Annie Vivanti, with whom he started a love affair. Carlo Emilio Gadda reported that

Carducci used to travel with a suitcase in which he kept a huge pair of Annie Vivanti's panties... every once in a while, he opened the suitcase, took out the panties, sniffed them and got intoxicated from them.[11][12]

In 2004, the uncensored letters between her and Carducci were published.[11][13]

He was the first Italian to receive the Nobel Prize in Literature, in 1906. He was also elected a Senator of Italy.[15] Although his reputation rests primarily on his poetry, he also produced a large body of prose works.[16] Indeed, his prose writings, including literary criticism, biographies, speeches and essays, fill some 20 volumes.[17] Carducci was also an excellent translator and translated some of Goethe and Heine into Italian.

The Museum of the Risorgimento, Bologna is housed in the Casa Carducci, the house where he died at the age of 71, and contains an exhibits on the author.