From Infogalactic: the planetary knowledge core
Jump to: navigation, search
For the rugby league footballer of the 1980s and '90s, see Tony Morrison. For the Louisiana politician, see deLesseps Morrison, Jr.

Toni Morrison (born Chloe Ardelia Wofford;[1] February 18, 1931) is an American novelist, editor, and professor. Her novels are known for their epic themes, vivid dialogue, and richly detailed characters. Among her best known novels are The Bluest Eye (1970), Sula (1973), Song of Solomon (1977), and Beloved (1987). She was also commissioned to write the libretto for a new opera, Margaret Garner, first performed in 2005. She won the Pulitzer Prize and the American Book Award in 1988 for Beloved and the Nobel Prize in 1993. On May 29, 2012, she received the Presidential Medal of Freedom. Morrison serves as Professor Emeritus at Princeton University.

Toni Morrison was born in Lorain, Ohio, to Ramah (née Willis) and George Wofford. She is the second of four children in a working-class family.[2] Her parents moved to Ohio to escape southern racism and instilled a sense of heritage through telling traditional African American folktales.[3] She read frequently as a child; among her favorite authors were Jane Austen and Leo Tolstoy.[4] According to a 2012 interview in The Guardian, she became a Catholic at the age of 12 and received the baptismal name "Anthony", which later became the basis for her nickname "Toni".[5]

In 1949 Morrison went to Howard University graduating in 1953 with a B.A. in English; she went on to earn a Master of Arts from Cornell University in 1955. She taught English, first at Texas Southern University in Houston for two years, then at Howard for seven years. She met Harold Morrison, a Jamaican architect, at Howard, whom she married in 1958. The couple had two children and divorced in 1964.[3] After the breakup of her marriage, she began working as an editor in 1965 for a textbook publisher in Syracuse, going on two years later to Random House in New York City, where she became a senior trade-book editor.[6][7] In that capacity, Morrison played a vital role in bringing black literature into the mainstream, editing books by authors such as Henry Dumas,[8] Toni Cade Bambara, Angela Davis, and Gayl Jones.[9]

Morrison began writing fiction as part of an informal group of poets and writers at Howard University who met to discuss their work. She attended one meeting with a short story about a black girl who longed to have blue eyes. She later developed the story as her first novel, The Bluest Eye (1970). She wrote it while raising two children and teaching at Howard.[7]

In 1987 Morrison's novel Beloved became a critical success. When the novel failed to win the National Book Award as well as the National Book Critics Circle Award, 48 black critics and writers[11][12] protested the omission in a statement that was published in The New York Times on January 24, 1988.[7][13][14] Not long afterwards, Beloved won the Pulitzer Prize for fiction[15] and the American Book Award. It also won an Anisfield-Wolf Book Award. That same year, Morrison took a visiting professorship at Bard College.

Beloved was adapted into the 1998 film of the same name starring Oprah Winfrey and Danny Glover. Morrison later used Margaret Garner's life story again in the libretto for a new opera, Margaret Garner, with music by Richard Danielpour. In May 2006, The New York Times Book Review named Beloved the best American novel published in the previous 25 years.

In 1993 Morrison was awarded the Nobel Prize in Literature. Her citation reads: Toni Morrison, "who in novels characterized by visionary force and poetic import, gives life to an essential aspect of American reality." She is currently the last American to have been awarded the honor. Shortly afterward, a fire destroyed her Rockland County, New York home.[2][16]

In 1996 the National Endowment for the Humanities selected Morrison for the Jefferson Lecture, the U.S. federal government's highest honor for achievement in the humanities.[17] Morrison's lecture, entitled "The Future of Time: Literature and Diminished Expectations,"[18] began with the aphorism, "Time, it seems, has no future." She cautioned against the misuse of history to diminish expectations of the future.[19]

Morrison was honored with the 1996 National Book Foundation's Medal of Distinguished Contribution to American Letters, which is awarded to a writer "who has enriched our literary heritage over a life of service, or a corpus of work."[20]

In addition to her novels, Morrison has written books for children with her younger son, Slade Morrison, who worked as a painter and musician. Slade died of pancreatic cancer[22] on December 22, 2010, aged 45.[23] Morrison's novel Home, half-written when Slade died,[22] is dedicated to him.[5][24][25]

Her 11th novel, entitled God Help the Child, was announced for publication in April 2015.[26]

Although her novels typically concentrate on black women, Morrison does not identify her works as feminist. When asked in a 1998 interview "Why distance oneself from feminism?" she replied: "In order to be as free as I possibly can, in my own imagination, I can't take positions that are closed. Everything I've ever done, in the writing world, has been to expand articulation, rather than to close it, to open doors, sometimes, not even closing the book – leaving the endings open for reinterpretation, revisitation, a little ambiguity."[27] She went on to state that she thought it "off-putting to some readers, who may feel that I'm involved in writing some kind of feminist tract. I don't subscribe to patriarchy, and I don't think it should be substituted with matriarchy. I think it's a question of equitable access, and opening doors to all sorts of things."[27] Critics, however, have referred to her body of work as exemplifying characteristics of "postmodern feminism" by "altering Euro-American dichotomies by rewriting a history written by mainstream historians" and by her usage of shifting narration in Beloved and Paradise.[28]

Though based in the Creative Writing Program at Princeton, Morrison did not regularly offer writing workshops to students after the late 1990s, a fact that earned her some criticism. Rather, she has conceived and developed the prestigious Princeton Atelier, a program that brings together talented students with critically acclaimed, world-famous artists. Together the students and the artists produce works of art that are presented to the public after a semester of collaboration. In her position at Princeton, Morrison used her insights to encourage not merely new and emerging writers, but artists working to develop new forms of art through interdisciplinary play and cooperation.

At its 1979 commencement ceremonies, Barnard College awarded her its highest honor, the Barnard Medal of Distinction. Oxford University awarded her an honorary Doctor of Letters degree in June 2005.

In November 2006, Morrison visited the Louvre Museum in Paris as the second in its "Grand Invité" program to guest-curate a month-long series of events across the arts on the theme of "The Foreigner's Home." Inspired by her curatorship, Morrison returned to Princeton in Fall 2008 to lead a small seminar, also entitled "The Foreigner's Home." Also that year, The New York Times Book Review named Beloved the best novel of the past 25 years. She continued to explore new art forms, writing the libretto for Margaret Garner, an American opera that explores the tragedy of slavery through the true life story of one woman's experiences. The opera debuted at the New York City Opera in 2007.[6]

In May 2010, Morrison appeared at PEN World Voices for a conversation with Marlene van Niekerk and Kwame Anthony Appiah about South African literature, and specifically, van Niekerk's novel Agaat.[29]

In May 2011, Morrison received an Honorable Doctor of Letters Degree from Rutgers University during commencement where she delivered a speech of the "pursuit of life, liberty, meaningfulness, integrity, and truth."

In March 2012, Morrison established a residency at Oberlin College.In addition to Home, Morrison also debuted another work in 2012: She worked with opera director Peter Sellars and songwriter Rokia Traoré on a new production inspired by William Shakespeare's Othello. The trio focused on the relationship between Othello's wife Desdemona and her African nurse, Barbary, in Desdemona, which premiered in London in the summer of 2012.[6][30]

She is currently a member of the editorial board of The Nation magazine. 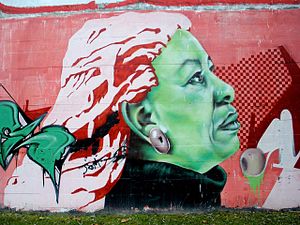 In writing about the 1998 impeachment of Bill Clinton, Morrison wrote that, since Whitewater, Bill Clinton had been mistreated because of his "Blackness":

Years ago, in the middle of the Whitewater investigation, one heard the first murmurs: white skin notwithstanding, this is our first black President. Blacker than any actual black person who could ever be elected in our children's lifetime. After all, Clinton displays almost every trope of blackness: single-parent household, born poor, working-class, saxophone-playing, McDonald's-and-junk-food-loving boy from Arkansas.[31]

The phrase "our first Black president" was adopted as a positive by Bill Clinton supporters. When the Congressional Black Caucus honored the former president at its dinner in Washington D.C. on September 29, 2001, for instance, Rep. Eddie Bernice Johnson (D-TX), the chair, told the audience that Clinton "took so many initiatives he made us think for a while we had elected the first black president."[32]

In the context of the 2008 Democratic Primary campaign, Morrison stated to Time magazine: "People misunderstood that phrase. I was deploring the way in which President Clinton was being treated, vis-à-vis the sex scandal that was surrounding him. I said he was being treated like a black on the street, already guilty, already a perp. I have no idea what his real instincts are, in terms of race."[33] In the Democratic primary contest for the 2008 presidential race, Morrison endorsed Senator Barack Obama over Senator Hillary Clinton,[34] though expressing admiration and respect for the latter.[35]

In April 2015, speaking of the deaths of Michael Brown, Eric Garner, and Walter Scott—three unarmed black men killed by white police officers—Morrison said "People keep saying, 'We need to have a conversation about race.' This is the conversation. I want to see a cop shoot a white unarmed teenager in the back. And I want to see a white man convicted for raping a black woman. Then when you ask me, 'Is it over?', I will say yes."[36]

Toni Morrison was the subject of a film entitled Imagine – Toni Morrison Remembers, directed by Jill Nicholls and shown on BBC1 television on July 15, 2015, in which Morrison talked to Alan Yentob about her life and work.[37][38]

Morrison's papers are part of the permanent library collections of Princeton University.[39] Morrison's decision to add her papers to Princeton instead of her alma mater Howard University faced many comments from the Historical Black College and University community. Vice-President of Content with HBCU Buzz Inc., Robert K. Hoggard wrote in his article "Toni Morrison's Papers Will Go to Princeton? Not Howard": "For far too long, White America has found a way to miss-tell our story. Because of this, it's more important now than ever to unapologetically support our own Black institutions.... Public White institutions do not need our support, they will thrive without. If we are courageous enough to support our own institutions the sky is the limit for what they can continue to do across America."[40]