From Infogalactic: the planetary knowledge core
(Redirected from Guadalajara, Spain)
Jump to: navigation, search
For other uses, see Guadalajara (disambiguation).

Guadalajara (/ˌɡwɑːdələˈhɑːrə/; Spanish pronunciation: [ɡwaðalaˈxaɾa][1]) is a city and municipality in the autonomous community of Castile–La Mancha, Spain, and in the natural region of La Alcarria. It is the capital of the province of Guadalajara. It is located roughly 60 kilometres (37 miles) northeast of Madrid on the Henares River, and has a population of 84,803 (2012). 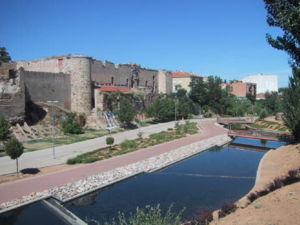 Remains of the "Alcázar of Guadalajara", built in the 9th century 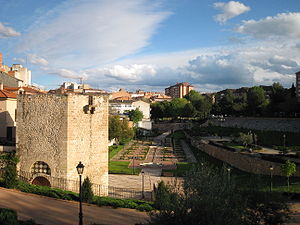 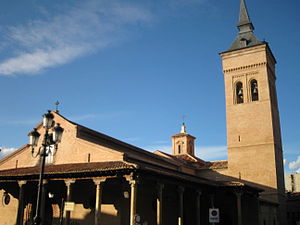 A Roman town called Arriaca, possibly founded by a pre-Roman culture, is known to have been located in that region. There is however no archeological proof of its existence, only references in texts such as the Ruta Antonina, which describe it as being in the hands of the Carpetani[2] when encountered by the Romans. The city, as Caracca,[3] was incorporated into the Roman province of Hispania Tarraconensis. The city was on the high road from Emerita (modern Mérida) to Caesaraugusta (modern Zaragoza), 22 M. P. northeast of Complutum (modern Alcalá de Henares).

The town of Guadalajara was founded by the Andalusians in the 8th century. They named it Wādī-al-Ḥajāra (Arabic: وَادِي ﭐلحَجَارَۃ‎‎), meaning "Valley of Stones"; in theory the literal translation of the Iberian name (Arriaca), meaning "Stony River".

The history of the town during the Al-Andalus period was significant. They built monuments including the Moorish Bridge over the Henares River, the now ruined old Alcázar (Arabic for "palace"), and a mosque which later became the former Cathedral of St. Mary.

In 1085, Guadalajara was taken by the Christian forces of Alfonso VI (king of Leon and Castile). The chronicles say that the Christian army was led by Alvar Fanez de Minaya, one of the lieutenants (and according to the legend, nephew) of El Cid. From 1085 until the Battle of Las Navas de Tolosa in 1212, the city suffered wars against the Almoravid and the Almohad Empires. In spite of the wars, the new Christian population could definitely settle down in the area thanks to the repopulation with people from the North (Castilians from the mountains and Merindades, Basques and Navarreses mainly) who received their first fuero in 1133 from Alfonso VII. In 1219, the king Fernando III gave a new fuero to the city (the one known as Fuero Largo or Big Fuero). During the reign of Alfonso X of Castile, the protection of the king allowed the city to develop its economy by protecting merchants and allowing markets.

During the 14th century, the Mendoza family was prominent in Guadalajara. This family included Íñigo López de Mendoza, also known as Marqués de Santillana (1398–1458), and Pedro González de Mendoza (1428–1495), Great Cardinal of Spain and adviser of the Catholic Monarchs. The Mendoza family held the title of Dukes and Duchesses of El Infantado from 1475. In 1460, King Henry IV gave Guadalajara the title of 'City' and other privileges like the Cortes. Guadalajara was the birthplace of conquistador Nuño de Guzmán, who commissioned in 1542 the foundation of Guadalajara, Mexico.

During the War of the Spanish Succession, Guadalajara was sacked. King Philip V ordered the establishment of the Real Fábrica de Paños (Royal Factory of Clothes) which was situated in the Alcazar till the early 19th century.

In this period, the Mendoza Family ordered the building of El Palacio del Infantado as their main residence. It was completed in the early 1480s and it is considered by many the oldest surviving building built in a pure Renaissance style outside Italy. 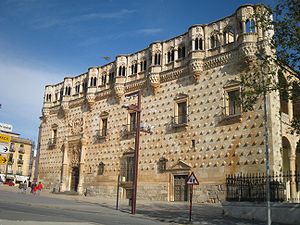 The 19th century started with two major setbacks: the damages caused by the Peninsular War (1808–1814) and the closing of the Real Fábrica de Paños in 1822. In 1808, Guadalajara was taken by the French Army led by General Hugo and the city was destroyed.

In 1840 Guadalajara was established as capital of the province with the same name by the Plan de Burgos. The Academy of Military Engineers was brought to the city. The development during the second half of the 19th century till the first quarter of the 20th century was slow and centred on the developing of the administration without any special interest on industrial development.

Guadalajara was the scene of much action during the Spanish Civil War (1936–1939).

On 24 July 1936, during the counter-revolution phase after the revolt of 19 July, the Communist-led militia murdered three Carmelite nuns in Guadalajara after they refused to renounce their faith. They were Sr. Maria of the Angels of St. Joseph (born Marciana Valtierra Tordesillas, 31 years old) Sr. Maria Pilar of St. Francis Borgia (born Jacoba Martinez Garcia, 58), and Sr. Teresa of the Child Jesus (born Eusebia Garcia y Garcia, 27). They were beatified by Pope John Paul II on 29 March 1987.[4]

On 8 March 1937, the four divisions of the Italian Corpo Truppe Voluntarie (CTV), attacked Republican positions 16 kilometres (10 mi) outside Guadalajara as a supporting diversionary attack supporting the Nationalist Jarama Offensive launched at the beginning of February. After four days of slow, cautious advance during rainy weather, the tanks started attacking down substantial hard paved roads and outran their air and anti-aircraft artillery support. Shortly thereafter, Republican aviation assets airborne in newly cleared skies found the tanks and infantry in a traffic jam on the main road heading into Guadalajara.[5] The Republican aircraft proceeded to attack and destroy all the vehicles in the mechanized spearhead. The CTV was thrown back with casualties in the thousands. Ernest Hemingway and other war correspondents labeled the attack, "Italian débâcle at Guadalajara." Republican forces enjoyed an increase in recruitment as a result of the victory.

This defeat at Guadalajara had two long-standing effects. First, the Italian Army of the Mussolini dictatorship acquired a reputation for incompetence that never left it before the armistice of 1943. Second, some observing nations adopted an armored doctrine that ruled out tanks operating as an independent force, but emphasized tying them tightly to large infantry formations.[6]

The Civil War and the heavy fighting around the city caused significant damage. After two decades of slow rebuilding, Guadalajara was included in 1959 in the development plans addressing the congestion of Madrid's industrial estates (El Plan de Descongestión Industrial de Madrid en Castilla-La Mancha). These plans attempted to move industrial and accompanying residential growth to the periphery, resulting in increased industry presence in Guadalajara. Since then, Guadalajara has been one of the cities in Spain with greatest relative growth.

The José Cabrera Nuclear Power Station (better known as Zorita) was the first nuclear generator in Spain, and constructed within the area, situated beside the river Tajo . The installation was run by Unión Fenosa, and the site is now owned by its successor Gas Natural.The government of Spain closed its operations via a resolution of 20 April 2006,[7] and it was subsequently disconnected from the electrical grid.[8]

Nowadays, Guadalajara is involved in urban development plans that are quickly increasing the population of the city. New districts like Aguas Vivas (Live Waters) have recently been inaugurated.

Ciudad Valdeluz was planned to increase the number of inhabitants of Guadalajara by 30,000, creating a whole brand new city around the AVE Station (Spanish High-Speed Trains). Unfortunately the company investing in the construction of Ciudad Valdeluz went bankrupt. Less than 500 inhabitants decided to occupy their flats and the remaining infrastructure is currently in slow degradation. The AVE trains are used by only 60 passengers a day.[9]

The recent town-plannings have dramatically increased the cost of the new houses, changing in the last 10 years of being one of the cheapest provinces in Spain for house-buying to be the 3rd province in Spain with most expensive square meter.

Since the 2003 local election, the Town Hall is controlled by a coalition made up of Spanish Socialist Workers' Party (PSOE) members and also one IU town councilor. J. Alique (PSOE) has held the post of Mayor since then. Following the 2007 local elections Antonio Román (People's Party) replaced Alique in the mayoralty.

The bridge across the Henares river is Arab but built on Roman foundations. It has several historic buildings such as the Palacio del Infantado, as well as many churches, such as the church of San Ginés. Although Guadalajara is the biggest city in its diocese, the cathedral is located in the nearby town of Sigüenza. However, in Guadalajara, there is a "co-cathedral": the church of Saint Mary, in Mudejar style. Very close to this church, is placed the chapel known as "Capilla de Luis de Lucena", which has several fresco paintings on its walls and ceiling.

Architecture in the districts 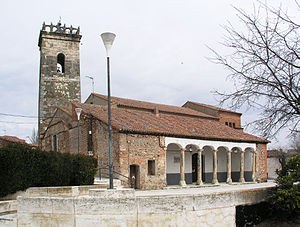 Church of Asunción in Usanos example of religious and Romanesque architecture in Guadalajara.

The districts of Iriépal, Taracena, Usanos and Valdenoches are small agricultural districts, primarily dependent on the economic activity of Guadalajara and with little historical architecture, usually just a modest medieval or modern church. Thus, in Iriépal there is the Concepción church, constructed in the 16th century, which is known for its Mudejar tower. In Taracena there is the 17th century Church of the Immaculate, in a very simple Renaissance style. In Usanos, there is the 13th century Romanesque church of the Assumption, considerably remodeled in later periods and which features a crenellated tower.

Other types of monuments that are also noteworthy are the Iriépal laundry, work of 1910 in historicist style with funding from the Jose Santa María de Hita Foundation, and Iriépal (1858) and Valdenoches (1656) funds.

Throughout all the villages there are examples of Castilian mansions, quite modest compared to those in the cities. Of note also is Villaflores, a farming village built in 1887, designed by Ricardo Velázquez Bosco and commissioned to Maria Diega Desmaissières. 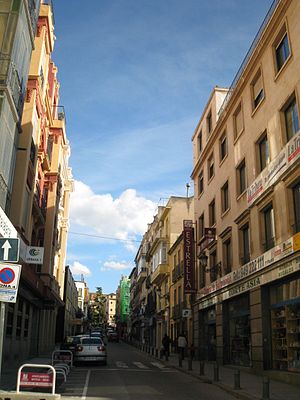 A street of Guadalajara

The Mexican city of Guadalajara, Jalisco, was founded by Nuño Beltrán de Guzmán, a native of the Spanish Guadalajara.

The Coat of Arms of Guadalajara represents Alvar Fanez de Minaya entering in the town at night during the conquest.

Distinguished people from or related to the town were: 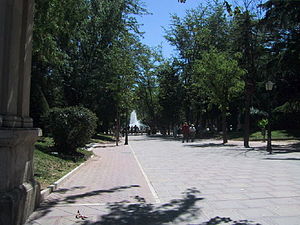 Guadalajara is twinned with:

Guadalajara enjoys a Mediterranean climate however, during winter months, cold temperatures often prevail. This can be accountable due to its inland location and high elevation meaning a less pronounced moderated influence from the sea.