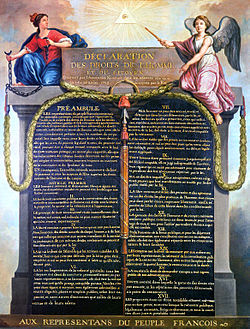 The preamble of the Constitution of the French Fifth Republic, founded in 1958, recalls the 1789 Declaration of the Rights of Man and of the Citizen. France has also ratified the 1948 Universal Declaration of Human Rights, as well as the European Convention on Human Rights 1960 and the Charter of Fundamental Rights of the European Union (2000). All these international law instruments takes precedent on national legislation. However, human rights abuses take place nevertheless. The most frequent cases are of police abuse, while France has also been condemned, both by French citizens and institutions and also for detention conditions in the penitentiary system. The state of detention centres for unauthorized migrants who have received an order of deportation has also been criticized.[citation needed]

During the French Revolution, deputies from the Third Estate drafted the Declaration of the Rights of Man and of the Citizen, voted by the General Estates on 26 August 1789. Inspired by the philosophy of the Enlightenment and by the 1776 United States Declaration of Independence – Lafayette participated in the drafting of both – in that it proclaims the "inalienable rights of Man," and is protected by a "Supreme Being," it mainly granted to the people the right of freedom of expression, of freedom of thought, freedom of association, liberty, security and the protection of private property. France signed and ratified the Universal Declaration of Human Rights in 1948 as well as all Geneva Conventions. 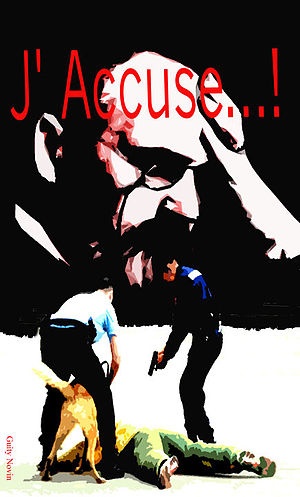 In 2010 the French government launched a programme of forced deportation of the Roma. These deportations have been heavily criticised by many human rights and international political organisations.[1] The Council of Europe has condemned the expulsions, calling them "contrary to human dignity".[2][3] Those who accepted to leave France received 300 euros per adult and 100 euros per child under the condition that they sign a declaration stating they will not try to come back to France.[4] The French Government had for goal to deport 30,000 Roma in 2011.[5]

In conventional terms, France does not have censorship laws. Historically, before its repeal under François Mitterrand in the early 1980s, the ORTF had a significant influence on the mass media. The CSA that has since replaced it is concerned with the respect of French law in the media, in particular the 1990 Gayssot Act which prohibits racist and/or religious hate speech, and time period allocated to each political party during pre-electoral periods. Furthermore, other laws prohibit homophobic hate speech, and a 1970 law prohibits the advocacy of illegal drugs.

In 2004, the Inspector General of the National Police received 469 registered complaints about illegitimate police violence during the first 11 months of the year, down from 500 during the same period in 2003. There were 59 confirmed cases of police violence, compared to 65 in the previous year. In April 2004, the ECHR condemned the Government for "inhumane and degrading treatments" in the 1997 case of a teenager beaten while in police custody. The court ordered the Government to pay Giovanni Rivas $20,500 (15,000 euros) in damages and $13,500 (10,000 euros) in court costs.[6] The head of the police station in Saint-Denis, near Paris, was forced to resign after allegations of rape and other violations committed by the police force under his command. Nine investigations concerning police abuse in this police station were done in 2005 by the IGS inspection of police.[7][8]

The “idéal républicain” (republican ideal) intends to achieve equality in rights between French citizens. To this end, in the national census, the collection of statistics regarding ethnicity or religion is forbidden. This has led to some debate over the decline of indigenous minority languages and identity in the French Republic.

According to the Direction centrale des renseignements généraux (Central Directorate of General Intelligence), the former intelligence service of the French police, in 2004 there were 1513 explicitly racist or antisemitic incidents in France, including 361 acts of violence. Antisemitic incidents were the most numerous, accounting for 950 of the incidents, including 199 violent acts.[9] Anti-Maghreb incidents accounted for 563 incidents, including 162 violent acts. The Paris region was the most affected. 2007 saw an overall decrease of 9% in such incidents.[10]

Before the Revolution, Standard French (a dialect of Langue d'Oïl) was spoken in only slightly more than half of the territory of France. In western Brittany, southern Flanders, Alsace-Lorraine and most of the southern half of France (Occitania), local people had their own distinct cultures. Breton is a Celtic language akin to Welsh, Alsace-Lorraine was part of the German-speaking world, while Occitan is a separate Romance language. With the centralization of the Republic that accompanied the Revolution, the state imposed the teaching of Standard French in all schools and universities, and the exclusive use of French in government institutions.

Promotion of a local language or culture has finally been allowed, but under severe restrictions which effectively make it difficult to publish, organize classes, or media broadcasts.

Freedom of religion in France is guaranteed by the constitutional rights set forth in the 1789 Declaration of the Rights of Man and of the Citizen.

The Neuwirth law legalized birth control methods on 28 December 1967. Youths were given anonymous and free access to them in 1974.

Abortion was legalized in the first 12 weeks of pregnancy by the Veil law on 17 January 1975.

Homosexuality was decriminalized during the Revolution by the law of the 25 September – 6 October 1791.

On 6 August 1942 Vichy government introduced a discriminative law in penal code: article 334 (moved to article 331 on 8 February 1945 by the Provisional Government of the French Republic) increased age of consent to 21 for homosexual relations. This law remained valid until 4 August 1982.

A bill granting same-sex couples the right to marry and jointly adopt children was adopted by the National Assembly on May 18, 2013 by Law 2013-404

Since July 1987, all companies with at least 20 workers have to employ at least 6% handicapped people.[citation needed]

There has been a growing awareness of human trafficking as a human rights issue in Europe (see main article: trafficking in human beings). The end of communism and collapse of the Soviet Union and Yugoslavia has contributed to an increase in human trafficking, with the majority of victims being women forced into prostitution.[12][13] France is a transit and destination country for persons, primarily women, trafficked mainly from Central and Eastern Europe and from Africa for the purpose of labour exploitation and sexual exploitation. The Government of France fully complies with the minimum standards for the elimination of trafficking. The French government was called on to make sure that implementation of the 2003 Domestic Security Law did not result in re-victimizing trafficking victims by improving the screening of foreign prostitutes so that trafficking victims are properly identified and protected from their traffickers.[14]

The collection, storage, and use of personal data is regulated by the CNIL whose mission is to enforce compliance with the data privacy law.