From Infogalactic: the planetary knowledge core
Jump to: navigation, search
Not to be confused with Ministry of Public Security of the People's Republic of China.

Article 4 of the Criminal Procedure Law gives the MSS the same authority to arrest or detain people as regular police for crimes involving state security with identical supervision by the procuratorates and the courts.[1]

The network of state security bureaus and the Ministry of State Security should not be confused with the separate but parallel network of public security bureaus, administered at the national level by the Ministry of Public Security of the People's Republic of China, which is responsible for ordinary (non-state security) policing and related administrative matters. The two systems are administratively separate, although at local levels they co-operate to a large extent and often share resources. 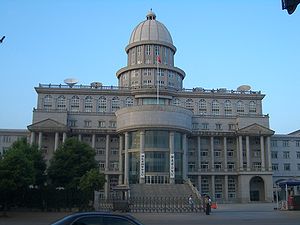 The precursor of the modern MSS was the Central Department of Social Affairs (CDSA), the primary intelligence organ of the Communist Party of China (CPC) before its accession to power in 1949. The CDSA operated from the communist base area of Yan'an in Shaanxi Province in northern China during the 1937–45 Second Sino-Japanese War. The CDSA provided the CPC with assessments of the world situation based on news reports and furnished the Communists with intelligence that proved important in the 1946–49 Chinese Civil War against the Nationalist forces.

The CDSA was thoroughly reorganized in the summer of 1949.[2] It ceased to exist in name, and some of its most prominent officers were transferred to senior positions in the new Ministry of Public Security of the CCP Central Revolutionary Military Affairs Commission (after the founding of the People's Republic of China renamed the Ministry of Public Security of the Central People's Government). After an extended transition during which segments of the former CDSA came within the purview of the People's Liberation Army, it was fully re-established as an organ directly under the Communist Party Central Committee in 1955, now with the new name Central Investigation Department (CID).[3] The MSS was established in 1983 as the result of the merger of the CID and the counter-intelligence elements of the Ministry of Public Security of the People's Republic of China. One of its longest-serving chiefs was Jia Chunwang, a native of Beijing and a 1964 graduate of Tsinghua University, who is reportedly an admirer of the U.S. Central Intelligence Agency (CIA). He served as Minister of State Security from 1985 until March 1998, when the MSS underwent an overhaul and Xu Yongyue was appointed the new head of the organization. Jia was then appointed to the Minister of Public Security post, after a decade of distinguished service as head of the MSS.

Chinese intelligence agents, probably under the control of the MSS, have achieved success in penetrating the U.S. Intelligence Community in the past. In the 1980s, Larry Wu-Tai Chin (Jin Wudai), a translator for the CIA's Foreign Broadcast Information Service, was arrested and charged with espionage in the service of the PRC. He had been recruited in 1944 while stationed in China as a U.S. Army officer and went undetected for four decades. More recently, in 2003, Chinese-American Federal Bureau of Investigation source and Republican Party fundraiser Katrina Leung was arrested and accused of being a double agent for both the FBI and the Chinese government, although she was acquitted of charges of copying classified information, and convicted only of tax charges and of lying to the FBI.

In March 2009 former MSS operative Li Fengzhi told the Washington Times in an interview that the MSS was engaged in counterintelligence, the collection of secrets and technology from other countries, and repressing internal dissent within China. The internal repression, according to Li, includes efforts against nonofficial Christian churches and the outlawed Falun Gong religious group, plus censoring the Internet to prevent China's population from knowing what is going on outside the country. Li emphasized that MSS's most important mission is, "to control the Chinese people to maintain the rule of the Communist Party".[4]

According to Liu Fuzhi, Secretary-General of the Commission for Politics and Law under the Central Committee of the Communist Party of China and Minister of Public Security, the mission of the MSS is to ensure "the security of the state through effective measures against enemy agents, spies, and counter-revolutionary activities designed to sabotage or overthrow China's socialist system."[5] One of the primary missions of the MSS is reportedly to gather foreign intelligence from targets in various countries overseas. Many MSS agents are said to have operated in the Greater China region (Hong Kong, Macau, and Taiwan) and to have integrated themselves into the world's numerous overseas Chinese communities. At one point, nearly 120 agents who had been operating under non-official cover in the U.S., Canada, Western and Northern Europe, and Japan as businessmen, bankers, scholars, and journalists were recalled to China.[citation needed]

Agency heads are known as Minister of State Security (MSS), reporting directly to the State Council.[6]

The MSS is divided into bureaus, which at one point were:

MSS personnel are trained at the University of International Relations (guoji guanxi xueyuan).[7][8]