From Infogalactic: the planetary knowledge core
Jump to: navigation, search
This article is about Achaean Greek. For the later dialect used in Achaea and the Peloponnese, see Achaean Doric Greek.

Mycenaean Greek is the most ancient attested form of the written Greek language, used on the Greek mainland, Crete and Cyprus in the 16th to 12th centuries BC, before the hypothesised Dorian invasion which was often cited as the terminus post quem for the coming of the Greek language to Greece. The language is preserved in inscriptions in Linear B, a script first attested on Crete before the 14th century BC. Most instances of these inscriptions are on clay tablets found in Knossos in central Crete, and in Pylos in the southwest of the Peloponnese. Other tablets have been found at Mycenae itself, Tiryns and Thebes and at Chania in Western Crete.[2] The language is named after Mycenae, one of the major centres of Mycenaean Greece.

The tablets remained long undeciphered, and many languages were suggested for them, until Michael Ventris deciphered the script in 1952 and by a preponderance of evidence demonstrated the language to be an early form of Greek.

The texts on the tablets are mostly lists and inventories. No prose narrative survives, much less myth or poetry. Still, much may be glimpsed from these records about the people who produced them and about Mycenaean Greece, the period before the so-called Greek Dark Ages. 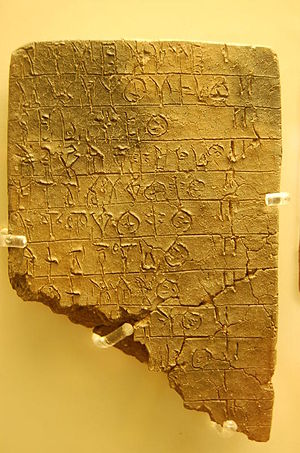 Inscription of Mycenaean Greek written in Linear B. Archaeological Museum of Mycenae.

The Mycenaean language is preserved in Linear B writing, which consists of about 200 syllabic signs and logograms. Since Linear B was derived from Linear A, the script of an undeciphered Minoan language probably unrelated to Greek, it does not reflect fully the phonetics of Mycenaean. In essence, a limited number of syllabic signs must represent a much greater number of produced syllables, better represented phonetically by the letters of an alphabet. Orthographic simplifications therefore had to be made. The main ones are:[3]

In addition to these spelling rules, signs are not polyphonic (more than one sound) but sometimes they are homophonic (a sound can be represented by more than one sign), which are not "true homophones" but are "overlapping values."[5] Long words may omit a middle or final sign.

For more details on this topic, see Linear B.

One archaic feature is the set of labiovelar consonants [ɡʷ, kʷ, kʷʰ], written ⟨q⟩. They split into /b, p, pʰ/, /d, t, tʰ/, or /g k kʰ/ in Ancient Greek depending on context and dialect.

Another set is the semivowels /j w/ and the glottal fricative /h/ between vowels. All of these were lost in standard Attic Greek, but /w/ was preserved in some Greek dialects and written as digamma ⟨ϝ⟩ or beta ⟨β⟩.

It is unclear how the sound transcribed as ⟨z⟩ was pronounced. It may have been a voiced or voiceless affricate /dz/ or /ts/ (marked with asterisks in the table above). It derives from [kʲ], [ɡʲ], [dʲ] and some initial [j], and was written as ζ in the Greek alphabet. In Attic, it was pronounced [zd] in many cases, and as [z] in Modern Greek.

There were at least five vowels /a e i o u/, which could be both short and long.

As noted above, the syllabic Linear B script used to record Mycenaean is extremely defective, distinguishing only the semivowels ⟨j w⟩; the sonorants ⟨m n r⟩; the sibilant ⟨s⟩; the stops ⟨p t d k q z⟩; and (marginally) ⟨h⟩. Voiced, voiceless and aspirate occlusives are all written with the same symbols, except that ⟨d⟩ stands for /d/ and ⟨t⟩ for both /t/ and /tʰ/). Both /r/ and /l/ are written ⟨r⟩. The sound /h/ is written only when /a/ follows; otherwise it is unwritten.

Vowel and consonant length is not notated, and in most circumstances the script is unable to notate a consonant not followed by a vowel; in such cases, either an extra vowel is inserted (often echoing the quality of the following vowel), or the consonant is omitted. (See above for more details.) This means that determining the actual pronunciation of written words is often difficult, and makes use of a combination of the PIE etymology of a word, its form in later Greek, and variations in spelling. Even so, for some words the pronunciation is not known exactly, especially when the meaning is unclear from context or the word has no descendants in the later dialects.

Also unlike later varieties of Ancient Greek, the verbal augment is almost entirely absent from Mycenaean Greek, with only one known exception, 𐀀𐀟𐀈𐀐, a-pe-do-ke (PY Fr 1184), although even this appears elsewhere without the augment, as 𐀀𐀢𐀈𐀐, a-pu-do-ke (KN Od 681). Omission of the augment is also seen in Homer, where it is sometimes included and sometimes not.[7]

Mycenaean has already undergone the following sound changes peculiar to the Greek language and therefore is considered to be Greek.[8]

The corpus of Mycenaean-era Greek writing consists of some 6,000 tablets and potsherds in Linear B, from LMII to LHIIIB. No Linear B monuments or non-Linear B transliterations have yet been found.

If it is genuine, the Kafkania pebble, dated to the 17th century BC, would be the oldest known Mycenean inscription, and hence the earliest preserved testimony of the Greek language, but it is likely a hoax.[9]

Survival of the Mycenaean Greek

Ancient Pamphylian also shows some similarity to Arcadocypriot and to Mycenaean Greek.

While the Mycenaean dialect is relatively uniform at all the centres where it is found, there are also a few traces of dialectal variants. The following examples can be given,

Based on such variations, fr:Ernst Risch (1966) postulated the existence of some dialects within Linear B.[10] The "Normal Mycenaean" would have been the standardized language of the tablets, while the "Special Mycenaean" represented some local vernacular dialect (or dialects) of the particular scribes who were producing the tablets.[11]

Thus, "a particular scribe, distinguished by his handwriting, reverted to the dialect of his everyday speech",[11] and used the variant forms, such as the examples above.

It follows from this that, after the collapse of Mycenaean Greece – while the standardized Mycenaean language was no longer used – the particular local dialects reflecting local vernacular speech would have continued, eventually producing the various Greek dialects of the historic period.[11]

Such theories are also connected with the idea that the Mycenaean language constituted a type of a special koine representing the official language of the palace records and the ruling aristocracy. When this 'Mycenaean linguistic koine' fell into disuse after the fall of the palaces, because the script was no longer used, the underlying dialects would have continued to develop in their own ways. This view was formulated by Antonin Bartonek.[12][13] Other linguists like L.R. Palmer (1980),[14] and de:Yves Duhoux (1985)[15] also support this view of the 'Mycenaean linguistic koine'.[16] (The term ‘Mycenaean koine’ is also used by archaeologists to refer to the material culture of the region.)