Dagger with the names Nebkhepeshre Apepi.

Apepi (also Ipepi; Egyptian language ipp(i)) or Apophis (Greek: Ἄποφις; regnal names Neb-khepesh-Re, A-qenen-Re and A-user-Re) was a ruler of Lower Egypt during the fifteenth dynasty and the end of the Second Intermediate Period that was dominated by this foreign dynasty of rulers called the Hyksos. According to the Turin Canon of Kings, he ruled over the northern portion of Egypt for forty years,[2] and would have ruled during the early half of the 16th century BC if he outlived his southern rival, Kamose, but not Ahmose I.[3] Although his reign only entailed northern Egypt, Apepi was dominant over most of Egypt during the early portion of his reign, and traded peacefully with the native, Theban Seventeenth dynasty to the south.[3]

While he might have exerted suzerainty over Upper Egypt during the beginning of his reign, the seventeenth dynasty eventually assumed control over this region, and the Hyksos were driven out of Egypt no more than fifteen years after his death.[4]

Neb-khepesh-Re (nb ḫpš rˁ), A-qenen-Re (ˁ3 ḳn n rˁ) and A-user-Re (ˁ3 wsr rˁ) are three praenomina or throne names used by this same ruler during various parts of his reign.[5] While some Egyptologists once believed that there were two separate kings who bore the name Apepi, namely Auserre Apepi and Aqenenre Apepi, it is now recognized that Khamudi succeeded Apepi I at Avaris and that there was only one king named Apepi or Apophis.[6][7] Nebkhepeshre or "Re is the Lord of Strength" was Apepi's first prenomen; towards the middle of his reign, this Hyksos ruler adopted a new prenomen, Aqenenre, which translates as "The strength of Re is great."[8] In the final decade or so of his reign, Apepi chose Auserre as his last prenomen. While the prenomen was altered, there is no difference in the translation of both Aqenenre and Auserre. His Horus name Shetep-tawy is attested only twice (once together with A-qenen-Re). It appears on an offering table[9] and on blocks found at Bubastis.[10]

Rather than building his own monuments, Apepi generally usurped the monuments of previous pharaohs by inscribing his own name over two sphinxes of Amenemhat II and two statues of Imyremeshaw.[11] Apepi is thought to have usurped the throne of northern Egypt after the death of his predecessor, Khyan, since the latter had designated his son, Yanassi, to be his successor on the throne as a foreign ruler.[12] He was succeeded by Khamudi, the last Hyksos ruler. Ahmose I, who drove out the Hyksos kings from Egypt, established the 18th Dynasty.[11]

In the Ramesside era, he is recorded as worshiping Seth in a monolatric way: "[He] chose for his Lord the god Seth. He didn't worship any other deity in the whole land except Seth." Jan Assmann argues that because the Ancient Egyptians could never conceive of a "lonely" god lacking personality, Seth the desert god, who was worshiped exclusively, represented a manifestation of evil.[13]

There is some discussion in Egyptology concerning whether Apepi also ruled Upper Egypt. There are indeed several objects with the king's name most likely coming from Thebes and Upper Egypt. These include a dagger with the name of the king bought on the art market in Luxor. There is an axe of unknown provenance where the king is called beloved of Sobek, lord of Sumenu. Sumenu is nowadays identified with Mahamid Qibli, about 24 kilometers south of Thebes and there is a fragment of a stone vessel found in a Theban tomb. For all these objects it is arguable that they were traded to Upper Egypt.[14] More problematic is a block with the king's name found at Gebelein. The block had been taken as evidence for building activity of the king in Upper Egypt and, hence, seen as proof that the Hyksos also ruled in Upper Egypt. However, the block is not very big and many scholars argue today, that it might have reached Gebelein after the looting of the Hyksos capital and is no proof of a Hyksos reign in Upper Egypt.[15] 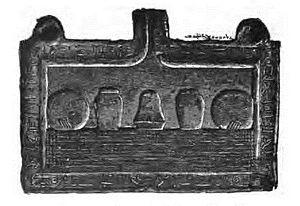 Two sisters are known: Tani and Ziwat. Tani is mentioned on a door of a shrine in Avaris and on the stand of an offering table (Berlin 22487). She was the sister of the king. Ziwat is mentioned on a bowl found in Spain.[16]

A Prince Apepi, named on a seal (now in Berlin) is likely to have been his son. Apepi also had a daughter, named Herit: a vase belonging to her was found in a tomb at Thebes, sometimes regarded as the one of king Amenhotep I,[17] which might indicate that at some point his daughter was married to a Theban king.[3] The vase, however, could have been an item which was looted from Avaris after the eventual victory over the Hyksos by Ahmose I.