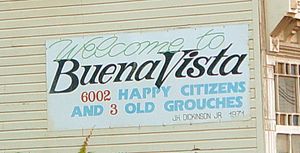 Buena Vista (/ˌbjuːnəˈvɪstə/ BEW-nə-VIS-tə) is an independent city located in the Blue Ridge Mountains region of Virginia in the United States. As of the 2010 census, the population was 6,650.[3] The Bureau of Economic Analysis combines the independent cities of Buena Vista and Lexington, along with surrounding Rockbridge County, for statistical purposes.

Founded by Benjamin C. Moomaw in the late 1800s, the town consisted only of a simple tannery at the intersection of two railroads and a canal. The Richmond and Alleghany Railroad and the Shenandoah Valley Railroad,[7] stood alongside the James River Canal that had been used to transport materials from the Atlantic ports of Virginia to Lexington since the 18th century,[8] but by the founding of the city had been converted for the distribution of water power.[7] After opening the tannery, Moomaw opened a pulp mill and a canning factory. In 1882 Appold & Sons Tannery opened, and the first public school opened in 1885.[5]

In 1893, the town was described as "one of the many new towns that seem to have sprung up as if by magic in some parts of Virginia." Previous to 1889 none of the 600 dwellings, churches, stores, hotels and other buildings in the town had been built "but where are streets and all that goes to make a booming city the reapers that year gathered a luxuriant crop of wheat."[7] In December 1888, Moomaw wrote the Buena Vista Prospectus to organize a town and began selling stock. "It took only 30 days for all the stock to be sold for a total of $400,000. With the sale completed, it was time to lay out the town and begin recruiting people and industries."[5] On February 22, 1889, a large deposit of iron ore was reportedly discovered that resulted in a boom of economic activity that lasted until March 4, 1892.[5] In just those three years the community grew extensively, adding a new brick school house, an opera house, two churches, a luxury hotel, a new Masonic Lodge (Buena Vista Lodge No. 186),[9] a paper and pulp mill, a saddle factory, a cashmere mill, two brick and clay works, a wagon works, two banks, an egg crate factory, an electric light plant, a furniture and chair factory, a boiler factory, an iron furnace and steel factory, a glass foundry, and several wood and lumber establishments.[7]

Buena Vista is situated on the east side of the Maury River at the western foot of the Blue Ridge Mountains. The Maury has a history of destructive floods damaging nearby communities. Particularly notable were floods on Oct 12, 1870, on the death of Robert E. Lee, when the Maury River provided Lee a temporary coffin due to a dock washed away up river (source: Library Virginia Military Institute), and in 1936, 1969, 1985 and 1995.[10] The Flood of '69 was the result of rainfall from the inland movement of Hurricane Camille. The Flood of '85 resulted from the convergence of three systems, including Hurricane Juan, which dumped tremendous amounts of rain on western Virginia.[11] The flood of record for the lower Maury River (downstream of the confluence with the South River), including Buena Vista and Glasgow, occurred on August 20, 1969, at a stage of 31.23 feet (9.52 m) on the Buena Vista gauge. (Flooding begins at 17.0 feet (5.2 m) and major flooding at 21.0 feet (6.4 m).[12]) The downtowns of Buena Vista and Glasgow were submerged in over 5 feet (1.5 m) of water.[11] The upper Maury River including Lexington saw its flood of record during the Flood of 1985 when the gauging station at Rockbridge Baths recorded a value of 19.19 feet (5.85 m) from flood marks.[13] The difference in flooding results from differing contributions of the South River depending on rainfall in the respective watersheds.

The James C. Olin Flood Control Project was completed in 1997 to reduce the potential for damage from flooding of the Maury River and inland streams in Buena Vista.

Buena Vista is located at Lua error in Module:Coordinates at line 668: callParserFunction: function "#coordinates" was not found. (37.732184, -79.353325). It is surrounded by, but separate from, Rockbridge County. The Maury River forms part of the western boundary of Buena Vista, with the city limits crossing the river in one area to encompass Glen Maury Park on the west side.

U.S. Route 60 passes through the north side of Buena Vista, leading northwest 6 miles (10 km) to Lexington and east across the Blue Ridge Mountains 26 miles (42 km) to Amherst. US 60 intersects Interstate 81 3.5 miles (5.6 km) west of Buena Vista. U.S. Route 501 has its northern terminus in the city and leads south 38 miles (61 km) to Lynchburg, passing through the James River gorge.

There were 2,547 households out of which 30.0% had children under the age of 18 living with them, 49.5% were married couples living together, 14.3% had a female householder with no husband present, and 31.3% were non-families. 27.6% of all households were made up of individuals and 13.5% had someone living alone who was 65 years of age or older. The average household size was 2.38 and the average family size was 2.87.

Buena Vista is home to Southern Virginia University, which had an enrollment of 804 full-time students in the autumn of 2011.[21] Students adhere to an honor code including dress and moral standards.

Buena Vista runs its own independent school district. Residents within the city are under Buena Vista City Public Schools (BVCPS). The school district has two elementary schools: F. W. Kling Elementary School, and Enderly Heights Elementary School. Kling resides at the north end of the city, north of Federal Route 60 on Lombardy Ave. Enderly resides at the south end of the city at the junction of Federal Route 501 and 2nd Street. The district has one middle school, called Parry McCluer Middle School. It resides in the middle of the city along Chestnut Ave. beside 23rd street.Parry McCluer High School is the districts only high school, located on 100 Bradford Road. The school district is classified as a Title 1 school division.[22]

Buena Vista is within the Roanoke/Lynchburg media market. Local television news coverage is provided by television stations based in Roanoke, Virginia. The Roanoke Times is Buena Vista’s major daily newspaper. Several non-daily print publications are produced locally which cover the Buena Vista, Lexington, and Rockbridge County area as listed below:

The climate in this area is characterized by hot, humid summers and generally mild to cool winters. According to the Köppen Climate Classification system, Buena Vista has a humid subtropical climate, abbreviated "Cfa" on climate maps.[26]