Earl of Huntingdon is a title which has been created several times in the Peerage of England. The medieval title (1065 creation) was associated with the ruling house of Scotland (David of Scotland).

The seventh and most recent creation dates to 1529. In this lineage, the current holder of the title is William Hastings-Bass, 17th Earl of Huntingdon (b. 1948).

In English folklore, the title is sometimes associated with Robin Hood.

Huntingdonshire was part of East Anglia, inhabited by a population known as the Gyrwas from about the 6th century. It fell to the Danes in the 9th century, but was re-conquered under Edward the Elder in 915. An earldom of Huntingdon was established shortly after, and it was one of the seven earldoms of Saxon England during the reign of king Edward the Confessor. It was created for Bjorn Eastrithson, cousin to Harold Godwinson (later king Harold).[citation needed] The earldom at that time carried extensive powers and covered a wide area of East Midlands, covering the counties of Northampton and Bedford as well as Huntingdon.

In 1065 the earldom passed to Waltheof, son of Siward, Earl of Northumbria. Waltheof kept his title following the Conquest in 1066, and even after his rebellion in 1067, and married Judith, King William's niece. However, after a second rebellion in 1076 he was executed and the earldom reduced in size and power.

The earldom was inherited by Waltheof's daughter Maud, countess of Huntingdon, and passed to her husbands in turn, first Simon de Senlis and then David King of Scotland.

Following her death, and during the reigns of Matilda and Stephen and the anarchy that ensued, the earldom was the subject of dispute between Maud's sons Simon II and Henry the prince, and was held by both at various times. In the reign of Henry II, following the death of Simon II, it was settled on the Scottish house, and the sons of Prince Henry: first Malcolm,[1] then William, then David. With the death of David's childless son John in 1237, the title was not passed on and became extinct. 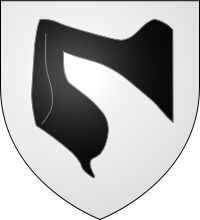 Arms of the Hastings family, Earls of Huntingdon as recorded in the Gelre Armorial: Argent, a maunch sable 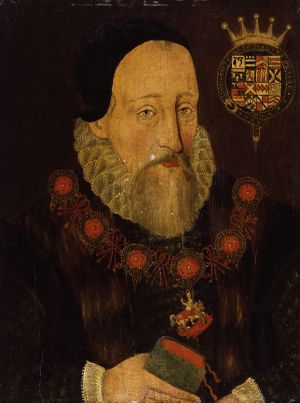 The title was re-created for George Hastings, 3rd Baron Hastings, 5th Baron Hungerford, 6th Baron Botreaux and 4th Baron de Moleyns. He fought in the French Wars of Henry VIII. In 1529 the King created him Earl of Huntingdon in the Peerage of England. His eldest son, the second Earl, was a Lieutenant-General and served as Commander-in-Chief of the Army. Lord Huntingdon married Catherine, daughter and co-heiress of Henry Pole, 1st Baron Montagu, son of Sir Richard Pole and Margaret Pole, 8th Countess of Salisbury, daughter and sole heiress of George, Duke of Clarence, brother of King Edward IV. On his death the titles passed to his son, the third Earl. He was a possible heir presumptive to the crown through his mother, though Elizabeth I never acknowledged his claim officially. Lord Huntingdon was one of the custodians of Mary, Queen of Scots, and also served as President of the Council of the North. He was succeeded by his younger brother, the fourth Earl. He represented Derbyshire and Leicestershire in the House of Commons and served as Lord-Lieutenant of Rutland and Leicestershire.

The earldom was assumed by the late Earl's distant relative (his fifth cousin once removed) Reverend Theophilus Henry Hastings. He was the great-great-great-grandson of Sir Edward Hastings (d. 1603), younger son of the second Earl. He is by some sources considered as the de jure eleventh Earl while some sources do not include him in the numbering of the Earls. On his death the claim passed to his nephew Hans Francis Hastings, son of George Hastings. He was allowed to take his seat in the House of Lords as the Earl of Huntingdon in 1819. Depending on the sources he is numbered as the eleventh or twelfth Earl. Lord Huntingdon served as Governor of Jamaica from 1822 to 1824. His great-great-grandson (the titles having descended from father to son), the sixteenth (or fifteenth Earl), was an artist, academic and Labour politician. He died without male issue in 1990 and was succeeded by his first cousin once removed, the seventeenth (or sixteenth) and (As of 2010[update]) present holder of the title. He is the eldest son of Captain Peter Robin Hood Hastings Bass (1920–1964) (who assumed the additional surname of Bass, which was that of his uncle by marriage, Sir William Bass, 2nd Baronet, by deed poll in 1954), son of Aubrey Craven Theophilus Robin Hood Hastings (1878–1929), younger son of the fourteenth Earl.

The Earl possesses no subsidiary titles, but his eldest son uses the invented courtesy title of Viscount Hastings to avoid confusion, there already being a Baron Hastings.

The family seat of the present line is at Hodcott House, near West Ilsley, in Berkshire.