The economy of Northern Ireland is the smallest of the four countries of the United Kingdom. Northern Ireland previously had a traditionally industrial economy, most notably in shipbuilding, rope manufacture and textiles, but most heavy industry has since been replaced by services.

To this day, Northern Ireland still suffers from the results of the Troubles, which occurred between the late 1960s until the mid-1990s.

Throughout the 1990s, the Northern Irish economy grew faster than did the economy of the rest of the UK, due in part to the Celtic Tiger rapid growth of the economy of the Republic of Ireland and the so-called "peace dividend". Growth slowed to the pace of the rest of the UK during the down-turn of the early years of the new millennium, but growth has since rebounded; in 2005, the Northern Irish economy is estimated to have grown by 3.2%, almost twice as fast as the UK as a whole, and future growth is expected to be stronger than that of the rest of the United Kingdom,[3] though lower than that of the Republic. In April 2007 a Halifax survey found Northern Ireland's average house price to one of the highest in the UK, behind London, the South East and the South West. It also found Northern Ireland to have all of the top ten property "hot spots", with the Craigavon and Newtownards areas increasing by 55%.[4]

Unemployment in Northern Ireland has decreased substantially in recent years, and is now roughly at 6.1%, down from a peak of 17.2% in 1986.[5][6] Youth unemployment and long-term unemployment have fallen most quickly. Working-age economic inactivity is 28%, which is the highest of any UK region.[7]

Northern Ireland's macroeconomy is also characterised by considerably longer actual working hours and lower gender income disparity than in the United Kingdom as a whole.[7]

Since the signing of the Good Friday Agreement, investment in Northern Ireland has increased significantly. Most investment has been focused in Greater Belfast and to a lesser extent Greater Derry. Major projects include the £400 million Victoria Square retail development in Belfast City Centre. The city will hosts the largest waterfront development in Europe with the Titanic Quarter[8] scheme, costing over £1 billion and taking seven years to complete. The Laganside Corporation has been at the forefront of the redevelopment of the riverfront along the banks of the River Lagan, to date the corporation has overseen the investment of over £800 million in the riverside area. The Cathedral Quarter has also seen substantial investment. In Londonderry/Derry, the ILEX Urban Regeneration Company has responsibility for driving forward the regeneration of the city. It is currently charged with redeveloping Ebrington Square and Fort George and creating 12,000 new jobs in the city by 2020. The Culture Company is charged with running events and programmes during the city's stint as City of Culture in 2013.

In addition, the Department of Enterprise, Trade and Investment has commissioned MATRIX, the Northern Ireland Science Industry Panel,to advise government on the commercial exploitation of R&D and science and technology in Northern Ireland.[9]

The Matrix Panel aims to grow NIs wealth by encouraging the exploitation of its science and R&D base. The work has shown that there is still a need for greater exploitation of science and technology and a step-change in innovation in the economy and workplaces.[10]

The Panel’s recommendations are the result of a collaborative effort of technology industry leaders and experts in Northern Ireland.[11]

Agriculture in Northern Ireland is heavily mechanised, thanks to high labour costs and heavy capital investment, both from private investors and the European Union's Common Agricultural Policy. In 2000, agriculture accounted for 2.4% of economic output in Northern Ireland, compared to 1% in the United Kingdom as a whole.[12] As in the rest of the United Kingdom, livestock and dairy account for the majority of agricultural output. The main crops are (in descending order of value) potatoes, barley, and wheat. 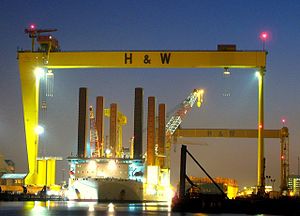 Harland and Wolff cranes in Belfast

Heavy industry is concentrated in and around Belfast, although other major towns and cities also have heavy manufacturing areas. Machinery and equipment manufacturing, food processing, textile and electronics manufacturing are the leading industries. Other industries such as papermaking, furniture manufacturing, aerospace and shipbuilding are also important, concentrated mostly in the eastern parts of Northern Ireland. Of these different industries, one of the most notable is that of Northern Ireland's fine linens, which is considered as one of the most well-known around Europe.

Although its share of economic output has declined, manufacturing output in Northern Ireland has remained almost unchanged over the past five years, after a period of steep manufacturing growth between 1998 and 2001.[13] However, this overall picture of health hides a dramatic shift in manufacturing priorities, with the decline of traditional industries, such as textiles and shipbuilding, at the expense of high tech and capital-intensive industries. In 2005, chemicals and engineering (both of which belong firmly to the latter group) were the only two manufacturing sub-sectors to record growth, whilst output of textiles fell by 18%.[14]

Engineering is the largest manufacturing sub-sector in Northern Ireland, particularly in the fields of aerospace and heavy machinery. Bombardier Aerospace is the province's largest industrial employer, with 5,400 workers at five sites in the Greater Belfast area.[15] Other major engineering employers in Northern Ireland include Bombardier Aerospace, Caterpillar, DuPont, Emerson Electric, Fujitsu, Northbrook Technology, Seagate and NACCO. Many of these manufacturers receive British government financial backing, and enjoy close academic and business links with Queen's University Belfast and the University of Ulster, of which Queen's University Belfast ranks as one of the best British universities for all engineering courses.[16]

Belfast's famous shipyard, Harland and Wolff, which in the early 20th century was the world's biggest shipbuilder, suffered from intense international competition during the 1970s and 1980s and declined rapidly. During the 1990s the company diversified into civil engineering and industrial fabrication, manufacturing bridges and oil platforms. The company made an unsuccessful bid to build the Queen Mary 2, which it was hoped would re-stimulate the yard's shipbuilding business. The vast works on Queen's Island were downsized, with much of the land (including the slipway were RMS Titanic was built) sold off for redevelopment in the 2000s as the 'Titanic Quarter'- a new residential, commercial and high-tech industrial district. The modern, smaller yard employs only 800 people. H&W have not built a ship since 2003, but has seen workload increase through being involved in shipbreaking, ship repair and maintenance and conversion work. The company has also been active in the design and construction of offshore power generation equipment- both wind turbines and wave-action turbines.

Despite the negative image of Northern Ireland held in many foreign countries, on account of the Troubles, tourism is an important part of the Northern Irish economy. In 2004, tourism revenue rose 7% to £325m, or over 1% of the local economy, on the back of a rise of 4% in total visits to 2.1 m in the year.[3] Tourism is considered likely to become one of the main growth areas of the economy in the near future, with the continuation of the peace process and the normalisation of the image of Northern Ireland internationally. The most popular tourist attractions include the historic cities of Derry, Belfast and Armagh, the Giant's Causeway, and Northern Ireland's many castles. The NI 2012 Our Time, Our Place tourism campaign created by the Northern Ireland Tourist Board generated a profit of £31 million in 2012 (subtracting November and December) the first six months of 2013, according to a study by an independent researcher commissioned by the organization.[18] High profile events initiated by the program include the opening of the £77 million Titanic Belfast and the construction of a Giant's Causeway visitor's centre.[19]

Energy policy in the province is maintained by the Department of Enterprise, Trade and Investment.

In the other areas of Northern Ireland, specifically towards Derry City, gas comes from two interconnector pipelines, one being supplied by the Republic's gas supplier, Bord Gáis. The North-West pipeline from Carrickfergus in County Antrim to Derry opened in November 2004, and the South-North pipeline from Gormanston (in the Republic) to Antrim was opened in October 2006. The complete South-North pipeline to Dublin opened in November 2007, passing Armagh, Banbridge, Craigavon and Newry. Since December 2005, Bord Gáis has supplied gas to residential customers in this area under the name firmus energy. 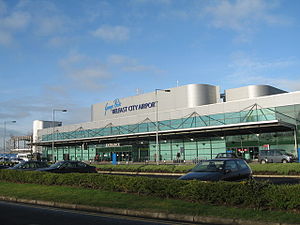 Northern Ireland has under-developed transport infrastructure with most infrastructure concentrated on Greater Belfast, Greater Derry and Craigavon. Northern Ireland has a total of 24,820 km (15,420 mi) of roads, or 1 km for each 68 people (1 mi for each 109 people), which is considerably more than in the United Kingdom as a whole (1 km per 162 people).[24] There are seven motorways in Northern Ireland, extending radially from Belfast, and connecting that city to Antrim, Dungannon, Lisburn, Newtownabbey, and Portadown.

Northern Ireland Railways (NIR) runs passenger trains and presently carries no freight though it is possible to carry freight. NIR is owned by the people of Northern Ireland and has embarked upon significant investment on the Belfast-Derry railway line to upgrade the infrastructure between Belfast and Derry the largest cities in Northern Ireland. NIR connects Belfast Great Victoria Street and Belfast Central to Antrim, Ballymena, Coleraine, Portrush, Londonderry along the Northern Corridor and the Belfast Suburban Rail network serves places near Belfast, along with the Enterprise (train service) connecting Lisburn, Portadown, Newry and across the border along the Dublin-Belfast railway line to Dublin Connolly.

Northern Ireland Railways could be extended by re-opening railway lines such as from Portadown to Armagh railway station in Armagh.

Northern Ireland is home to three civilian airports: Belfast City, Belfast International, and City of Derry. In terms of Airport rail link connections only Belfast City Airport is served by train from Sydenham station on the Bangor Line.

In addition to these existing links, several organisations have proposed a tunnel under the North Channel, with one possible site connecting the eastern part of Northern Ireland to Wigtownshire. The idea has been given technical consideration since the 19th century, but, as of 2012, no major political party has advocated such a link, due to financial constraints.

Alongside official national statistics a number of respected private sector surveys are used to understand how the economy is performing. These include the British Chambers of Commerce Quarterly Economic Survey.[27] This survey has information on the performance of Northern Irish businesses since 1989.

These areas are the following:

Comparison with France and the Republic of Ireland