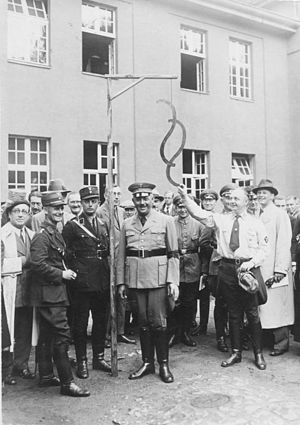 Hanns Kerrl (11 December 1887 – 12 December 1941) was a German Nazi politician. His most prominent position, from July 1935, was that of Reichsminister of Church Affairs. He was also President of the Prussian Landtag (1932–1934) and head of the Zweckverband Reichsparteitag Nürnberg and in that capacity edited a number of Nuremberg rally yearbooks.

Kerrl was born into a Protestant family in Fallersleben; his father was a headmaster. Hanns Kerrl joined the Nazi Party (NSDAP) in 1923 and soon afterwards went into regional politics.

On 17 June 1934 he became Reichsminister without Portfolio. In the following year, on 16 July 1935, he was appointed Reichsminister für die kirchlichen Angelegenheiten (Minister of Ecclesiastical Affairs), to head a newly created ministry. On the one hand, Kerrl was supposed to mediate between those Nazi leaders who hated Christianity (for example Heinrich Himmler) and the churches themselves and stress the religious aspect of the Nazi ideology. On the other hand, in tune with the policy of Gleichschaltung, it was Kerrl's job to subjugate the churches—subject the various denominations and their leaders and subordinate them to the greater goals decided by the Führer, Adolf Hitler. Indeed, Kerrl had been appointed after Ludwig Müller had been unsuccessful in getting the Protestants to unite in one "Reich Church."

Kerrl was considered one of the milder Nazis. Nonetheless, in a speech before several compliant church leaders in 1935, he revealed the regime's growing hostility to the church when he declared, "Positive Christianity is National Socialism." He also pressured most of the Protestant pastors to swear an oath of loyalty to Hitler.

Gregory Munro (Australian Catholic University, Brisbane) states that "Kerrl was the only Minister with an explicit commitment to reach a synthesis between Nazism and Christianity. Much to the ire of leading Nazis, Kerrl maintained that Christianity provided an essential foundation for Nazi ideology and that the two forces had to be reconciled. In the short term, at least, it appears that Hitler hoped to recover the initiative in the Church Struggle by returning to the official NSDAP policy of neutrality. The available documents suggest that Hitler temporized between two approaches to the question of the Churches. On the one hand, the predominant radical elements in the Party wanted to reduce clerical influence in German society as quickly as possible—and by force if necessary. On the other hand, Hitler clearly had much to gain from any possible peaceful settlement whereby the Churches would give at least implicit recognition to the supremacy of Nazi ideology in the public realm and restrict themselves solely to their internal affairs.[citation needed]

"In 1935 Kerrl scored some initial successes in reconciling the differing parties in the Church Struggle. However, by the second half of 1936, his position was clearly undermined by NSDAP hostility, and by the refusal of the churches to work with a government body which they regarded as a captive or stooge of the Nazi Party. Hitler gradually adopted a more uncompromising and intolerant stance, probably under the growing influence of ideologues such as Bormann, Rosenberg and Himmler, who were loath to entertain any idea of the new Germany having a Christian foundation even in a token form."[1]

Increasingly marginalized by Hitler, who did not even grant him a personal conversation, Kerrl became desperate and embittered. A completely powerless minister, he died in office on 12 December 1941, aged 54. Hitler did not appoint a successor.

The American diplomat, William Russell wrote in his memoir (Berlin Embassy) that Kerrl frequented "Berlin dives" and bars "until the wee hours of the morning".[2]