From Infogalactic: the planetary knowledge core
Jump to: navigation, search
This article is about the ducal house that currently rules Denmark and Norway. For the elder line, see Schleswig-Holstein-Sonderburg-Glücksburg (elder line).

Junior branches of the dynasty include the royal houses of Denmark, Iceland, Norway, and Greece. Charles, Prince of Wales, heir apparent to the thrones of the United Kingdom and the other Commonwealth realms,[1][2] belongs by decree to the House of Windsor,[3] but descends patrilineally from the House of Schleswig-Holstein-Sonderburg-Glücksburg. 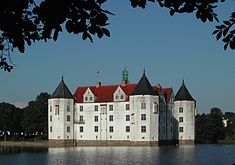 Glücksburg Castle, one of the most important Renaissance castles in northern Europe

The House descends patrilineally from the Dukes of Schleswig-Holstein-Sonderburg-Beck. The last of them was made Duke of Glücksburg by the King of Denmark in 1825 and changed his title accordingly to Friedrich Wilhelm, Duke of Schleswig-Holstein-Sonderburg-Glücksburg. He was married to Princess Louise Caroline of Hesse-Kassel, a granddaughter of King Frederick V of Denmark of the House of Oldenburg.

Neither the Dukes of Beck nor of Glücksburg were sovereign rulers; they held their lands in fief to the sovereign Dukes of Schleswig and Holstein, i.e. the Kings of Denmark and, before 1773, the Dukes of Holstein-Gottorp.

Prince Christian of Schleswig-Holstein-Sonderburg-Glücksburg, the fourth son of Duke Friedrich Wilhelm, was recognized in the London Protocol of 1852 as successor to the childless King Frederick VII of Denmark, as Christian was married to Frederick's first cousin, Luise of Hesse-Kassel. He became King of Denmark as Christian IX on 15 November 1863.

Wilhelm, the second son of Crown Prince Christian and Crown Princess Luise, was elected King of the Hellenes on 30 March 1863 to succeed the deposed Wittelsbach Otto of Greece and took the name George I of Greece.

Christian IX's daughters, Alexandra of Denmark and Dagmar of Denmark (who became Maria Feodorovna), married Edward VII of the United Kingdom and Alexander III of Russia, respectively. As a result, by 1914, descendants of King Christian IX held the crowns or consortships of several European realms; Christian IX became known as the Father-in-law of Europe. 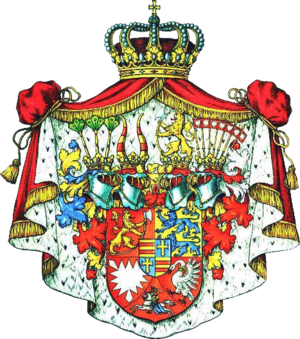 Coat of arms of the Prince of Schleswig-Holstein

The Dukes of Schleswig-Holstein-Sonderburg-Glücksburg constitute the senior male line of the family, who hold the headship of both the House of Glücksburg and the entire House of Oldenburg.

The heir apparent is Friedrich Ferdinand, Hereditary Prince of Schleswig-Holstein (b. 1985). 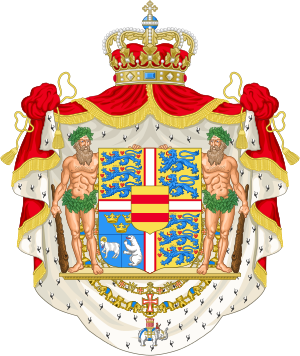 Coat of arms of the Queen of Denmark

The heir apparent is Frederik, Crown Prince of Denmark (b. 1968), who belongs patrilineally to the House of Monpezat. See the present line of succession.

Princes domiciled in Denmark that married without the monarch's permission have forfeited their dynastic status,[4] receiving the noble title, Count of Rosenborg, heritable by legitimate male-line descendants, with the style Excellency They and their offspring are not members of the House anymore.

King of the Hellenes 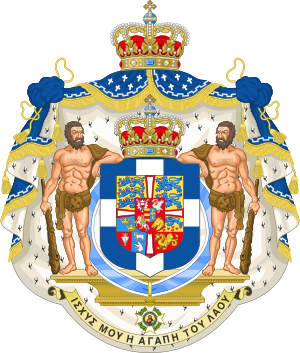 Coat of arms of the King of the Hellenes
File:Greek 30 Drachma 1963 small.jpg
Thirty-drachma coin of 1963, commemorating the centennial of the reign of the House of Glücksburg. Clockwise from the top: Paul, George II, Alexander, Constantine I and George I.

In 1863 and with the name George I, Prince Wilhelm of Denmark became King of the Hellenes. His father was King Christian IX of Denmark.

The monarchy was abolished in 1973. A referendum on the monarchy took place on December 8 1974, and 69.18% of the voters decided against the return of the monarchy. 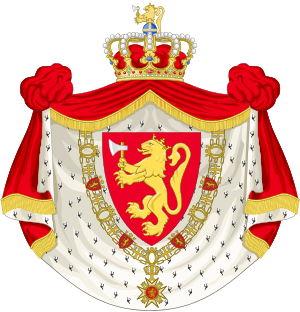 Coat of arms of the King of Norway

In 1905 and with the name Haakon VII, Prince Carl of Denmark became King of Norway. His father was King Frederick VIII of Denmark, and one of his uncles was King George I of Greece.

The heir apparent is Crown Prince Haakon of Norway (b. 1973). See the present line of succession. 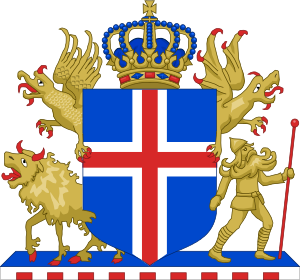 In 1918, Iceland was elevated from an autonomous Danish province to a separate Kingdom of Iceland. King Christian X of Denmark was henceforth King of Denmark and Iceland. This lasted until 1944, when Iceland dissolved the union between the two countries. Christian X was the only monarch to hold a distinct Icelandic title, and used the same CX cypher and the same regnal number as in Denmark. 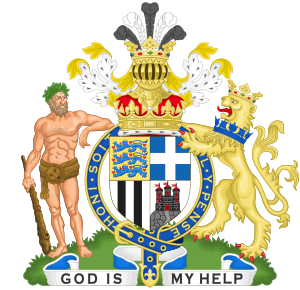 Coat of arms of the Duke of Edinburgh

In 1947, Philip of Schleswig-Holstein-Sonderburg-Glücksburg, Prince of Greece and of Denmark (who relinquished all his titles and adopted the surname Mountbatten), was created Duke of Edinburgh by his father-in-law, George VI of the United Kingdom. The first seventeen places in the line of succession to the British throne are held by descendants of the Duke of Edinburgh.

Error creating thumbnail: File with dimensions greater than 25 MP
Family Tree of house of Oldenborg and its cadet branch the house of Glucksborg and its branches