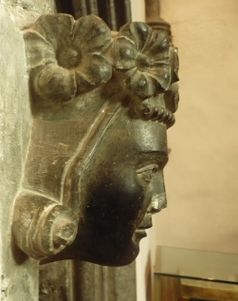 The House of Sverre (Norwegian: Sverreætten)[1] was a royal house or dynasty which ruled, at various times in history, the Kingdom of Norway, hereunder the kingdom's realms, and the Kingdom of Scotland. The house was founded with King Sverre Sigurdsson. It provided the rulers of Norway from 1184 to 1319.

The house was founded with King Sverre Sigurdsson, who claimed to be an illegitimate son of King Sigurd Munn, when he was made King of Norway. After Sverre's death, his descendants would expand the influence, wealth, and power of the dynasty. Under his grandson Haakon IV's rule, medieval Norway reached its peak.

Also Margaret, Maid of Norway was a member of this family.

The house replaced the Gille dynasty, and was again replaced by the House of Bjelbo, which inherited Norway's throne. They were the last reigning family that claimed patrilineal descent from Harald Fairhair.

The main arms of the kings belonging to the House of Sverre, was a golden crowned lion on a red field. The lion was later supplied with a silver axe symbolising Olaf the Holy. This became the coat of arms of Norway.

The rulers within the royal house or dynasty would often have a "junior king" along with a "senior king" (three dates show the reign as junior king to the start of reign as senior to the end of their reign). Here is a list of the rulers when the house held the power in Norway: