Public holidays in the United Kingdom

Public holidays in the United Kingdom, commonly referred to as bank holidays, are days where most businesses and non - essential services are closed although an increasing number of retail businesses (especially the larger ones) do open on some of the public holidays. There are restrictions on trading on Sundays and Christmas Day.

Four public holidays are common to all countries of the United Kingdom. These are: New Year's Day, the first Monday in May, Christmas Day, and Boxing Day. Some banks open on some bank holidays.

The two terms are often used interchangeably, although strictly and legally there is a difference. A government website describes the difference as follows:

Bank holidays may be declared in two ways:

Unlike the USA, where public holidays falling on a Saturday are sometimes observed on the preceding Friday, British public holidays are always moved to a later date, not an earlier one).[1][2][3][4] 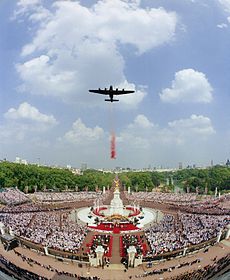 Most bank holidays are not recognised in Scotland, as public holidays are generally determined by local authorities across Scotland. Some of these may be taken in lieu of statutory holidays while others may be additional holidays, although many companies, including Royal Mail, do not follow all the holidays listed below, and many swap between English and local holidays.

There have been many protests about banks opening on 2 January since this decision was taken.[citation needed] This has resulted in many banks now providing only a limited service on 2 January, with most members of staff still entitled to the holiday

Note: In 2012, there was a special holiday on Tuesday, 5 June, to celebrate the Diamond Jubilee of Elizabeth II. Most areas in Scotland did not have Monday 4 June as a holiday.