Wangen im Allgäu is a historic city in southeast Baden-Württemberg, Germany. It lies north-east of Lake Constance in the Westallgäu. It is the second-largest city (Population: 27,157 in 2005) in the Ravensburg district and is a nexus for the surrounding communities. From 1938 to 1972, Wangen was the county seat of the Wangen rural district.

Wangen in Allgäu lies on the north bank of the upper Argen River. The Lower Argen flows past northwest Wangen and unites southwest of the city with the Upper Argen. The city today is shaped by its historical town center as well as by numerous nearby districts.

The city was first mentioned in 815 under the name "Wangun" in a monastery document.

In 1217, Emperor Fredrick II declared in a document that Wangen should remain in royal hands. In 1286, King Rudolph I granted Wangen the status of free imperial city.

During the late Middle Ages, the city's growth was amplified by its central location at the crossroads between Ravensburg, Lindau, Leutkirch, and Isny and the growing trade through the Alps. 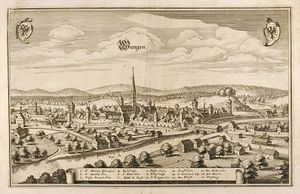 A picture of Wangen during the 17th century 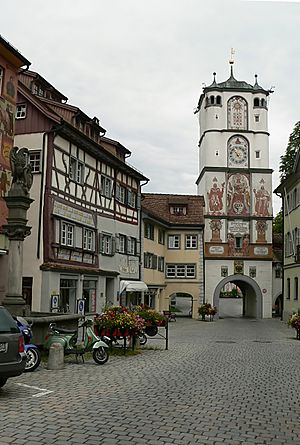 Wangen's production and export of manufactured goods, particularly scythes and canvas, gave the city a tremendous positive trade balance. This surplus money was used to acquire lands outside of the city walls, thus giving Wangen a safeguard against economic fluctuations.

During the German Mediatisation, in 1802, Wangen lost its status as a Free City and was incorporated into the Kingdom of Bavaria; it later changed hands in 1810 to the Kingdom of Württemberg.

In 1936, the city was officially named "Wangen in Allgäu"

From 1938 up unto its dissolution and integration into the Ravensburg district in 1972, Wangen was the capital of the Wangen rural district. In 1973, Wangen was officially designated by the Baden-Württemberg state government to Großen Kreisstadt (large district town) due to its population having reached 20,000.

In 1999, the largest flood in the most recent 50 years of Wangen's history completey flooded the lower city. The city was again flooded in 2006 by the upper Argen River.

During the 2006 FIFA World Cup, the national team of Togo stayed in Wangen.

Despite several major fires in 1539, 1793, and 1858, the old part of the town remains a juxtaposition of architectural elements ranging from those of the early middle ages to those of the late baroque era.

The Oberstadtkirche St. Martin ("St Martin's Upper City Church") is one of Wangen's oldest buildings. The church was already present in the 9th century; it was renovated numerous times in the following years. It contains both Romanesque and Gothic architecture.

The Ravensburg Gate is the city's prime landmark. It was first mentioned in 1472, but was probably changed to its current appearance in 1608. The building is decorated with Renaissance-era artwork. Similarly aged relics of the old city include the Lindau Gate and the Pfaffenturm tower.

The local history museum, Heimatmuseum in der Eselmühle, was opened in 1974 in a former mill acquired by the city in 1969. The museum displays the original mechanisms of the mill in addition to a collections from various spans of the city's history.

Wangen lies on the A96 Autobahn between Lindau and Memmingen, in addition to federal highways 18 and 32. The town is part of the Aulendorf – Kißlegg – Wangen - Hergatz – Lindau and Ulm – Memmingen – Kißlegg – Wangen – Hergatz – Lindau train lines. It lies on the bus route between Ravensburg and Isny. The city also belongs to the Bodensee–Oberschwaben public transportation association.

The Wangen district has two vocational schools (Friedrich-Schiedel-Schule and Kaufmännischen Schule Wangen), in addition to the Heinrich-Brügger-Schule medical school.

Wangen is serviced by the Schwäbische Zeitung newspaper as well as the local Regio TV television station.