Carolingian or Caroline minuscule is a script which developed as a calligraphic standard in Europe so that the Latin alphabet could be easily recognized by the literate class from one region to another. It was used in the Holy Roman Empire between approximately 800 and 1200. Codices, pagan and Christian texts, and educational material were written in Carolingian minuscule throughout the Carolingian Renaissance. The script developed into blackletter and became obsolete, though its revival in the Italian Renaissance forms the basis of more recent scripts. 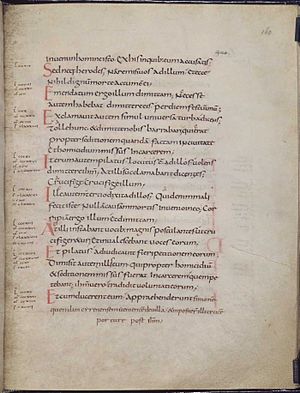 The script ultimately developed from Roman half uncial and its cursive version, which had given rise to various Continental minuscule scripts, which were combined with features from the "Insular" scripts that were being used in Irish and English monasteries.

Carolingian minuscule was created partly under the patronage of the Emperor Charlemagne (hence Carolingian). Charlemagne had a keen interest in learning, according to his biographer Einhard:

He also tried to write, and used to keep tablets and blanks in bed under his pillow, that at leisure hours he might accustom his hand to form the letters; however, as he did not begin his efforts in due season, but late in life, they met with ill success.

Although Charlemagne was never fully literate, he understood the value of literacy and a uniform script in running his empire. Charlemagne sent for the English scholar Alcuin of York to run his palace school and scriptorium at his capital, Aachen. Efforts to supplant Merovingian and Germanic scripts had been under way before Alcuin arrived at Aachen, where he was master from 782 to 796, with a two-year break. The new minuscule was disseminated first from Aachen, of which the Ada Gospels provide classic models, and later from the influential scriptorium at Marmoutier Abbey (Tours), where Alcuin withdrew from court service as an abbot in 796 and restructured the scriptorium.[1]

Carolingian minuscule was uniform, with rounded shapes in clearly distinguishable glyphs, disciplined and above all, legible. Clear capital letters and spaces between words – norms we take for granted – became standard in Carolingian minuscule, which was one result of a campaign to achieve a culturally unifying standardization across the Carolingian Empire.

Traditional charters, however, continued to be written in a Merovingian "chancery hand" long after manuscripts of Scripture and classical literature were being produced in the minuscule hand. Documents written in a local language, like Gothic or Anglo-Saxon rather than Latin, tended to be expressed in traditional local script.

Carolingian script generally has fewer ligatures than other contemporary scripts, although the et (&), æ, rt, st and ct ligatures are common. The letter d often appears in a uncial form with an ascender slanting to the left, but the letter g is essentially the same as the modern minuscule letter, rather than the previously common uncial ᵹ. Ascenders are usually "clubbed" – i.e. they become thicker near the top.

The early period of the script, during Charlemagne's reign in the late 8th century and early 9th, still has widely varying letter forms in different regions. The uncial form of the letter a, similar to a double c (cc), is still used in manuscripts from this period. There is also use of punctuation such as the question mark, as in Beneventan script of the same period. The script flourished during the 9th century, when regional hands developed into an international standard, with less variation of letter forms. Modern glyphs, such as s and v, began to appear (as opposed to the "long s" ſ and u), and ascenders, after thickening at the top, were finished with a three-cornered wedge. The script began to evolve slowly after the 9th century. In the 10th and 11th centuries, ligatures were rare and ascenders began to slant to the right and were finished with a fork. The letter w also began to appear. By the 12th century, Carolingian letters had become more angular and were written closer together, less legibly than in previous centuries; at the same time, the modern dotted i appeared.[citation needed] 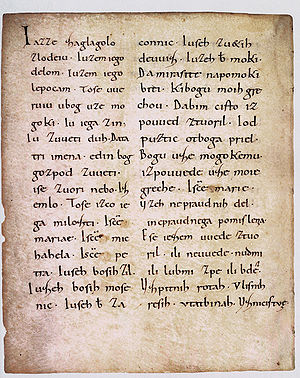 The new script spread through Western Europe most widely where Carolingian influence was strongest. In luxuriously produced Lectionaries that now began to be produced for princely patronage of abbots and bishops, legibility was essential. It reached far afield: the 10th century Freising manuscripts, which contain the oldest Slovene language, the first Roman-script record of any Slavic language, are written in Carolingian minuscule. In Switzerland, Carolingian was used in the Rhaetian and Alemannic minuscule types. Manuscripts written in Rhaetian minuscule tend to have slender letters, resembling Insular script, with the letters ⟨a⟩ and ⟨t⟩, and ligatures such as ⟨ri⟩, showing similar to Visigothic and Beneventan. Alemannic minuscule, used for a short time in the early 9th century, is usually larger and broader, very vertical compared to the slanting Rhaetian type. In Austria, Salzburg was the major centre of Carolingian script, while Fulda, Mainz, and Würzburg were the major centres in Germany. German minuscule tends to be oval-shaped, very slender, and slants to the right. It has uncial features as well, such as the ascender of the letter ⟨d⟩ slanting to the left, and vertical initial strokes of ⟨m⟩ and ⟨n⟩.

In northern Italy, the monastery at Bobbio used Carolingian minuscule beginning in the 9th century. Outside the sphere of influence of Charlemagne and his successors, however, the new legible hand was resisted by the Roman Curia; nevertheless the Romanesca type was developed in Rome after the 10th century. The script was not taken up in England and Ireland until ecclesiastic reforms in the middle of the 10th century; in Spain a traditionalist Visigothic hand survived; and in southern Italy a 'Beneventan minuscule' survived in the lands of the Lombard duchy of Benevento through the 13th century, although Romanesca eventually also appeared in southern Italy.

Scholars during the Carolingian Renaissance sought out and copied in the new legible standardized hand many Roman texts that had been wholly forgotten. Most of our knowledge of classical literature now derives from copies made in the scriptoria of Charlemagne. Over 7000 manuscripts written in Carolingian script survive from the 8th and 9th centuries alone.

Though the Carolingian minuscule was superseded by Gothic blackletter hands, it later seemed so thoroughly 'classic' to the humanists of the early Renaissance that they took these old Carolingian manuscripts to be ancient Roman originals and modelled their Renaissance hand on the Carolingian one.[2] From there the script passed to the 15th- and 16th-century printers of books, such as Aldus Manutius of Venice. In this way it forms the basis of our modern lowercase typefaces. Indeed 'Carolingian minuscule' is a style of typeface, which approximates this historical hand, eliminating the nuances of size of capitals, long descenders, etc.