The Ugaritic script is a cuneiform (wedge-shaped) abjad used from around either the fifteenth century BC[1] or 1300 BC[2] for Ugaritic, an extinct Northwest Semitic language, and discovered in Ugarit (modern Ras Shamra), Syria, in 1928. It has 30 letters. Other languages (particularly Hurrian) were occasionally written in the Ugaritic script in the area around Ugarit, although not elsewhere.

Clay tablets written in Ugaritic provide the earliest evidence of both the North Semitic and South Semitic orders of the alphabet, which gave rise to the alphabetic orders of Arabic (starting with the earliest order of its abjad) and the Greek and Latin alphabets on the one hand, and of the Ge'ez alphabet on the other. Arabic and Old South Arabian are the only other Semitic alphabets which have letters for all or almost all of the 29 commonly reconstructed proto-Semitic consonant phonemes. According to Manfried Dietrich and Oswald Loretz in Handbook of Ugaritic Studies (eds. Wilfred G.E. Watson and Nicholas Wyatt, 1999): "The language they [the 30 signs] represented could be described as an idiom which in terms of content seemed to be comparable to Canaanite texts, but from a phonological perspective, however, was more like Arabic" (82, 89, 614).

The script was written from left to right. Although cuneiform and pressed into clay, its symbols were unrelated to those of the Akkadian cuneiform.

Ugaritic was an augmented abjad. In most syllables only consonants were written, including the /w/ and /j/ of diphthongs. However, Ugaritic was unusual among early abjads in also writing vowels after the glottal stop. It is thought that the letter for the syllable /ʔa/ originally represented the consonant /ʔ/, as aleph does in other Semitic abjads, and that it was later restricted to /ʔa/ with the addition, at the end of the alphabet, of /ʔi/ and /ʔu/.[3][4]

The final consonantal letter of the alphabet, s2, has a disputed origin along with both "appended" glottals, but "The patent similarity of form between the Ugaritic symbol transliterated [s2], and the s-character of the later Northwest Semitic script makes a common origin likely, but the reason for the addition of this sign to the Ugaritic alphabet is unclear (compare Segert 1983:201-218; Dietrich and Loretz 1988). In function, [s2] is like Ugaritic s, but only in certain words – other s-words are never written with [s2]."[5] The words that show s2 are predominantly borrowings, and thus it is often thought to be a late addition to the alphabet representing a foreign sound that could be approximated by native /s/; Huehnergard and Pardee make it the affricate /ts/.[6] Segert instead theorizes that it may have been syllabic /su/, and for this reason grouped with the other syllabic signs /ʔi/ and /ʔu/.[7]

Probably the last three letters of the alphabet were originally developed for transcribing non-Ugaritic languages (texts in the Akkadian language and Hurrian language have been found written in the Ugaritic alphabet), and were then applied to write the Ugaritic language. The three letters denoting glottal stop plus vowel combinations were used as simple vowel letters when writing other languages.

The only punctuation is a word divider. 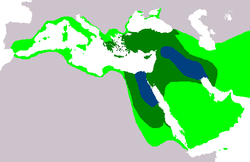 dark green shows approximate spread of writing by 1300 BC

At the time the Ugaritic script was in use (ca. 1300–1190 BC),[8] Ugarit was at the centre of the literate world, among Egypt, Anatolia, Cyprus, Crete, and Mesopotamia. Ugaritic combined the system of the Semitic abjad with cuneiform writing methods (pressing a stylus into clay). However, scholars have searched in vain for graphic prototypes of the Ugaritic letters in Mesopotamian cuneiform. Recently, some have suggested that Ugaritic represents some form of the Proto-Sinaitic alphabet,[9] the letter forms distorted as an adaptation to writing on clay with a stylus. (There may also have been a degree of influence from the poorly understood Byblos syllabary.[10]) It has been proposed in this regard that the two basic shapes in cuneiform, a linear wedge, as in 𐎂, and a corner wedge, as in 𐎓, may correspond to lines and circles in the linear Semitic alphabets: the three Semitic letters with circles, preserved in the Greek Θ, O and Latin Q, are all made with corner wedges in Ugaritic: 𐎉 ṭ, 𐎓 ʕ, and 𐎖 q. Other letters look similar as well: 𐎅 h resembles its assumed Greek cognate E, while 𐎆 w, 𐎔 p, and 𐎘 θ are similar to Greek Y, Π, and Σ turned on their sides.[9] Jared Diamond[11] believes the alphabet was consciously designed, citing as evidence the possibility that the letters with the fewest strokes may have been the most frequent. 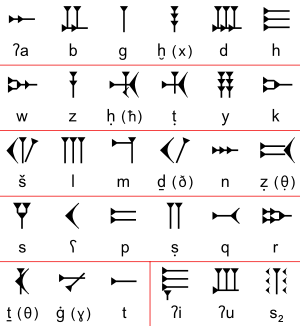 Ugaritic script was added to the Unicode Standard in April, 2003 with the release of version 4.0.