The Syriac alphabet is a writing system primarily used to write the Syriac language from the 1st century AD.[1] It is one of the Semitic abjads directly descending from the Aramaic alphabet through the Palmyrene alphabet,[2] and shares similarities with the Phoenician, Hebrew, Arabic, and the traditional Mongolian alphabets.

Syriac is written from right to left. It is a cursive script where some, but not all, letters connect within a word. The alphabet consists of 22 letters, all of which are consonants. The vowel sounds are supplied either by the reader's memory or by optional diacritic marks.

In addition to the sounds of the language, the letters of the Syriac alphabet can be used to represent numbers in a system similar to Hebrew and Greek numerals.

When Arabic began to be the dominant spoken language in the Fertile Crescent, texts were often written in Arabic with the Syriac script. Malayalam was also written with Syriac script and was called Suriyani Malayalam. These writings are usually called Karshuni or Garshuni (ܓܪܫܘܢܝ). Garshuni is often used today by Neo-Aramaic speakers in written communication such as letters and fliers.

Forms of the Syriac alphabet 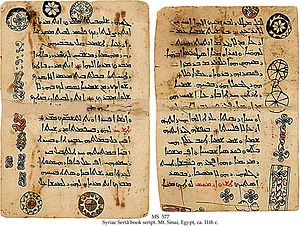 The oldest and classical form of the alphabet is ʾEsṭrangēlā (ܐܣܛܪܢܓܠܐ; the name is thought to derive from the Greek adjective στρογγύλη (strongylē, 'rounded'),[3] though it has also been suggested to derive from ܣܪܛܐ ܐܘܢܓܠܝܐ (serṭā ʾewwangēlāyā, 'gospel character')[4]). Although ʾEsṭrangēlā is no longer used as the main script for writing Syriac, it has received some revival since the 10th century. It is often used in scholarly publications (for instance, the Leiden University version of the Peshitta), in titles and inscriptions. In some older manuscripts and inscriptions it is possible for any letter to join to the left, and older Aramaic letter forms (especially of Ḥeth and the lunate Mem) are found. Vowel marks are usually not used with ʾEsṭrangēlā.

The East Syriac dialect is usually written in the Maḏnḥāyā (ܡܲܕ݂ܢܚܵܝܵܐ‎, 'Eastern') form of the alphabet. Other names for the script include Swāḏāyā (ܣܘܵܕ݂ܵܝܵܐ‎, "conversational", often translated as "contemporary", reflecting its use in writing modern Neo-Aramaic), "Assyrian" (not to be confused with the traditional name for the Hebrew alphabet), "Chaldean", and inaccurately, "Nestorian" (a term that was originally used to refer to the Church of the East in the Persian Empire). The Eastern script resembles ʾEsṭrangēlā more closely than the Western script, being somewhat a midway point between the two. The Eastern script uses a system of dots above or below letters, based on an older system, to indicate vowels:

It is thought that the Eastern method for representing vowels influenced the development of the Niqqud markings used for writing Hebrew.

In addition to the above vowel marks, transliteration of Syriac sometimes includes ə, e̊ or superscript e (or often nothing at all) to represent an original Aramaic schwa that became lost later on at some point in the development of Syriac. Some transliteration schemes find its inclusion necessary for showing spirantization (see below) or for historical reasons. Whether because its distribution is mostly predictable (usually inside a syllable-initial two-consonant cluster) or because its pronunciation was lost, neither the East nor West variants of the alphabet have a sign to represent the schwa.

Many Assyrian Revivalists see the Maḏnḥāyā script as the future national script to be used in a future independent Assyria[citation needed].

The West Syriac dialect is usually written in the Serṭā (ܣܶܪܛܳܐ‎, 'line') form of the alphabet, also known as the Pšīṭā (ܦܫܺܝܛܳܐ‎, 'simple'), 'Maronite', or the 'Jacobite' script (although the term Jacobite is considered derogatory). Most of the letters are clearly derived from ʾEsṭrangēlā, but are simplified, flowing lines. A cursive, chancery hand is evidenced in the earliest Syriac manuscripts, but important works were written in ʾEsṭrangēlā. From the 8th century, the simpler Serṭā style came into fashion, perhaps because of its more economical use of parchment. The Nabataean alphabet (which gave rise to the Arabic alphabet) was based on this form of Syriac handwriting. The Western script is usually vowel-pointed with miniature Greek vowel letters above or below the letter which they follow:

The Syriac alphabet consists of the following letters, shown in their isolated (non-connected) forms. When isolated, the letters Kāp̄, Mīm, and Nūn are usually shown with their initial form connected to their final form (see below). The letters ʾĀlap̄, Dālaṯ, Hē, Waw, Zayn, Ṣāḏē, Rēš, and Taw (and, in early ʾEsṭrangēlā manuscripts, the letter Semkaṯ[5]) do not connect to a following letter within a word. These are marked with an asterisk (*).

1 In the final position following Dālaṯ or Rēš, ʾĀlap̄ takes the normal form rather than the final form.

In modern usage, some alterations can be made to represent phonemes not represented in classical orthography. A mark similar in appearance to a tilde, called Majlīyānā (ܡܓ̰ܠܝܢܐ), is placed either above or below a letter in the Maḏnḥāyā variant of the alphabet to change its phonetic value (see also: Geresh):

In addition to foreign sounds, a marking system is used to distinguish qūššāyā (ܩܘܫܝܐ, 'hard' letters) from rūkkāḵā (ܪܘܟܟܐ, 'soft' letters). The letters Bēṯ, Gāmal, Dālaṯ, Kāp̄, Pē, and Taw, all plosives ('hard'), are able to be spirantized into fricatives ('soft'). The system involves placing a single dot underneath the letter to give its 'soft' variant and a dot above the letter to give its 'hard' variant (though, in modern usage, no mark at all is usually used to indicate the 'hard' value):

The mnemonic bḡaḏkp̄āṯ (ܒܓܕܟܦܬ) is often used to remember the six letters that are able to be spirantized (see also: Begadkefat).

In the East Syriac variant of the alphabet, spirantization marks are usually omitted when they interfere with vowel marks. The degree to which letters can be spirantized varies from dialect to dialect as some dialects have lost the ability for certain letters to be spirantized. For native words, spirantization depends on the letter's position within a word or syllable, location relative to other consonants and vowels, gemination, etymology, and other factors. Foreign words are not always subject to the rules for spirantization.

The Syriac alphabet was added to the Unicode Standard in September, 1999 with the release of version 3.0.