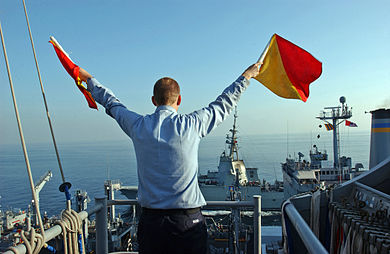 Flag semaphore (from the Greek σῆμα, sema, meaning sign and φέρω, phero, meaning to bear; altogether the sign-bearer) is the telegraphy system conveying information at a distance by means of visual signals with hand-held flags, rods, disks, paddles, or occasionally bare or gloved hands. Information is encoded by the position of the flags; it is read when the flag is in a fixed position. Semaphores were adopted and widely used (with hand-held flags replacing the mechanical arms of shutter semaphores) in the maritime world in the 19th century.[citation needed] It is still used during underway replenishment at sea and is acceptable for emergency communication in daylight or, using lighted wands instead of flags, at night.[citation needed]

The current flag semaphore system uses two short poles with square flags, which a signalman holds in different positions to signal letters of the alphabet and numbers. The signalman holds one pole in each hand, and extends each arm in one of eight possible directions. Except for in the rest position, the flags do not overlap. The flags are colored differently based on whether the signals are sent by sea or by land. At sea, the flags are colored red and yellow (the Oscar flag), while on land, they are white and blue (the Papa flag). Flags are not required; their purpose is to make the characters more obvious.[citation needed]

The following 30 semaphore characters are presented as they would appear when facing the signalman:

Numbers can be signaled by first signaling "Numerals". To change back to letters, a signalman would simply signal "J".

The combination used for オ ("O")

The Japanese merchant marine and armed services have adapted the flag semaphore system to the Japanese language, as shown in Japanese.[1] Because their writing system involves a syllabary of about twice the number of characters in the Latin alphabet, most characters take two displays of the flags to complete; others need three and a few only one.

The flags are specified as a solid white square for the left hand and a solid red one for the right. The display motions chosen are not like the "rotary dial" system used for the Latin alphabet letters and numbers; rather, the displays represent the angles of the brush strokes used in writing in the katakana syllabary and in the order drawn.

For example, the character for "O" [オ], which is drawn first with a horizontal line from left to right, then a vertical one from top to bottom, and finally a slant between the two; follows that form and order of the arm extensions. It is the right arm, holding the red flag, which moves as a pen would, but in mirror image so that the observer sees the pattern normally. As in telegraphy, the katakana syllabary is the one used to write down the messages as they are received.

Also, the Japanese system presents the number 0 by moving flags in a circle, and those from 1 through 9 using a sort of the "rotary dial" system, but different from that used for European languages.

Semaphore flags are also sometimes used as means of communication in the mountains where oral or electronic communication is difficult to perform. Although they do not carry flags, the Royal Canadian Mounted Police officers have used hand semaphore in this manner.

Some surf-side rescue companies, such as the Ocean City Maryland Beach Patrol, use semaphore flags to communicate between lifeguards.[2]

The letters of the flag semaphore are also a common artistic motif. One enduring example is the peace symbol, adopted by the Campaign for Nuclear Disarmament in 1958 from the original logo created by a commercial artist named Gerald Holtom from Twickenham, London.[3] Holtom designed the logo for use on a protest march on the Atomic Weapons Establishment at Aldermaston, near Newbury, England. On 4 April 1958, the march left Trafalgar Square for rural Berkshire, carrying Ban the Bomb placards made by Holtom's children making it the first use of the symbol. Originally, it was purple and white and signified a combination of the semaphoric letters N and D, standing for "nuclear disarmament," circumscribed by a circle.[4]

The album cover for the Beatles' 1965 album Help! was to have portrayed the four band members spelling "help" in semaphore, but the result was deemed aesthetically unpleasing, and their arms were instead positioned in a meaningless but aesthetically pleasing arrangement.[5]

Along with Morse code, flag semaphore has been portrayed in fiction as a method of communication amongst adventurous children, as with the Swallows and Amazons series of children's books by Arthur Ransome.[6]

In a satirical nod to the flag semaphore's enduring use into the age of the Internet, on April Fools' Day 2007 the Internet Engineering Task Force standards organization outlined the Semaphore Flag Signaling System, a method of transmitting Internet traffic via a chain of flag semaphore operators.[7]