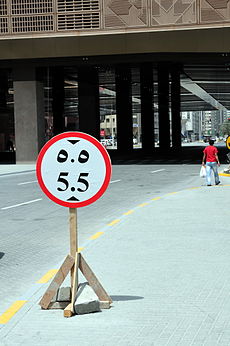 The system is based upon ten (originally nine) different glyphs. The symbols (glyphs) used to represent the system are in principle independent of the system itself. The glyphs in actual use are descended from Brahmi numerals and have split into various typographical variants since the Middle Ages.

The Hindu–Arabic system is designed for positional notation in a decimal system. In a more developed form, positional notation also uses a decimal marker (at first a mark over the ones digit but now more usually a decimal point or a decimal comma which separates the ones place from the tenths place), and also a symbol for "these digits recur ad infinitum". In modern usage, this latter symbol is usually a vinculum (a horizontal line placed over the repeating digits). In this more developed form, the numeral system can symbolize any rational number using only 13 symbols (the ten digits, decimal marker, vinculum, and a prepended dash to indicate a negative number).

Although generally found in text written with the Arabic abjad ("alphabet"), numbers written with these numerals also place the most-significant digit to the left, so they read from left to right. The requisite changes in reading direction are found in text that mixes left-to-right writing systems with right-to-left systems.

Various symbol sets are used to represent numbers in the Hindu–Arabic numeral system, most of which developed from the Brahmi numerals.

The symbols used to represent the system have split into various typographical variants since the Middle Ages, arranged in three main groups:

As in many numbering systems, the numbers 1, 2, and 3 represent simple tally marks; 1 being a single line, 2 being two lines (now connected by a diagonal) and 3 being three lines (now connected by two vertical lines). After three, numbers tend to become more complex symbols (examples are the Chinese numerals and Roman numerals). Theorists believe that this is because it becomes difficult to instantaneously count objects past three.[4]

Despite being described as the "Hindu–Arabic numeral system", the corpus incorporates elements from earlier: Egyptian (decimal system with a glyph for Zero), Babylonian (Positional notation), Hellenistic (ο/ō glyphs for Zero), and Chinese (notation for fractions) works; in addition to a mathematical methodology developed by Indian mathematicians, and in use extensively throughout India, before being adopted by Perso-Arabic mathematicians in Baghdad.

The Brahmi numerals at the basis of the system predate the Common Era. They replaced the earlier Kharosthi numerals used since the 4th century BC. Brahmi and Kharosthi numerals were used alongside one another in the Maurya Empire period, both appearing on the 3rd century BC edicts of Ashoka.[5]

Buddhist inscriptions from around 300 BC use the symbols that became 1, 4 and 6. One century later, their use of the symbols that became 2, 4, 6, 7 and 9 was recorded. These Brahmi numerals are the ancestors of the Hindu–Arabic glyphs 1 to 9, but they were not used as a positional system with a zero, and there were rather separate numerals for each of the tens (10, 20, 30, etc.).

The actual numeral system, including positional notation and use of zero, is in principle independent of the glyphs used, and significantly younger than the Brahmi numerals.

Singaporean historian of mathematics Lam Lay Yong (National University of Singapore) claims that the computation in Kitab al-Fusul fi al-Hisab al Hindi (925) by al-Uqlidisi, and another Latin translation of the Arab manuscript written by the Persian mathematician Khwarizmi (825), are completely identical to algorithms for square root extraction,[8] addition, subtraction,[9] multiplication and division[10] in the rod calculus described in Sunzi Suanjing, which was written five centuries earlier. Yong claims that these methods are too identical to be explained by independent development, and promotes a theory of Chinese origin of the Hindu-Arabic numerals.[11] 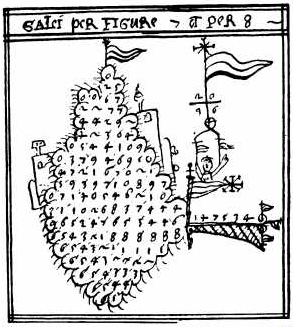 The "Galley" method of division.

The place-value system is used in the Bakhshali Manuscript. Although date of the composition of the manuscript is uncertain, the language used in the manuscript indicates that it could not have been composed any later than 400.[12] The development of the positional decimal system takes its origins in Hindu mathematics during the Gupta period. Around 500, the astronomer Aryabhata uses the word kha ("emptiness") to mark "zero" in tabular arrangements of digits. The 7th century Brahmasphuta Siddhanta contains a comparatively advanced understanding of the mathematical role of zero. The Sanskrit translation of the lost 5th century Prakrit Jaina cosmological text Lokavibhaga may preserve an early instance of positional use of zero.[13]

These Indian developments were taken up in Islamic mathematics in the 8th century, as recorded in al-Qifti's Chronology of the scholars (early 13th century).[14]

The numeral system came to be known to both the Perso-Arabic mathematician Khwarizmi, who wrote a book, On the Calculation with Hindu Numerals in about 825, and the Arab mathematician Al-Kindi, who wrote four volumes, On the Use of the Hindu Numerals (كتاب في استعمال العداد الهندي [kitāb fī isti'māl al-'adād al-hindī]) around 830. These earlier texts did not use the Hindu numerals. Kushyar ibn Labban who wrote Kitab fi usul hisab al-hind (Principles of Hindu Reckoning) is one of the oldest surviving manuscripts using the Hindu numerals.[15] These books are principally responsible for the diffusion of the Hindu system of numeration throughout the Islamic world and ultimately also to Europe.

The first dated and undisputed inscription showing the use of a symbol for zero appears on a stone inscription found at the Chaturbhuja Temple at Gwalior in India, dated 876.[16]

In 10th century Islamic mathematics, the system was extended to include fractions, as recorded in a treatise by Syrian mathematician Abu'l-Hasan al-Uqlidisi in 952–953.[17] 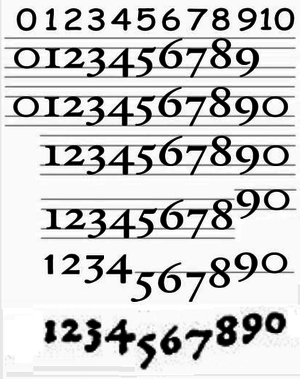 In Christian Europe, the first mention and representation of Hindu-Arabic numerals (from one to nine, without zero), is in the Codex Vigilanus, an illuminated compilation of various historical documents from the Visigothic period in Spain, written in the year 976 by three monks of the Riojan monastery of San Martín de Albelda. Between 967 and 969, Gerbert of Aurillac discovered and studied Arab science in the Catalan abbeys. Later he obtained from these places the book De multiplicatione et divisione (On multiplication and division). After becoming Pope Sylvester II in the year 999, he introduced a new model of abacus, the so-called Abacus of Gerbert, by adopting tokens representing Hindu-Arab numerals, from one to nine.

Leonardo Fibonacci brought this system to Europe. His book Liber Abaci introduced Arabic numerals, the use of zero, and the decimal place system to the Latin world. The numeral system came to be called "Arabic" by the Europeans. It was used in European mathematics from the 12th century, and entered common use from the 15th century to replace Roman numerals. Robert of Chester translated the Latin into English.[citation needed]

The familiar shape of the Western Arabic glyphs as now used with the Latin alphabet (0, 1, 2, 3, 4, 5, 6, 7, 8, 9) are the product of the late 15th to early 16th century, when they enter early typesetting. Muslim scientists used the Babylonian numeral system, and merchants used the Abjad numerals, a system similar to the Greek numeral system and the Hebrew numeral system. Similarly, Fibonacci's introduction of the system to Europe was restricted to learned circles. The credit for first establishing widespread understanding and usage of the decimal positional notation among the general population goes to Adam Ries, an author of the German Renaissance, whose 1522 Rechenung auff der linihen und federn was targeted at the apprentices of businessmen and craftsmen.

In AD 690, Empress Wu promulgated Zetian characters, one of which was "〇". The word is now used as a synonym for the number zero.

In China, Gautama Siddha introduced Hindu numerals with zero in 718, but Chinese mathematicians did not find them useful, as they had already had the decimal positional counting rods.[18][19]

In Chinese numerals, a circle (〇) is used to write zero in Suzhou numerals. Many historians think it was imported from Indian numerals by Gautama Siddha in 718, but some Chinese scholars think it was created from the Chinese text space filler "□".[18]

Spread of the Western Arabic variant 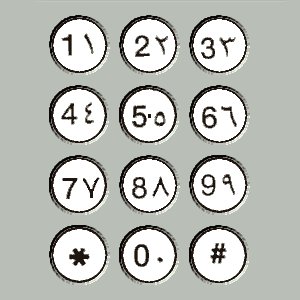 An Arab telephone keypad with both the Western "Arabic numerals" and the Arabic "Arabic–Indic numerals" variants.

The "Western Arabic" numerals as they were in common use in Europe since the Baroque period have secondarily found worldwide use together with the Latin alphabet, and even significantly beyond the contemporary spread of the Latin alphabet, intruding into the writing systems in regions where other variants of the Hindu–Arabic numerals had been in use, but also in conjunction with Chinese and Japanese writing (see Chinese numerals, Japanese numerals).