From Infogalactic: the planetary knowledge core
Jump to: navigation, search
For other uses, see Dolomite (disambiguation).

The Dolomites (Italian: Dolomiti [doloˈmiːti]; Ladin: Dolomites; German: Dolomiten [doːloːˈmɪtn̩]; Venetian: Dołomiti [doɰoˈmiti]: Friulian: Dolomitis) are a mountain range located in northeastern Italy. They form a part of the Southern Limestone Alps and extend from the River Adige in the west to the Piave Valley (Pieve di Cadore) in the east. The northern and southern borders are defined by the Puster Valley and the Sugana Valley (Italian: Valsugana). The Dolomites are nearly equally shared between the provinces of Belluno, South Tyrol and Trentino.

There are also mountain groups of similar geological structure that spread over the River Piave to the east – Dolomiti d'Oltrepiave; and far away over the Adige River to the west – Dolomiti di Brenta (Western Dolomites). There is also another smaller group called Piccole Dolomiti (Little Dolomites) located between the provinces of Trentino, Verona and Vicenza (see the map).

One national park and many other regional parks are located in the Dolomites. In August 2009, the Dolomites were declared a UNESCO World Heritage Site.

The Dolomites were originally known as the "pale mountains". The modern name was adopted in the 19th century in commemoration of the French mineralogist Déodat Gratet de Dolomieu (1750-1801), who was the first to describe the carbonate rock, dolomite, which is responsible for the mountains' characteristic shape and colour.

During the First World War, the line between the Italian and Austro-Hungarian forces ran through the Dolomites. There are now open-air war museums at Cinque Torri (Five Towers) and Mount Lagazuoi. Many people visit the Dolomites to climb the vie ferrate, protected paths created during the First World War. A number of long distance footpaths run across the Dolomites, which are called "alte vie" (i.e., high paths). Such long trails, which are numbered from 1 to 8, require at least a week to be walked through and are served by numerous "Rifugi" (huts). The first and, perhaps, most renowned is the Alta Via 1.

The region is commonly divided into the Western and Eastern Dolomites, separated by a line following the Val Badia – Campolongo Pass – Cordevole Valley (Agordino) axis.

Based on current classifications, the Dolomites may be divided into the following ranges:

A tourist mecca, the Dolomites are famous for skiing in the winter months and mountain climbing, hiking, cycling, and BASE jumping, as well as paragliding and hang gliding in summer and late spring/early autumn.[citation needed] Free climbing has been a tradition in the Dolomites since 1887, when 17-year-old Georg Winkler soloed the first ascent of the pinnacle Die Vajolettürme.[1] The main centres include: Rocca Pietore alongside the Marmolada Glacier, which lies on the border of Trentino and Veneto, the small towns of Alleghe, Falcade, Auronzo, Cortina d'Ampezzo and the villages of Arabba, Urtijëi and San Martino di Castrozza, as well as the whole of the Fassa, Gardena and Badia valleys.

Other characteristic places are: 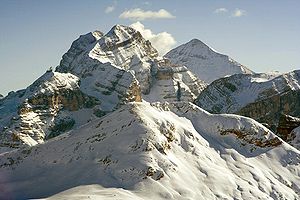 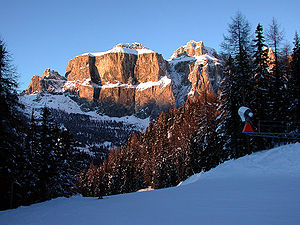 Winter view of the Sella Group 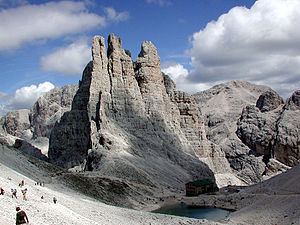 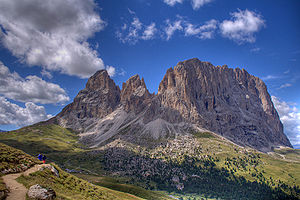 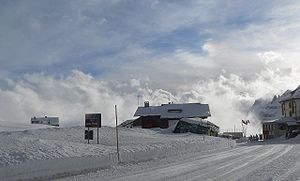 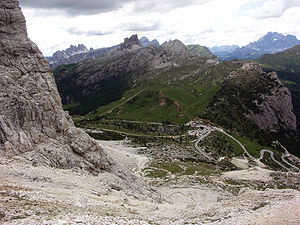 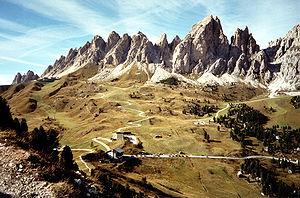 360° panoramic view from Marmolada, highest peak in the Dolomites