From Infogalactic: the planetary knowledge core
Jump to: navigation, search
This article is about the ancient city. For the modern village nearby, see Paestum (frazione). 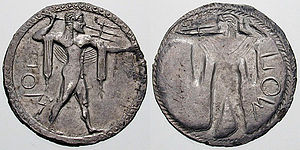 Nomos of Poseidonia, c. 530–500 BC. Poseidon is seen wielding a trident with a chlamys draped over his arms. 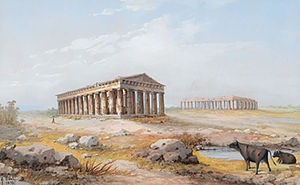 Paestum was a major ancient Greek city on the coast of the Tyrrhenian Sea in Magna Graecia. After its foundation by Greek colonists under the name of Poseidonia (Ancient Greek: Ποσειδωνία) it was eventually conquered by the Lucanians and later the Romans. The Lucanians renamed it to Paistos and the Romans gave the city its current name.[1] The ruins of Paestum are notable for their three ancient Greek temples which are in a very good state of preservation. Today the remains of the city are found in the modern frazione of the same name, which is part of the comune of Capaccio in the Province of Salerno, Campania, Italy.

According to Strabo the city was founded as Poseidonia by Greek Achaeans from Sybaris. The colonists had built fortifications close to the sea, but then decided to found the city further inland at a higher elevation.[2] The fortifications might have been built to the south of Poseidonia on the promontory where Agropoli is now. According to the historical tradition the sanctuary to Poseidon was located there, after which the city would have been named. The date of Poseidonia's founding is not given by ancient sources, but the archaeological evidence gives a date of approximately 600 BC.[3]

Alternatively, the Sybarites may in fact have been Troezenians. Aristotle wrote that a group of Troezenians was expelled from Sybaris by the Achaeans after their joint founding of that city.[4] Gaius Julius Solinus calls Paestum a Dorian colony[5] and Strabo mentions that Troezen was once called Poseidonia.[6] As a consequence it has been argued that Paestum was founded by the Troezenians referred to by Aristotle.[7] Another hypothesis is that the Sybarites were aided by Dorians in their founding of Poseidonia.[3]

Archaeological evidence from Paestum's first centuries indicates the building of roads, temples and other features of a growing city. Coinage, architecture and molded votive figurines all attest to close relations maintained with Metaponto in the sixth and fifth centuries.[citation needed]

It is assumed that Poseidonia harbored refugees from its mother city Sybaris when that city was conquered by Croton in 510 BC. In the early fifth century, Poseidonia's coins adopted the Achaean weight standard and the bull seen on Sybarite coins. A. J. Graham thinks it was plausible that the number of refugees was large enough for some kind of synoecism to have occurred between the Poseidonians and the Sybarites, possibly in the form of a sympolity.[8]

Poseidonia might have had a major share in a new foundation of Sybaris which lasted from 452/1 BC until 446/5 BC. This is suggested by the great resemblance of the coins of Sybaris to those of Poseidonia in this period. Possibly a treaty of friendship between Sybaris, its allies and the Serdaioi (an unknown people) dates to this new foundation, because Poseidonia was the guarantor of this treaty.[9][10]

It is not until the end of the fifth century BC that the city is mentioned, when according to Strabo the city was conquered by the Lucanians. From the archaeological evidence it appears that the two cultures, Greek and Oscan, were able to thrive alongside one another.

What is known is it later became the Roman city of Paestum in 273 BC after the Graeco-Italian Poseidonians sided with the loser, king Pyrrhus of Epirus, in his war against republican Rome during the first quarter of the third century BC.

During the Carthagian invasion of Italy by Hannibal, the city remained faithful to Rome and afterwards was granted special favours such as the minting of its coinage. The city continued to prosper during the Roman imperial period, and became a bishopric as Roman Catholic Diocese of Pesto around 400 AD.

It started to go into decline between the 4th and 7th centuries, was abandoned during the Middle Ages and was suppressed as a diocese in 1100. The decline and desertion were probably due to changes in local land drainage patterns, leading to swampy malarial conditions.

Its ruins only came to notice again in the 18th century, following the rediscovery of the Roman cities of Pompeii and Herculaneum.

On September 9, 1943, Paestum was the location of the landing beaches of the U.S. 36th Infantry Division during the Allied invasion of Italy. German forces resisted the landings from the outset, causing heavy fighting within and around the town. Combat persisted around the town for nine days before the Germans withdrew to the north. 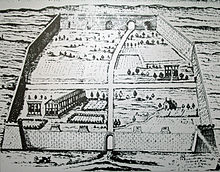 Map of Paestum by Costantino Gatta, 1732.

The main features of the site today are the standing remains of three major temples in Doric style, dating from the first half of the 6th century BC. These were dedicated to Hera and Poseidon, although they have traditionally been identified as a basilica and temples of Neptune and Ceres, owing to 18th-century mis-attribution.

The city of Paestum covers an area of approximately 120 hectares. It is only the 25 hectares that contain the three main temples that have been excavated. The other 95 hectares remain on private land and have not been excavated. The city is surrounded by defensive walls that still stand. The walls are approximately 4750 m long, 5 – 7 m thick and 15 m high. Positioned along the wall are 24 square and round towers. There may have been up to 28 but some of them were destroyed during the construction of highway in the 18th century that effectively cuts the site in two.

The modern town of Paestum, directly to the south of the archaeological site, is a popular seaside resort. In the region of Paestum there are long, sandy beaches.

The first Temple of Hera, built around 600 BC by Greek colonists, is the oldest surviving temple in Paestum. Eighteenth-century archaeologists named it "The Basilica" because they mistakenly believed it to be a Roman building. A basilica in Roman times was a civil building, not a religious one. Inscriptions revealed that the goddess worshiped here was Hera. Later, an altar was unearthed in front of the temple, in the open-air site usual for a Greek altar; the faithful could attend rites and sacrifices without entering the cella.

Just south of the city walls, at a site still called Santa Venera, a series of small terracotta offertory molded statuettes of a standing female nude wearing the polos headdress of Anatolian and Syrian goddesses, which were dated to the first half of the sixth century BC, were found in the sanctuary; other similar ones have been excavated at other Paestum sanctuaries during excavations in the 1980s, but the figure is highly unusual in the Western Mediterranean.[12] The open-air temenos was established at the start of Greek occupation: a temple on the site was not built until the early fifth century. A nude goddess is a figure alien to Greek culture before Praxiteles' famous Cnidian Aphrodite in the fourth century: iconographic analogies must be sought in Phoenician Astarte and the Cypriote Aphrodite. "In places where the Greeks and Phoenicians came in contact with one another, there is often an overlapping in the persona of the two deities," Rebecca Miller Ammerman has explained (Ammerman 1991), in identifying the cult at the site as that of Phoenician Astarte or Cypriot Aphrodite. In Roman times, inscriptions make clear, the cult was reserved to Venus. 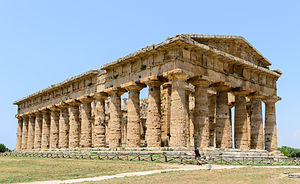 The second Temple of Hera was built around 460–450 BC. It has been variously thought of as a temple dedicated to Poseidon. The Temple of Hera II has nothing in common with the first temple, reason being for its symmetrical style for its columns. Also every column does not have a normal 20 flutes on each column but it has 24 flutes. The Temple of Hera II also has a wider column and a smaller spacing for the placing of the columns. The temple was also found to be used to worship more than just Hera but also Zeus and another unknown god. There's a legend where beings would go to the temple in hope to make love with the goddess and the belief on insuring pregnancy; Hera is also the goddess of childbirth. There are visible on the east side the remains of two altars, one large and one smaller. The smaller one is a Roman addition, built when they cut through the larger one to build a road to the forum. It is also possible that the temple was originally dedicated to both Hera and Poseidon; some offertory statues found around the larger altar are thought to demonstrate this identification.

In the central part of the complex is the Roman Forum, thought to have been built on the site of the preceding Greek agora. On the north side of the forum is a small Roman temple, dated to 200 BC. It was dedicated to the Capitoline Triad, Jupiter, Juno and Minerva.

To the north-east of the forum is the amphitheater. This is of normal Roman pattern, though much smaller than later examples. Only the western half is visible; in 1930 AD, a road was built across the site, burying the eastern half. It is said by local inhabitants that the civil engineer responsible was tried, convicted and received a prison sentence for what was described as wanton destruction of an historic site. 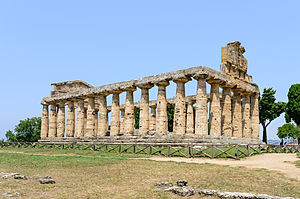 On the highest point of the town, some way from the other temples, is the Temple of Athena. It was built around 500 BC, and was for some time incorrectly thought to have been dedicated to Ceres. The architecture is transitional, being partly in the Ionic style and partly early Doric. Three medieval Christian tombs in the floor show that the temple was at one time used as a Christian church.

All three temples have undergone some renovation and repair in recent years.

Paestum is also renowned for its painted tombs, mainly belonging to the period of the Lucanian rule, while only one of them dates to the Greek period. It was found, on 3 June 1968, in a small necropolis some 1.5 km south of the ancient walls. The burial monument was named Tomb of the Diver (Italian: Tomba del tuffatore) after the enigmatic scene, depicted on the covering slab, of a lonely young man diving into a stream of water. It was dated to the first half of the fifth century BC (about 470 BC), the Golden Age of the Greek town. The tomb is painted with the true fresco technique and its importance lies in being "the only example of Greek painting with figured scenes dating from the Orientalizing, Archaic, or Classical periods to survive in its entirety. Among the thousands of Greek tombs known from this time (roughly 700–400 BC), this is the only one to have been decorated with frescoes of human subjects."[13]

The symposium on the north wall.

The remaining four walls of the tombs are occupied by symposium related scenes, an iconography far more familiar from the Greek pottery than the diving scene.

All the five frescoes are visible in the local National Museum, together with the cycle of Lucanian painted tombs.