Elizabeth Shippen Green (September 1, 1871 – 1954) was an American illustrator. She illustrated children's books and worked for publications such as Ladies' Home Journal, The Saturday Evening Post and Harper's Magazine.

Green enrolled at the Pennsylvania Academy of the Fine Arts in 1887 and studied with the painters Thomas Pollock Anshutz, Thomas Eakins, and Robert Vonnoh.[1] She then began study with Howard Pyle at Drexel Institute where she met Violet Oakley and Jessie Willcox Smith.[2]

As educational opportunities were made more available in the 19th-century, women artists became part of professional enterprises, including founding their own art associations. Artwork made by women was considered to be inferior, and to help overcome that stereotype women became “increasingly vocal and confident” in promoting women's work, and thus became part of the emerging image of the educated, modern and freer “New Woman”.[3] Artists "played crucial roles in representing the New Woman, both by drawing images of the icon and exemplifying this emerging type through their own lives.” In the late 19th-century and early 20th century about 88% of the subscribers of 11,000 magazines and periodicals were women. As women entered the artist community, publishers hired women to create illustrations that depict the world through a woman's perspective. Other successful illustrators were Jennie Augusta Brownscombe, Jessie Willcox Smith, Rose O'Neill, and Violet Oakley.[4]

Green was a member of Philadelphia's The Plastic Club, an organization established to promote "Art for art's sake". Other members included Elenore Abbott, Jessie Willcox Smith, and Violet Oakley.[5] Many of the women who founded the organization had been students of Howard Pyle. It was founded to provide a means to encourage one another professionally and create opportunities to sell their works of art.[5][6]

She was publishing before she was eighteen and began making pen and ink drawings and illustrations for St. Nicholas Magazine, Woman's Home Companion, and The Saturday Evening Post. In 1901, she signed an exclusive contract with Harper's Monthly.[7] Green was also a book illustrator.[7]

In 1905, Green won the Mary Smith Prize at the annual Pennsylvania Academy of the Fine Arts exhibition.[8] In 1994, she was elected posthumously to the Society of Illustrators' Hall of Fame.[9] 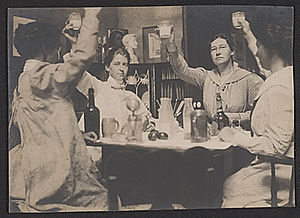 Green became close and lifelong friends with Oakley and Smith. They lived together first at the Red Rose Inn (they were called the Red Rose girls by Pyle) and later at Cogslea, their home in the Mount Airy neighborhood of Philadelphia.[10]

In 1911, at the age of forty, Green married Huger Elliott, an architecture professor, after a five-year engagement, and moved away from Cogslea.[1] Green continued to work through the 1920s and illustrated a nonsense verse alphabet with her husband.[7] Green died in 1954.[7]