Jonathan Charles Palmer (born 7 November 1956)[1][2] is a British former Formula One racing driver, medical doctor, and now the majority shareholder and chief executive of MotorSport Vision, whose portfolio includes the Brands Hatch circuit in Kent, England, the PalmerSport corporate driving event at Bedford Autodrome in England, and the rights to the British Superbike Championship.

Educated at Brighton College, Palmer dovetailed his medical studies at Guy's Hospital with club racing in an Austin Healey Sprite and Marcos. He practised as a doctor at Cuckfield and Brighton hospitals before opting for a driving career after Formula Ford success in 1978–80. Progressing to Formula Three, he won the 1981 British Formula 3 Championship, next achieving international single-seater success as 1983 European Formula Two Champion. His rapid ascent through the ranks landed him a Williams Formula One test drive in 1982 and BRDC Gold Star the following year. 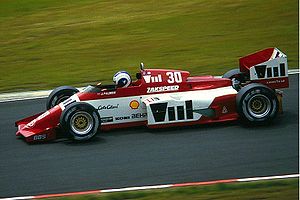 Palmer driving for Zakspeed at the 1985 German Grand Prix.

Palmer made his F1 debut at Brands Hatch on 25 September 1983, driving for the Williams team in the European Grand Prix. Signing up for the Skoal Bandit RAM March team in 1984, he scored several top ten finishes, before a move to the Zakspeed team for the following two seasons.

A switch to Ken Tyrrell's outfit for the 1987 season brought about a change of fortune. The normally aspirated, Cosworth-powered Tyrrell was outpaced by turbocharged cars but reliable and nimble on tighter circuits and Palmer took it to a string of points finishes, culminating in a career best of fourth in Australia. He won the Jim Clark Cup, a championship for drivers of non-turbocharged machines. Prior to the 1987 season Palmer was also in talks with McLaren boss Ron Dennis about becoming the team's No. 2 driver to dual World Champion Alain Prost. Ultimately Dennis chose former Ferrari driver Stefan Johansson for 1987 and it was not until a week before the opening race in Brazil that Palmer managed to sign a contract with Tyrrell.

Palmer stayed with the Tyrell team for the following two seasons before signing for McLaren at the end of 1989 as the team's test driver, alongside Ayrton Senna and Gerhard Berger. Palmer's work for McLaren included development of the McLaren F1 road car, which included a then record-breaking 231 mph run at the Nardo test track.[3] His road car development work also includes a special edition Caterham 7 JPE, an extreme variant of the enduring sportscar.

In addition to his F1 career, Palmer competed with success in the World Sportscar Championship alongside many other Grand Prix drivers. Racing a Group C Porsche from 1983 to 1990, highlights included victory in the 1984 1000 km of Brands Hatch, and second place in the 1985 24 Hours of Le Mans. He returned to Le Mans in 1991 with the works Sauber Mercedes-Benz team.

A season in the British Touring Car Championship for the Prodrive BMW team followed in 1991 but by now Palmer's main focus was on his business interests with the formation of PalmerSport, which specialises in corporate driving activities. In addition Palmer had joined the BBC F1 commentary team as a pitlane reporter and, following the sudden death of James Hunt from a heart attack shortly after the 1993 Canadian Grand Prix, Palmer was promoted to the commentary box alongside Murray Walker. The partnership lasted until the end of the 1996 season, when the BBC lost the rights to broadcast F1. Palmer then joined the CBC for annual commentary of the Grand Prix of Canada, starting in 1997. The other races used the ITV commentary on TSN.

The same year Palmer acquired the lease to develop Bedford Autodrome. Opening in 1999, this has four separate circuits and six miles of track, and is used for trackdays and testing in addition to the PalmerSport corporate driving activity. This coincided with further business ventures, including the launch of the Formula Palmer Audi Championship, which provided a lower cost alternative to Formula 3. Inaugural 1998 champion Justin Wilson won a fully funded season in Formula 3000 and with Palmer managing his career, a then-unique share issue in the driver was launched after he won the F1 feeder formula, helping him to secure a drive with the Minardi team. Formula Palmer Audi has also helped shape the careers of many drivers, including triple World Touring Car Champion Andy Priaulx.

In 2004 Palmer, along with business partners John Britten and Sir Peter Ogden acquired the Brands Hatch, Oulton Park, Snetterton and Cadwell Park circuits from Octagon, under the umbrella of MotorSport Vision (MSV). The company, of which Palmer is Chief Executive, also co-ordinated and ran the Formula Palmer Audi Championship, before acquiring the commercial rights for the British Superbike Championship in 2008 and, in the same year, successfully tendering to operate the FIA Formula Two Championship. In addition, MSV introduced and runs the BRDC Formula 4 Championship, an affordable and competitive single-seater series for young career drivers; administers several club series and championships under the MSVR banner; and organises trackdays as MSV Trackdays.

In addition to his business interests, Palmer has also helped develop the racing careers of his two sons: Jolyon Palmer is a race winner and GP2 Series champion and aims to follow in his father's footsteps into F1, whilst William is also winning races in his first full season in the BRDC F4 Championship.