The McLaren M23 was a Formula One racing car designed by Gordon Coppuck, with input from John Barnard, and built by the McLaren team. It was a development of the McLaren M16 Indianapolis 500 car. A Ford Cosworth DFV engine was used, which was prepared by specialist tuning company Nicholson-McLaren Engines. This helped push the DFV's horsepower output to around 490 bhp. 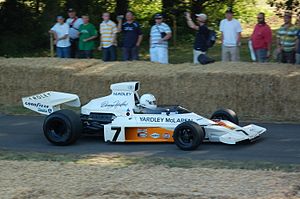 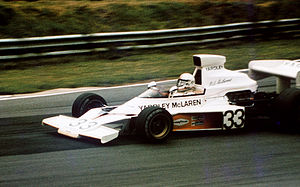 Mike Hailwood driving a Yardley-liveried McLaren M23 at Brands Hatch in 1974
File:McLaren M23 without bodywork.jpg
A McLaren M23 with much of its bodywork and front wing removed, Cosworth DFV visible in the rear. Note the exposed pedals between the front wheels and minimal upper-body crash protection, very different from today's F1 cars.

It was introduced for the 1973 season, and scored pole position with Denny Hulme on its very first outing. Hulme and Peter Revson took three wins between them that season, while rookie Jody Scheckter nearly added a fourth. Scheckter was responsible for one of the biggest accidents Formula One has ever seen, at the 1973 British Grand Prix, when he spun his M23 in front of the pack. Emerson Fittipaldi joined McLaren from Lotus in 1974. His knowledge of the Lotus 72 helped McLaren develop the M23 and that season Fittipaldi gave McLaren its first drivers' and constructors' world championships, beating Ferrari, Tyrrell and Lotus.

Further development in 1975 – including a 6-speed gearbox, a novelty for the time – helped Fittipaldi to second in the drivers' championship behind Niki Lauda, who had the benefit of Ferrari's 312T chassis and McLaren to third in the constructors' championship, behind Ferrari and Brabham. The team experimented with different bodywork styles, including aerodynamic kickups in front of the rear wheels, different nose profiles and extended bodywork in front of the rear wheels, housing the oil coolers. Most of these changes were adopted for the M23 and its successor, the McLaren M26. At the end of 1975 Fittipaldi left the team to join his brother's Copersucar-sponsored Fittipaldi Automotive team. He was replaced by James Hunt, who went on to win a dramatic and controversial 1976 season with the final evolution M23, the M23D.

When the replacement McLaren M26 proved troublesome, Hunt and Jochen Mass relied on the M23 in the early part of the 1977 season, and even though the car was now four years old it was still competitive.

The M23 was never the most technically advanced F1 car, but sound preparation and continual development helped it win 16 Grands Prix, two drivers' and one constructors' world championships in its lifetime.

The M23 was also modified for use in Formula 5000 racing. Australian driver John McCormack drove a Leyland powered M23 to win the 1977 Australian Drivers' Championship. McCormack also put his M23 on pole for the 1978 Australian Grand Prix.