The 2001 Tour de France was a multiple stage bicycle race held from 7 July to 29 July 2001, and the 88th edition of the Tour de France. It has no overall winner—although American cyclist Lance Armstrong originally won the event, the United States Anti-Doping Agency announced in August 2012 that they had disqualified Armstrong from all his results since 1998, including his seven Tour de France wins from 1999–2005. The verdict was subsequently confirmed by the Union Cycliste Internationale.

The race included a 67-km long team time trial, two individual time trials and five consecutive mountain-top finishing stages, the second of which was the Chamrousse special category climb time trial. Thus, all the high-mountain stages were grouped consecutively, following the climbing time trial, with one rest day in between. France was ridden 'clockwise', so the Alps were visited before the Pyrenees. The Tour started in France but also visited Belgium in its first week. The ceremonial final stage finished at the Champs-Élysées in Paris, as is tradition. Erik Zabel won his record sixth consecutive points classification victory.

The organisers felt that the 2000 Tour de France did not include not enough French teams and consequently changed the selection procedure as follows.[2]

There was also a mountains classification. The organisation had categorized some climbs as either hors catégorie, first, second, third, or fourth-category; points for this classification were won by the first cyclists to reach the top of these climbs, with more points available for the higher-categorized climbs. The cyclist with the most points lead the classification and was identified with a polkadot jersey.[5]

For the team classification, the times of the best three cyclists per team on each stage were added; the leading team was the team with the lowest total time.[6]

On 24 August 2012, the United States Anti-Doping Agency announced that they had disqualified Armstrong from all his results since 1998, including his victory in the 2001 Tour de France. The Union Cycliste Internationale, responsible for the international cycling, upheld the verdict on October 22, 2012. Organizers of the Tour de France announced that the winner's slot would remain empty in the record books. 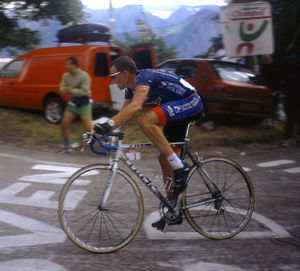 Lance Armstrong riding to his now-negated victory at Alpe d'Huez

In August 2012, the United States Anti-Doping Agency recommended the disqualification of Lance Armstrong from all his results since 1998; in October 2012, the Union Cycliste Internationale agreed to this action. Having been stripped of the win owing to his use of banned substances, Armstrong's win, his third of 7 consecutive wins and the most in Tour history, no longer applies; therefore, there was no official winner of the 2001 Tour De France.