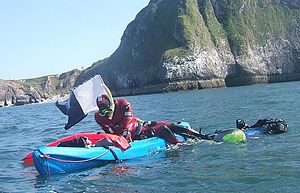 Diver climbing back onto kayak

Kayak diving is a type of recreational diving where the divers paddle to a diving site in a kayak carrying all their gear to the place they want to dive.

The range can be up to several kilometres along the coastline from the launching point to a place where access would be difficult from the shore, although the sea is sheltered. It is a considerably cheaper alternative to using a powered boat, as well as combining the experience of sea kayaking at the same time.

Kayak diving gives the diver independence from dive boat operators, while allowing dives at sites which are too far to comfortably swim, but are sufficiently sheltered.

Other advantages of kayak diving include:[1]

Kayak diving has been done in southern California since at least the mid-1990s.[2][3]

More recently it has been exported to other countries :

- New Zealand,[4] - and to a very limited extent the United Kingdom,[5] where it remains rare. - One couple has been Kayak diving in Sabah, North Borneo, Malaysia since 2008 with members of the Piasau Divers club. Several dives have been made in and around the islands of the Tunku Abdul Rahman marine park. It was found that a dive-yak was perfect for diving and snorkelling. Especially since as an inflatable it could be deflated, brought by speedboat out to the further islands and then inflated and left to dive and kayak their way back home.

On reaching a dive site the lead kayak drops an anchor, and the other kayaks tie on to the back or use separate anchors. The divers put air into the buoyancy compensator attached to their diving cylinders and then push them overboard so they float while remaining tethered to the kayak by a bungee cord. Then they put on their weight belts, slide overboard, and climb into their jackets while floating. In places where the visibility is less than excellent it is important to use a diving reel to find the way back to the anchor, because usually there is no boat handler on the surface to pick up the parties if they surface elsewhere. Alternatively one of the party carries the anchor during the dive.

Getting into the kayak is the reverse of getting off. It is relatively easy to climb onto them from the side as the freeboard is low, but they are not very stable and are easy to capsize. The diver's weights are usually removed first and secured on the boat. Other loose equipment may be loaded at this stage. The scuba set is removed and clipped to a tether. Sufficient air to float the set must be in the buoyancy compensator. The fins are kept on the feet as they are used to boost the diver onto the kayak. Boarding is usually done by holding onto the kayak and using the fins to get roughly horizontal at right angles to the boat, then boosting over the kayak so that the hips are over the cockpit, face down, then rolling face up and sitting before swinging the legs onto the boat.[1]

The scuba set can then be carefully hoisted out of the water and stowed. Most divers will probably have to adjust their position for this maneuver.

Kayaks suitable for diving are available in a range of styles. Single seaters and tandems. Long, narrow boats track better, are faster and less effort to paddle, but can be clumsy in surf. Shorter, wider boats are more stable and maneuverable, and can be easier to manage in surf, but usually carry less weight.[1]

Sit-on-top kayaks are usually chosen for diving. Inflatable or rigid, they are generally relatively wide, and therefore provide greater stability, which is important when loading or unloading dive gear, and for boarding from the water. A moulded cargo well behind the cockpit is suitable for carrying the scuba set. This is provided with straps to secure the gear. Sealed hatches can provide storage space for other equipment, or it can be carried in another moulded cargo well in a bag or net. Some hatches are large enough to store an extra cylinder.[1] A paddle is required, and is usually tethered to the boat so it can't be lost. Optional backrests can make paddling more comfortable.

A VHF radio or cell phone may be carried to call for help in case of an emergency, a hand-held sonar "fishfinder" can be used to show the bottom contour of the site and a hand held GPS may be used to navigate to and from the site.[1]

An anchor may be used to moor the kayak during the dive, or if conditions allow, the kayak may be towed as a large surface marker buoy.

Until the late 2000s a purpose built inflatable dive kayak was built by "Sevylor". This came in two models - a single and double. The single was 0.8m in width and the double wider and more stable at 1m. The Diveyak was an excellent boat[citation needed] and could easily carry two divers and gear in an extremely stable platform that was simple to dive from and very rugged.

Today many fishing kayaks are available that have the stability and buoyancy to act as diving kayaks. An example is "Finn", a small manufacturer in Perth, Australia. "Feelfree" and other brands also make suitable kayaks.

An outrigger can be light and makes the kayak much more stable. This is an advantage when boarding from the water and when pulling tanks back on board.

Most kayak diving is close to the coast at distances that would be easy to shore-dive had there been reasonable shore access.

It is important to fly a 'diver down flag' while diving to indicate that it is not an abandoned kayak and that there are divers underwater. In the UK, with its low water temperatures, strong tidal currents and bad weather, an empty boat at sea is likely to be reported to HM Coastguard by experienced and responsible seafarers as a sign of a possible life-threatening emergency.[6] As it is the Coastguard's duty to investigate such reports, they may order a search of the area by an RNLI lifeboat or Coastguard helicopter.[7][8] To reach a minimum level of safety when boat diving, a capable person should be left on the surface at the dive site while divers are underwater, to start a rescue and operate a marine VHF radio to raise the alarm in the event of a diving accident.[9][10]