The Cold War was the continuing state from roughly 1946 to 1991 of political conflict, military tension, proxy wars, and economic competition between the Communist World – primarily the Soviet Union and its satellite states and allies – and the powers of the Western world, primarily the United States, the United Kingdom and its allies (i.e. NATO.) Although the chief military forces never engaged in a major battle with each other, they expressed the conflict through military coalitions, strategic conventional force deployments, extensive aid to states deemed vulnerable, proxy wars, espionage, propaganda, conventional and nuclear arms races, appeals to neutral nations, rivalry at sports events, and technological competitions such as the Space Race.

For a broader overview, read more... 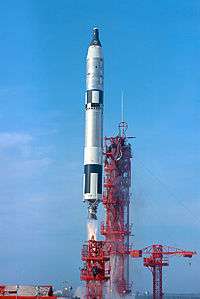 The Space Race was an informal competition between the United States and the Soviet Union that lasted roughly from 1957 to 1975. It involved the parallel efforts by each of those countries to explore outer space with artificial satellites, to send humans into space, and to land people on the Moon.

Though its roots lie in early rocket technology and in the international tensions following World War II, the Space Race effectively began after the Soviet launch of Sputnik 1 on 4 October 1957. The term originated as an analogy to the arms race. The Space Race became an important part of the cultural and technological rivalry between the USSR and the United States during the Cold War. Space technology became a particularly important arena in this conflict, both because of its potential military applications and due to the morale-boosting psychological benefits.

After World War II, the United States and the Soviet Union became locked in a bitter Cold War of espionage and propaganda. Space exploration and satellite technology could feed into the cold war on both fronts. Satellite-borne equipment could spy on other countries, while space-faring accomplishments could serve as propaganda to tout a country's scientific prowess and military potential. The same rockets that might send a human into orbit or hit a specific spot on the Moon could send an atom bomb to a specific enemy city. Much of the technological development required for space travel applied equally well to wartime rockets such as Intercontinental ballistic missiles (ICBMs). Along with other aspects of the arms race, progress in space appeared as an indicator of technological and economic prowess, demonstrating the superiority of the ideology of that country. Space research had a dual purpose: it could serve peaceful ends, but could also contribute to military goals.

The two superpowers each worked to gain an edge in space research, neither knowing who might make a breakthrough first. They had each laid the groundwork for a race to space, and awaited only the starter's gun. (More...) Template:/box-footer

Two opposing geopolitical blocs had developed by the 1960s as a result of the Cold War. Consult the legend on the map for more details.

Igor Gouzenko (1919-1982) was a cipher clerk for the Soviet Embassy to Canada in Ottawa, Ontario. He defected on September 5, 1945 with 109 documents on Soviet espionage activities in the West.

Gouzenko's defection exposed Joseph Stalin's efforts to steal nuclear secrets, and the then-unknown technique of planting sleeper agents. With World War II over, the "Gouzenko Affair" helped change western perceptions of the Soviet Union from an ally to an enemy, and is often credited as a triggering event of the Cold War. [1]

The evidence provided by Gouzenko led to the arrest in Canada of a total of 39 suspects, of which 18 were eventually convicted, including Fred Rose, the only Communist Member of Parliament in the Canadian House of Commons and Sam Carr, the Communist Party's national organizer. A Royal Commission of Inquiry, headed by Justice Robert Taschereau and Justice Roy Kellock was conducted into the Gouzenko Affair and his evidence of a Soviet spy ring in Canada. Even more importantly it alerted other countries around the world, such as the United States and the United Kingdom, that Soviet agents had almost certainly infiltrated their nations as well. (More...) Template:/box-footer

Template:/box-header Because the number of works for the Cold War is large, a separate page has been created.