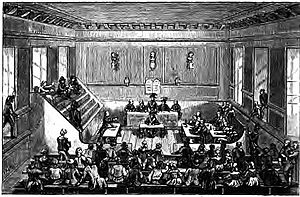 The Revolutionary Tribunal (French: Tribunal révolutionnaire) was a court which was instituted in Paris by the Convention during the French Revolution for the trial of political offenders, and eventually became one of the most powerful engines of the Reign of Terror.

The news of the failure of the French arms in the Austrian Netherlands gave rise in Paris to popular movements on 9 and 10 March 1793, and on 10 March, on the proposal of Danton, the Convention decreed that there should be established in Paris an extraordinary criminal tribunal, which received the official name of the Revolutionary Tribunal by a decree of 20 October 1793.

It was composed of a jury, a public prosecutor, and two substitutes, all nominated by the Convention; and from its judgments there was no appeal. With M.J.A. Herman as president and Fouquier-Tinville as public prosecutor, the tribunal terrorized the royalists, the refractory priests and all the actors in the counter-revolution.

Soon, too, it came to be used for personal ends, particularly by Robespierre, who employed it for the condemnation of his adversaries[citation needed]. The excesses of the Revolutionary Tribunal increased with the growth of Robespierre's ascendancy in the Committee of Public Safety; and on 10 June 1794 was promulgated, at his instigation, the infamous Law of 22 Prairial, which forbade prisoners to employ counsel for their defence, suppressed the hearing of witnesses and made death the sole penalty.[1] Before 22 Prairial the Revolutionary Tribunal had pronounced 1,220 death-sentences in thirteen months; during the forty-nine days between the passing of the law and the fall of Robespierre 1,376 persons were condemned (an average of 28 per day), including many innocent victims.

The lists of prisoners to be sent before the tribunal were prepared by a popular commission sitting at the museum, and signed, after revision, by the Committee of General Security and the Committee of Public Safety jointly. Although Robespierre was the principal purveyor of the tribunal, we possess only one of these lists bearing his signature. The Revolutionary Tribunal was suppressed on 31 May 1795. Among its most celebrated victims may be mentioned Marie Antoinette, the Hebertists, the Dantonists and several of the Girondists. Similar tribunals were also in operation in the various French departments.