War of the First Coalition

The War of the First Coalition (1792–1797) was the first major effort of multiple European monarchies to defeat Revolutionary France. France declared war on the Habsburg monarchy of Austria on 20 April 1792, and the Kingdom of Prussia joined the Austrian side a few weeks later.

These powers initiated a series of invasions of France by land and sea, with Prussia and Austria attacking from the Austrian Netherlands and the Rhine, and Great Britain supporting revolts in provincial France and laying siege to Toulon. France suffered reverses (Battle of Neerwinden, 18 March 1793) and internal strife (Revolt in the Vendée), and responded with extreme measures: the Committee of Public Safety formed (6 April 1793) and the levée en masse drafted all potential soldiers aged 18 to 25 (August 1793). The new French armies counter-attacked, repelled the invaders, and moved beyond France. French arms established the Batavian Republic as a satellite state (May 1795) and gained the Prussian Rhineland by the first Treaty of Basel. With the Treaty of Campo Formio, the Holy Roman Empire ceded the Austrian Netherlands to France and Northern Italy was turned into several French "Sister Republics". Spain made a separate peace accord with France (Second Treaty of Basel) and the French Directory carried out plans to conquer more of the Holy Roman Empire of the German Nation (Germany and Austria).

North of the Alps, Archduke Charles of Austria redressed the situation in 1796, but General Bonaparte carried all before him against Sardinia and Austria in northern Italy (1796–1797) near the Po Valley, culminating in the peace of Leoben and the Treaty of Campo Formio (October 1797). The First Coalition collapsed, leaving only Britain in the field fighting against France.

As early as 1791 the other monarchies of Europe watched with alarm the developments in France, and considered whether they should intervene, either in support of Louis XVI or to take advantage of the chaos in France. The key figure, the Holy Roman Emperor Leopold II, brother to the French Queen Marie Antoinette, had initially looked on the Revolution calmly. He became more and more disturbed as the Revolution became more radical, although he still hoped to avoid war. On 27 August 1791, Leopold and King Frederick William II of Prussia, in consultation with emigrant French nobles, issued the Declaration of Pillnitz, which declared the interest of the monarchs of Europe in the well-being of Louis and his family, and threatened vague but severe consequences if anything should befall them. Although Leopold saw the Pillnitz Declaration as a way of taking action that would enable him to avoid actually doing anything about France, at least for the moment, Paris saw the Declaration as a serious threat, and the revolutionary leaders denounced it.[10]

In addition to the ideological differences between France and the monarchical powers of Europe, disputes continued over the status of Imperial estates in Alsace,[10] and the French authorities started to become concerned about the agitation of emigré nobles abroad, especially in the Austrian Netherlands and in the minor states of Germany. In the end, France declared war on Austria first, with the Assembly voting for war on 20 April 1792, after the presentation of a long list of grievances by the newly appointed foreign minister Dumouriez.[11]

Dumouriez prepared an immediate invasion of the Austrian Netherlands, where he expected the local population to rise against Austrian rule. However, the revolution had thoroughly disorganized the French army, which had insufficient forces for the invasion. The soldiers fled at the first sign of battle, deserting en masse, and in one case murdering Théobald Dillon, their general.[11]

While the revolutionary government frantically raised fresh troops and reorganized its armies, an allied army under Charles William Ferdinand, Duke of Brunswick assembled at Koblenz on the Rhine. In July 1792 the invasion commenced. Brunswick's army, composed mostly of Prussian veterans, took the fortresses of Longwy and Verdun.[12] The Duke then issued a declaration on 25 July 1792, which had been written by the brothers of Louis XVI, that declared his [Brunswick's] intent to restore the King to his full powers and to treat any person or town who opposed them as rebels to be condemned to death by martial law.[11] This motivated the revolutionary army and government to oppose the invaders by any means necessary,[11] and led almost immediately to the overthrow of the King by a crowd which stormed the Tuileries Palace.[13]

The invaders continued, but at Valmy on 20 September 1792 they came to a stalemate against Dumouriez and Kellermann in which the highly professional French artillery distinguished itself. Although the battle was a tactical draw, it gave a great boost to French morale. Furthermore, the Prussians, facing a campaign longer and more costly than predicted, decided against the cost and risk of continued fighting, and determined to retreat from France to preserve their army.[14]

Meanwhile, the French had been successful on several other fronts, occupying Savoy and Nice in Italy, while General Custine invaded Germany, capturing Speyer, Worms and Mainz along the Rhine, and reaching as far as Frankfurt. Dumouriez went on the offensive in Belgium once again, winning a great victory over the Austrians at Jemappes on 6 November 1792, and occupying the entire country by the beginning of winter.[14] 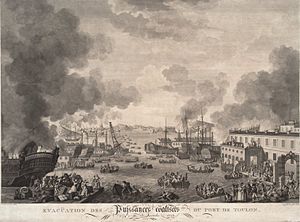 The British evacuation of Toulon in December 1793

On 21 January the revolutionary government executed Louis XVI after a trial.[15] This united all European governments, including Spain, Naples, and the Netherlands against the Revolution. France declared war against Britain and the Netherlands on 1 February 1793 and soon afterwards against Spain. In the course of the year 1793 the Empire[which?], the kings of Portugal and Naples and the grand-duke of Tuscany declared war against France. Thus the First Coalition was formed.[16]

France introduced a new levy of hundreds of thousands of men, beginning a French policy of using mass conscription to deploy more of its manpower than the other states could,[14] and remaining on the offensive so that these mass armies could commandeer war material from the territory of their enemies. The French government sent Citizen Genet to the United States to encourage them into entering the war on France's side. The newly formed nation refused and remained neutral throughout the conflict. 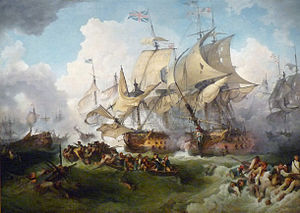 1794 brought increased success to the revolutionary armies. Although an invasion of Piedmont failed,[citation needed] an invasion of Spain across the Pyrenees took San Sebastián, and the French won a victory at the Battle of Fleurus, occupying all of Belgium and the Rhineland.[14]

Action extended into the French colonies in the West Indies. A British fleet successfully captured Martinique, St. Lucia, and Guadeloupe, although a French fleet arrived later in the year and recovered the latter.[17]

After seizing the Low Countries in a surprise winter attack, France established the Batavian Republic as a puppet state. Even before the close of 1794 the king of Prussia retired from any active part in the war, and on the 5 April 1795 he concluded with France the Peace of Basel, which recognized France's occupation of the left bank of the Rhine. The new French-dominated Dutch government bought peace by surrendering Dutch territory to the south of that river. A treaty of peace between France and Spain followed in April. The grand duke of Tuscany had been admitted to terms in February. The coalition thus fell into ruin and France proper would be free from invasion for many years.[18]

Britain attempted to reinforce the rebels in the Vendée by landing French Royalist troops at Quiberon, but failed,[19] and attempts to overthrow the government at Paris by force were foiled by the military garrison led by Napoleon Bonaparte, leading to the establishment of the Directory.[20] [21]

On the Rhine frontier, General Pichegru, negotiating with the exiled Royalists, betrayed his army and forced the evacuation of Mannheim and the failure of the siege of Mainz by Jourdan.[22] 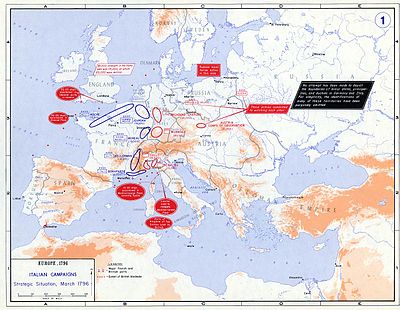 The French prepared a great advance on three fronts, with Jourdan and Jean Victor Marie Moreau on the Rhine, and Napoleon Bonaparte in Italy. The three armies were to link up in Tyrol and march on Vienna.

In the Rhine Campaign of 1796, Jourdan and Moreau crossed the Rhine River and advanced into Germany. Jourdan advanced as far as Amberg in late August while Moreau reached Bavaria and the edge of Tyrol by September. However Jourdan was defeated by Archduke Charles, Duke of Teschen and both armies were forced to retreat back across the Rhine.[22][23]

Napoleon, on the other hand, was completely successful in a daring invasion of Italy. In the Montenotte Campaign, he separated the armies of Sardinia and Austria, defeating each one in turn, and then forced a peace on Sardinia. Following this, his army captured Milan and started the Siege of Mantua. Bonaparte defeated successive Austrian armies sent against him under Johann Peter Beaulieu, Dagobert Sigmund von Wurmser and József Alvinczi while continuing the siege.[23][22]

The rebellion in the Vendée was also finally crushed in 1796 by Louis Lazare Hoche.[23] Hoche's subsequent attempt to land a large invasion force in Munster to aid the United Irishmen was unsuccessful.[17] 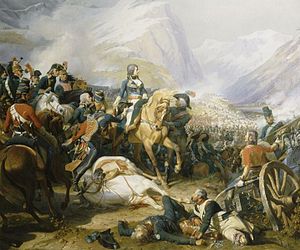 On 2 February Napoleon finally captured Mantua,[24] with the Austrians surrendering 18,000 men. Archduke Charles of Austria was unable to stop Napoleon from invading the Tyrol, and the Austrian government sued for peace in April. At the same time there was a new French invasion of Germany under Moreau and Hoche.[24]

On 22 February, a French invasion force consisting of 1,400 troops from the La Legion Noire (The Black Legion) under the command of Irish American Colonel William Tate landed near Fishguard in Wales. They were met by a quickly assembled group of around 500 British reservists, militia and sailors under the command of John Campbell, 1st Baron Cawdor. After brief clashes with the local civilian population and Lord Cawdor's forces on 23 February, Tate was forced into an unconditional surrender by 24 February.

Austria signed the Treaty of Campo Formio in October,[24] ceding Belgium to France and recognizing French control of the Rhineland and much of Italy.[23] The ancient Republic of Venice was partitioned between Austria and France. This ended the War of the First Coalition, although Great Britain and France remained at war.